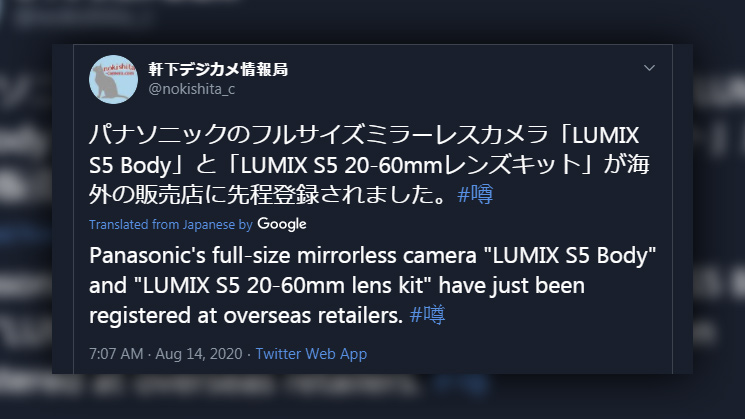 It seems that the fives are all around lately. Nikon just announced the Z5, there are rumours that Sony is getting ready to announce an A5 (or A6) and now, according to Nokishita, it seems that Panasonic is preparing to launch the S5 – an entry-level full-frame L mount mirrorless camera to compete with the likes of the Nikon Z5 and Canon EOS RP.

They say that the Lumix S5 body along with a kit containing the S5 and a 20-60mm kit lens have been registered at “overseas retailers”. Obviously, “overseas” just means “not China”, but they don’t say exactly where in the world they’ve been registered.

The popularity of Panasonic’s S1, S1H and S1R mirrorless cameras is undisputed and the S1H still seems to be the best full-frame mirrorless camera to go for if video’s your thing (despite the EOS R5 and Sony A7S III), but they’re out of reach for many beginner photographers who aren’t ready to invest that kind of money into a new camera.

Sure, those folks could go with one of Panasonic’s Micro Four Thirds cameras, but where’s the fun in that? And where’s the incentive to upgrade to one of the higher-end L mount models in the future if all their lenses are MFT and you can’t adapt lenses between the two systems?

So, it makes sense for Panasonic to finally start targeting this sector of the full-frame market. Now that the model name is reported to have been registered at retailers, it probably won’t be long until we start seeing some leaks, teasers and an eventual official announcement.