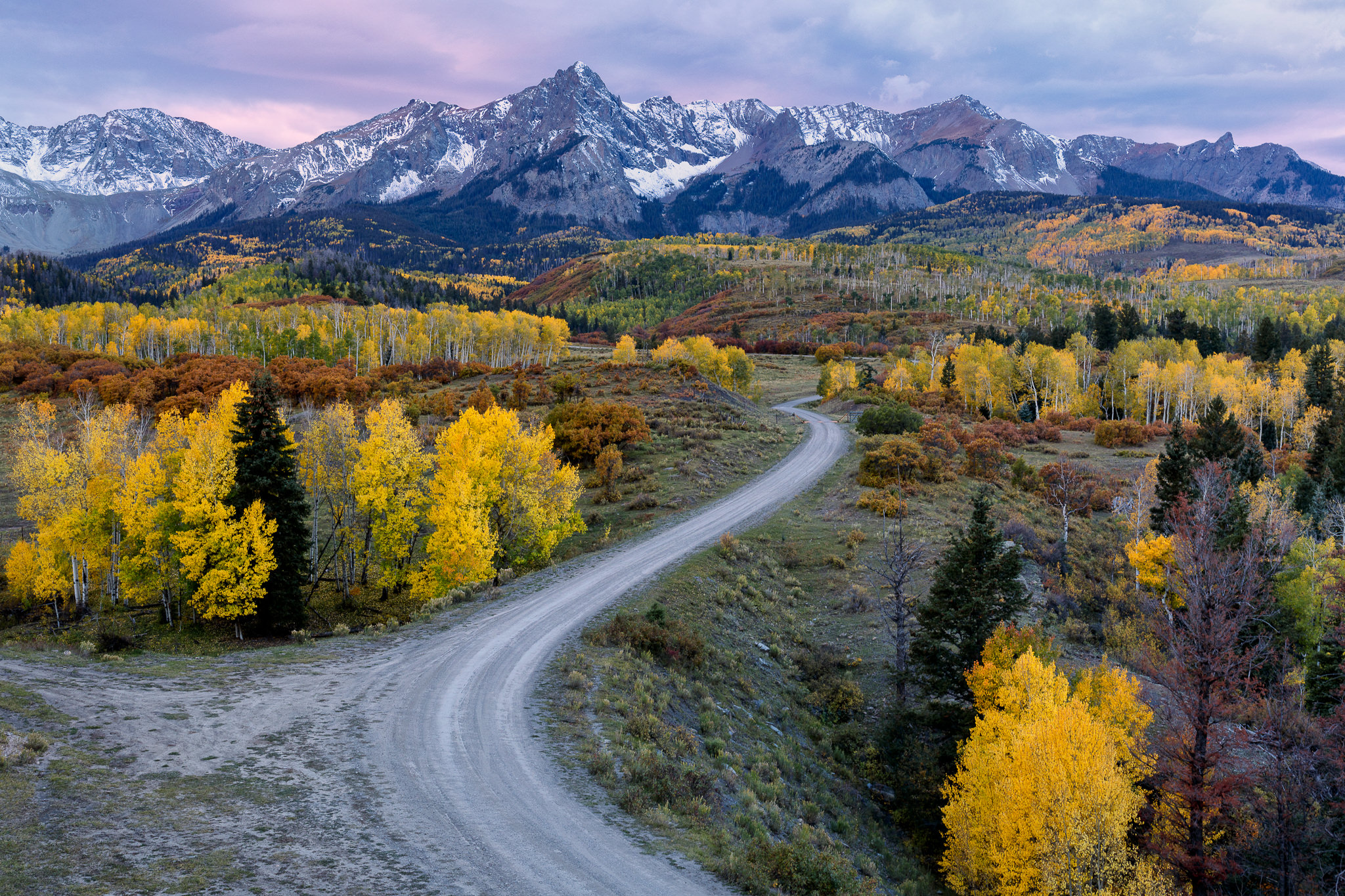 I have been in the Southwest part of Colorado for about a week now, waiting for the haze to clear up, and the weather to change a little. While here, I wanted to see how the San Juan mountains look this year, with all the drought and COVID-19 restrictions. Although the drought has surely done its damage to the environment (and temps are still hovering around 80F every day), it seems like all air travel has switched to cars and RVs, as the whole Ridgway / Ouray / Telluride area has been overrun by tourists this year. I have never seen this many cars on the roads – it is absolutely insane!

Unfortunately, the locals don’t seem to like this sudden influx of tourists to the area, so they are taking precautionary steps to protect their lands. And I don’t necessarily blame them – photographers, hunters and fishers have already done their part in damaging sensitive areas, trespassing private lands, all for the sake of getting their next trophy, or their next Instagram-worthy shot. While for the rest of us who have been coming to these beautiful places for decades, access to a number of places will be off-limits going forward, and our pictures are going to be spoiled by ugly fencing and barbed wires.

Speaking of barbed wire, along with some of the deadly weapons out there, barbed wire is without a doubt one of the worst inventions in human history. Barbed wire is just nasty, and although its primary purpose is to keep people away from private land, so many animals get trapped and injured by it. I think the saddest thing I have ever seen in the San Juan area, was when I witnessed an elk that was shot in the stomach get stuck on the barbed wire. It could not move in any direction, bleeding to death. I wish I had a gun with me to put the poor thing out of its misery.

Hunters that come to this area are known to trespass and shoot animals in private lands – that has been happening for many years here. But now, there is a different kind of hunter that’s overwhelming the area – one that’s hungry for a picture, and one that will do anything to get it. This type does not seem to care about “keep out” and “no trespassing” signs, as the result is all that matters, especially when the competition is so fierce. These people are willing to push themselves to the limits, as long as their photo is slightly better than the other guy’s.

The locals are responding appropriately, taking rather extreme measures. Take a look at the following barbed wire along County Road 9, which is famous for its beautiful scenery and overlooks:

Yup, that’s five levels of barbed wire that is now installed for a few miles along some of the most beautiful area on this road! Someone really hated all the photography “hunters” from getting into their lands and their beautiful aspen groves, so they decided to make sure that does not happen again.

Honestly, I don’t know who to blame more for all this – us photographers, or them land owners. Those who were with me that day 6-7 years ago, as I was conducting my Colorado fall colors workshop might remember when I was threatened to be shot if I didn’t leave their land immediately. My car was parked on the side of the public road (and I was not trespassing any private land) and I stopped to take a picture with my group. The worst part of this, is that I knew it was not the actual land owner who threatened me – it was someone who was renting a wooden cabin along CR9 and felt privileged to threaten the tourist. I didn’t argue (as he was the one with the gun), and we took off, but it surely left a very negative impression that day. The locals all seem to be wonderful people, so it was surprising to see such nasty behavior in these areas.

Speaking of the locals, there are very few people from Colorado who actually own lands in these areas nowadays. I know a number of people from the Ridgway / Ouray area that grew up here – they simply don’t have the means to be able to buy up and maintain so much land. Most of the private land belongs to people from other states, and over the past few years, they have been buying up more, especially near more “exotic” locations like Telluride. Driving up on the last stretches of the Last Dollar Road, I couldn’t help but notice how much more new development is taking place there. A lot of land is being sold for a premium these days, especially with the whole COVID-19 pandemic, and wanting to live in more “remote” locations.

Don’t get me wrong, I am not trying to blame the outsiders for all the changes that have been taking place here. It is probably not all photographers and hunters to blame for either. I think the truth is somewhere in-between…

I can’t wait for the pandemic to be over. It would be good to come back to the good ol’ days. I just have a feeling it will never be the same again.