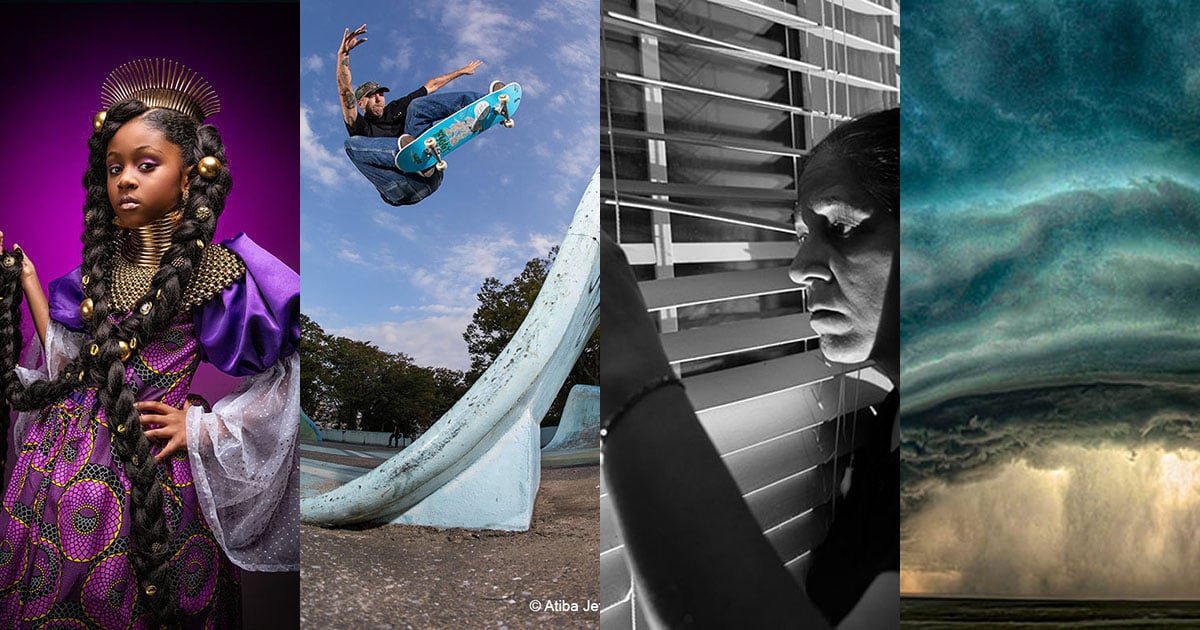 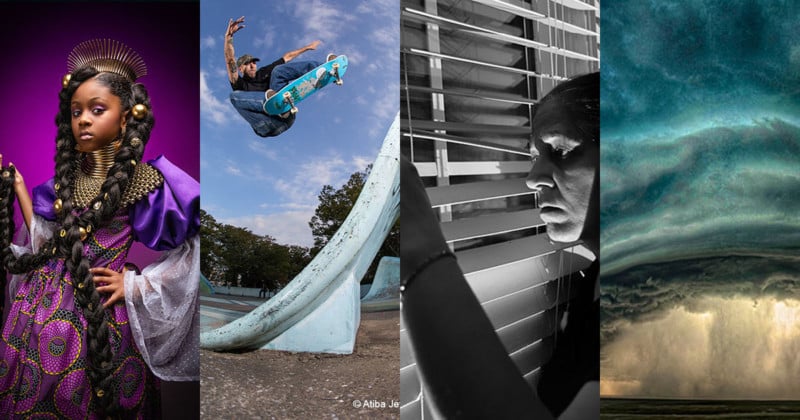 “Images can be described in such a way that it affects the hearts of those who see them. In that instance, the purpose of being a photographer comes full circle.” — Lynsey Weatherspoon

Kahran/Regis Bethencourt (CreativeSoul):  Cultural Storytellers
World-renowned child photographers, Regis and Kahran Bethencourt, are a husband and wife duo and the imaginative forces behind Atlanta, GA-based CreativeSoul Photography. The pair gained global recognition with their AfroArt series as a way to empower kids of color around the world.

“We don’t want to just question traditional standards of beauty – we want to shatter them.” — Kahran / Regis Bethencourt

Atiba Jefferson: Sports, Culture, and Portraits
Atiba Jefferson is best known for his 25 years of skateboarding photography. He has a deep history in basketball as well, being a staff photographer for the LA Lakers during the Shaq and Kobe years.

“I took myself for a serious journalist and I didn’t want to cover a rock ’n’ roll story,” Harry Benson tells PetaPixel.  “But when I first heard them begin to play All My Loving, I knew I was on the right story….and the story soon turned from a music story into a news story as Beatlemania took hold of the world.”

Notable: Between the 1940s and early 1990s, job-hunting photographers were often required to submit contact sheets with finished prints.

Thunderbolt 4 Products Fix a Big USB-C Problem – msn
Thunderbolt, the chief competitor to USB-C, is being used to fix one of the standard’s biggest problems: the absence of hubs and docks. The products, which take advantage of the new Thunderbolt 4 standard, will turn one port on a laptop into three ports in either the Thunderbolt or USB-C standard. Because of the data limitations of USB-C, the standard can’t support docks today on its own.

Quiz: Will the new Thunderbolt 4 be faster than Thunderbolt 3? No, but it will have other advantages.

‘They Used my Picture and I Should’ve Got Paid For It’ – BBC
Sean Heavey recognized his photo the moment he saw it on Stranger Things, the hit Netflix show. Netflix told him, “You can’t copyright Mother Nature.” He complained on social media, and his remarks were read by executives at Pixsy, a firm that helps photographers fight copyright infringement. Pixsy appointed a lawyer, David Deal, and together they found six more occasions where Netflix used The Mothership. Ultimately Netflix settled the lawsuit

Notable: How many images are stolen daily around the world. More than 2.5 billion.

Fact: A student of Chip Stewart, a media law professor at Texas Christian University, used an image from a Creative Commons website for the school newspaper. Though she did not have to pay a license fee, she did not follow the requirements listed under the photo, to credit the photographer or add a link to his website. Through Pixsy, the photographer found the student and issued her a letter asking for a $750 license fee. A search through public records revealed that the photographer had filed more than 40 similar cases that year. They negotiated him down and agreed to pay a fee of $500.

The Secrets of Film Noir Photography – Light Stalking
Film noir evokes scary, dramatic, and dark cinematic scenes typical for crime and thriller movies. Most of the time, in film noir photography, the subject would be partially thrown into darkness, revealing only parts of them. The dramatic shadows cast by strong lighting helps create a mysterious effect. Film noir look can be achieved with low-key lighting, so you do not need a complicated studio setup or expensive lighting equipment to achieve the film noir effect.

Tips: Do not shoot your image in black and white. It is good to shoot color and then convert it to black and white while post-processing. This way, you can create the look you are after by working on various colors individually in your film noir photograph.
Show mystery by photographing just parts of your subject’s body like chin, legs, hands, etc. to give an intriguing mood to the image.
Lighting and shooting your subject from a lower perspective can add drama and mystery to your film noir photograph as can harsh shadows.

Denis Reggie: The Photographer Who Changed Wedding Photography on his Most Memorable Photo – 11Alive WXIA
Canon Explorer of Light Denis Reggie’s photo of JFK Jr. kissing the hand of his bride Carolyn Bessette on Cumberland Island, GA, was credited by The Wall Street Journal as the 20th-century watershed image that transformed wedding photography forever. Reggie’s 1900 assignments include a captivating portrait of the late Senator Edward M. Kennedy, which featured on the cover of his autobiography and New York Times bestseller, True Compass.

Notable: The Smithsonian’s National Museum of American History in Washington, DC, has a 16×20 print of the above in its collection.

Quiz: What percentage of a wedding photographer’s time goes towards actual shooting? Only 4%. The vast majority (55%) is spent on photo editing, followed by business/admin (18%), culling (11%), and communication (7%).

Sony a7C Review  – PCMag
The Sony a7C takes its design cues from APS-C models like the a6600, but squeezes a stabilized full-frame sensor into similar confines. It is the take-anywhere full frame for the photographer who wants to travel lightly, but its viewfinder is smaller, and it doesn’t have the dual memory card slots for that secure feeling. It’s the second full-frame model from Sony to sport a vari-angle, touch-sensitive LCD and the autofocus system is a bit more capable than what you get with the older a7 III.

Quiz: Can EXIF (Exchangeable image file format) prove when a photo was taken? No, as it can be changed easily. Also, camera settings can be tweaked or set incorrectly. EXIF in your mobile phone photos will update when you change time zones, but conventional cameras usually have to be reset manually.

How to Develop B&W Film at Home: A Simple Guide for Mere Mortals
10 Best Cameras & Lenses of the Year: OP Editors’ Picks 2022
Tilta’s Camera Battery Grip Provides Up to 170% Longer Shoot Times
How to Achieve Compositional Balance in Photography
Rode’s NTH-100 headphones are now a headset with the new NTH-Mic microphone