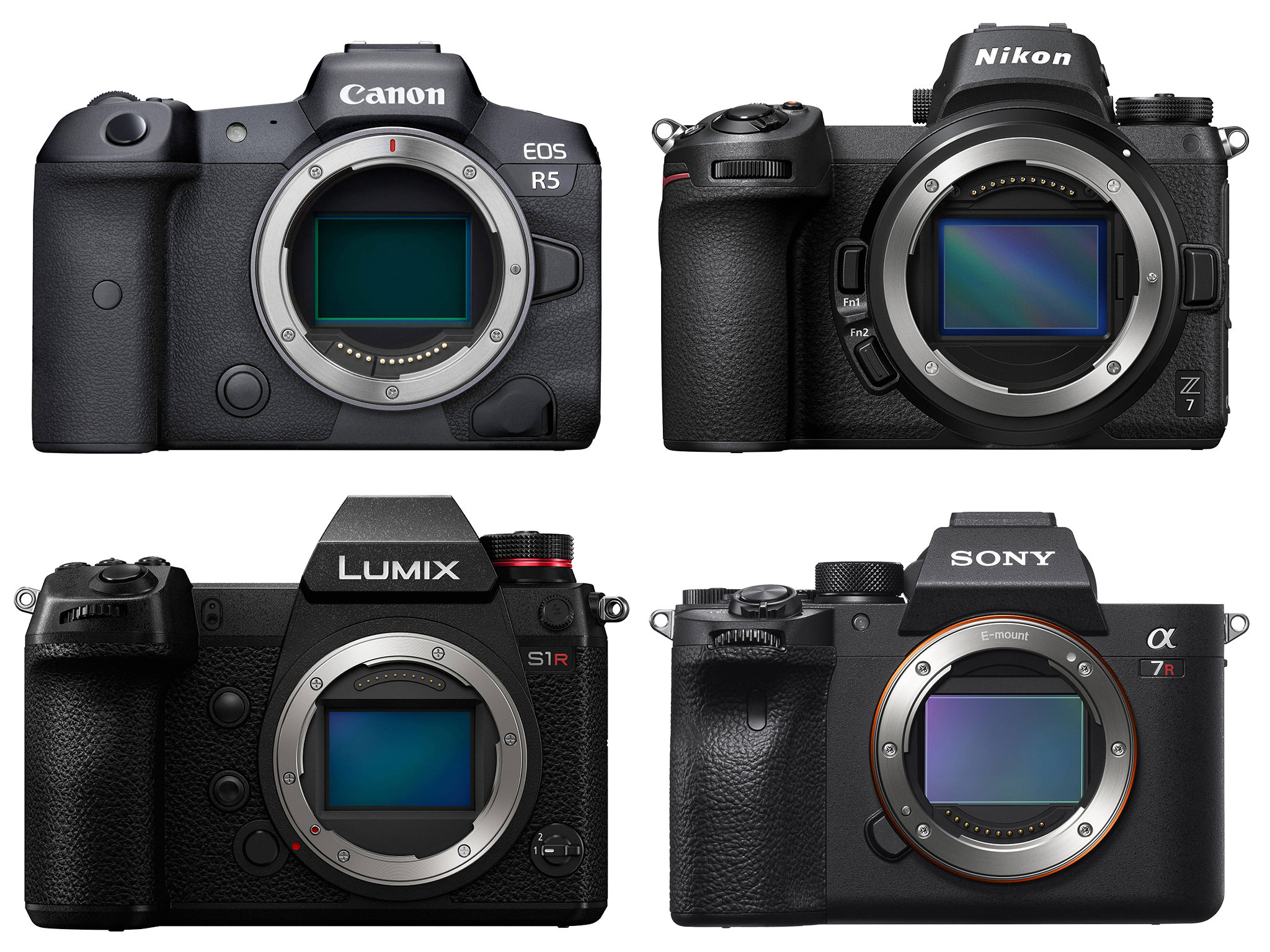 Please keep in mind that all discussions around camera ergonomics are highly subjective. Everything I point out below is based on my personal observations and experience, so if you do not agree with it, please let me know in the comments section below in a civilized manner.

Here is how the cameras appear from their front view: 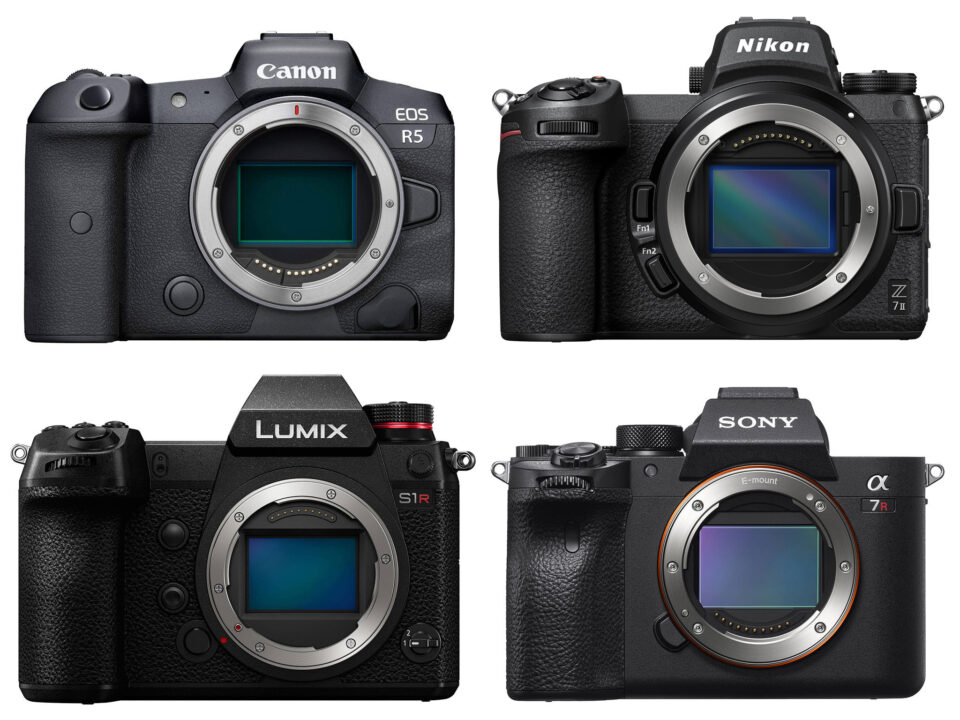 Obviously, all cameras appear differently from each other, but when it comes to personal preference of appearance and design, I would rank the Canon EOS R5 as the best overall-looking camera. Canon did a great job making it look very sleek, simple, and uncluttered – something it has always done well. All other cameras have a more edgy, modern look, which might be preferred by others.

Next, let’s see how these cameras differ in their ergonomics, button layout and grip size from the top: 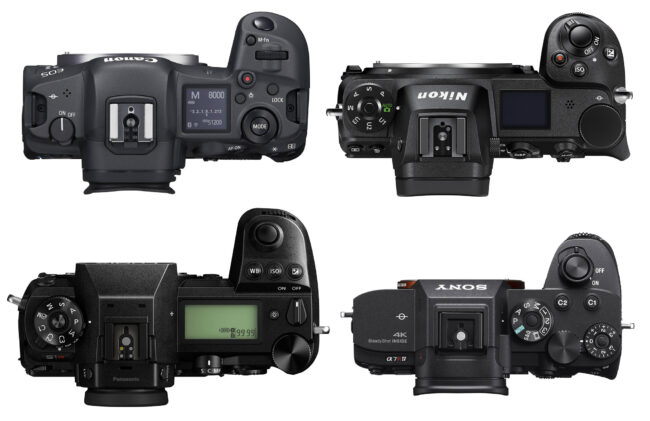 Obviously, each camera differs on its own depending on the brand’s past ergonomic designs. All cameras have deep, comfortable grips, so handling them should be quite similar. In terms of simplicity and user-friendly approach to design, the Canon EOS R5, Nikon Z7 II, and Panasonic S1R are all very similar – they have clearly marked buttons located in easy-to-reach parts of the camera. I personally have a huge gripe with cameras that feature unlabeled buttons, or buttons that don’t clearly define their purpose.

So for me, the Sony A7R IV is the loser here, with its C1 and C2 programmable buttons that I always have to wonder what they are programmed to. Sony also wastes quite a bit of space to the left of the side of the camera, while heavily cramming its right. It is also the only camera that does not feature a top LCD, which can be very useful in the field. Instead of having a flat surface with useless “4K SteadyShot INSIDE” marking, why not move the PASM dial to the left and add a top LCD? I know some Sony fans will disagree with me on this, but I am not the only person who grills Sony on its poor ergonomics and its cluttered menu system. Over the past 10 years, I have used almost every interchangeable lens camera on the market, and Sony’s mirrorless cameras have always been the least user-friendly for me.

Lastly, let’s take a look at the backs of each camera: 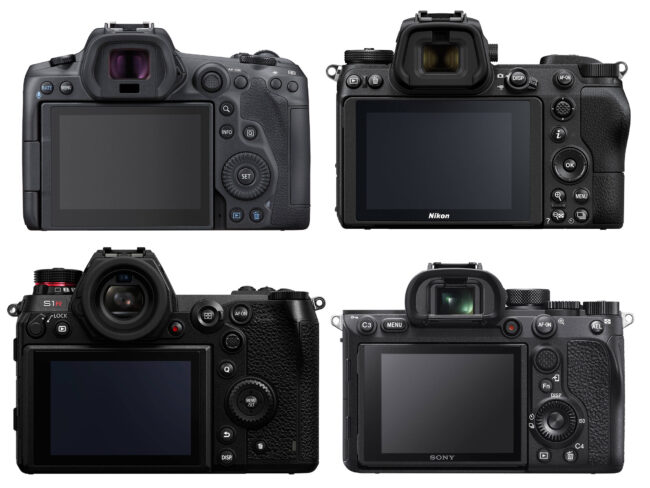 Once again, most of the designs follow the traditional ergonomic path by each camera manufacturer. Canon’s top-heavy button layout, the rotating dial, as well as a large joystick are going to be very familiar with Canon shooters. The fully articulating screen is an advantage for some, but others don’t like it as much due to interference with an L-bracket. While there are some solutions to this (like ProMediaGear’s L-Bracket for cameras with articulating screens), they are not particularly attractive, and usually come with a high price tag.

Nikon follows the same path of proven ergonomics, with slight modifications. I had no problem transitioning from a Nikon DSLR to the Z7 – Nikon did a great job keeping most of the controls the same, and the menu system has not been significantly changed either. And the Nikon Z7 II is essentially identical to its predecessor in ergonomics.

The Panasonic S1R also has a very clear, ergonomically-friendly button layout that is easy to understand and follow, even for a non-Panasonic shooter. The buttons feel great, are clearly labeled, and easy to reach with a thumb.

The Sony A7R-series cameras have gone through a number of ergonomic changes since the original A7R (which didn’t even have a joystick, requiring two button presses to move a focus point), so the A7R IV is quite refined in comparison. The large AF-ON button and the joystick are very comfortable to use, and the overall button placement is great. Once again, I wish buttons like C3 had their default function labels to make the camera more user-friendly.

The menu system is another topic that can be highly subjective. Personally, I have always been a fan of Canon and Nikon menus, and I can easily find a particular setting quickly and effectively. It is easy to develop muscle memory with these brands, especially after many years of use.

Canon typically uses a top-down menu approach, with pages of sub-menus indicated underneath, as shown below: 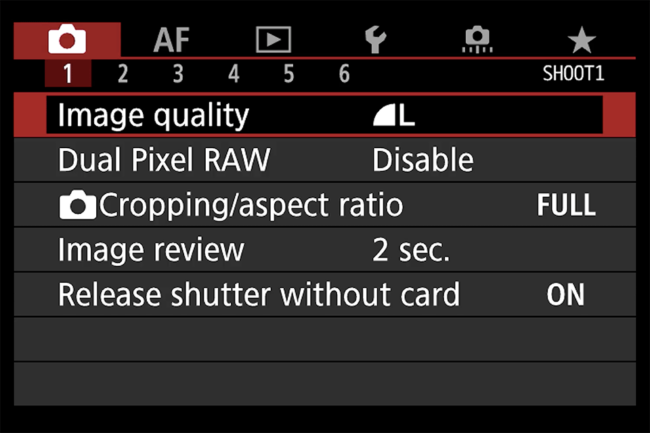 Nikon, on the other hand, uses a left-to-right menu approach, dividing the menu by different sections and sub-menus: 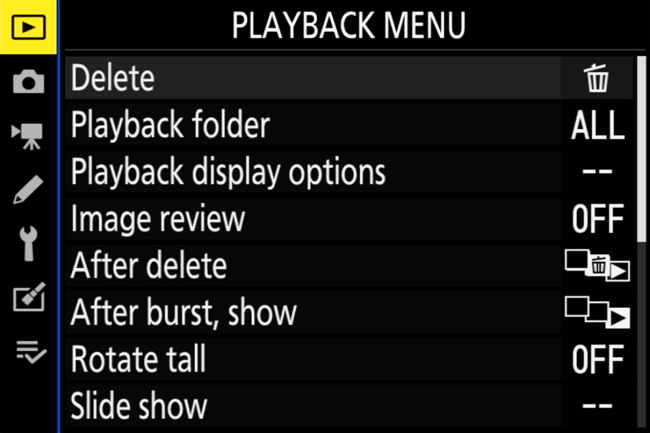 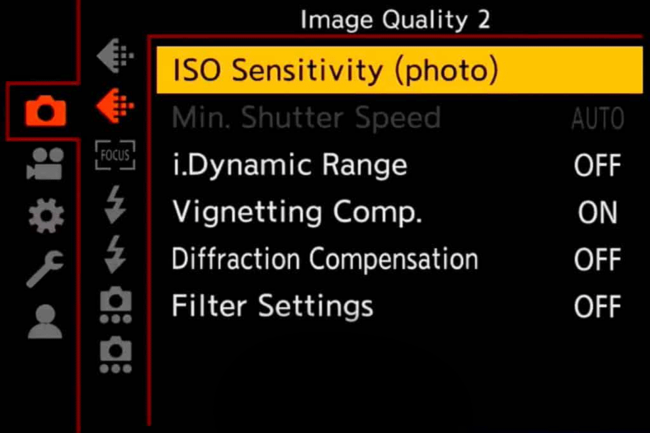 Sony has changed its menu system a number of times over the years, and the latest version uses a top-down approach. Sub-menus are grouped into pages, with labels like Setup2, Setup3, etc.: 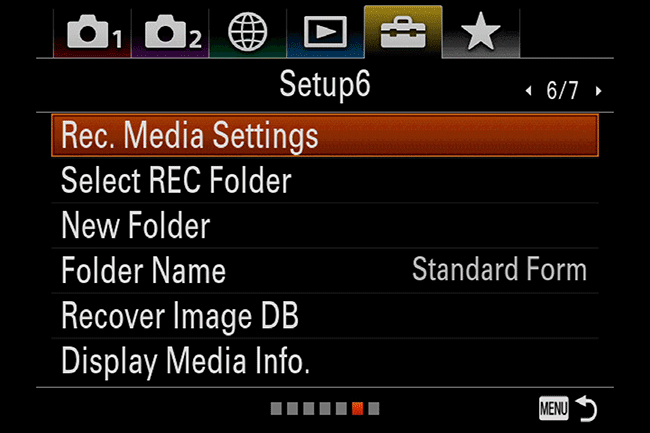 I personally find the Sony menu system to be the worst in the group. Sony sometimes uses cryptic language to describe some settings, which often does not fit the menu, so it is normal to see the menu with different-spaced menu fonts and weirdly cut-off words / sentences. For example, there are settings like “Reg Cust Shoot Set”, “Face Priority in Multi…”, “Auto Slow Shut.”, so on and so forth – just see my Sony A7R IV Recommended Settings article for an idea of what the menu system looks like. Menu settings are placed all over the place, and finding important settings can be very time-consuming. I personally find the Sony menu system to be an ergonomic disaster, but others say that it is not as bad once you get used to it.

Looking at the list, we can see that most of the features of the four cameras are quite comparable and similar. The Canon EOS R5 stands out with its 8K DCI video shooting capability, the fastest continuous shooting rate of 12 FPS, a huge buffer capacity of 180 RAW images, 10-bit HDMI video output, and superb autofocus low-light sensitivity of -6 to +20 EV. Unfortunately, all these features come at a high price premium of $3,899, making it the most expensive camera on the list.

The Nikon Z7 II is a well-rounded camera with the highest viewfinder magnification, 10-bit HDMI video output with HLG / HDR capability, and a very lightweight camera body. Its biggest weaknesses are viewfinder resolution (3.69 MP vs 5.76 MP) and a relatively low shutter durability rating of 200K (compared to 400-500K on competition). If you look at the last row on the chart, you will notice that it is the cheapest camera in the group at $3K MSRP, so it delivers a lot of value. Although the Sony A7R IV retails for about that same price today, its price was $500 higher at introduction.

The Panasonic S1R is another feature-rich camera. It has the fastest flash sync speed of 1/320, an impressive low-light sensitivity range of -6 to 18 EV, a superb triaxial-tilt LCD, and can shoot high-res 187 MP images using the pixel-shift mode. Its biggest disadvantage is the autofocus system that relies on contrast-detection AF rather than Hybrid AF, as well as its massive body that weighs 1020 grams, making it the heaviest camera on the list.

Sony obviously stands out with its impressive 61 MP BSI CMOS sensor, superb battery life, as well as a high-resolution pixel-shift mode that produces 241 MP images. Its autofocus system is arguably the most reliable and feature-rich for shooting fast action. The biggest negative of this camera, and something I have pointed out a number of times before in other articles, is its inability to shoot lossless-compressed RAW images. For some strange reason, Sony still has not added this feature to any of its mirrorless cameras. I also think shipping the camera with two SD UHS-II slots was a mistake, since CFexpress is so much faster. SD memory cards slow down the Sony A7R IV quite a bit, especially when the buffer clears out (inaccessible menu, lags, etc).

Let’s now take a look at the lens selection for each system. This is an important metric for any camera system, arguably even more important than the cameras themselves. Please note that I will only list native lenses for each mount by the camera manufacturer, and will not list any third-party lenses, as those are very difficult to count.

Sony’s dominance in available lenses is very clear from the above table. Being the oldest mirrorless player, Sony has been able to make a wide selection of both zoom and prime lenses for the full-frame Sony E mount, bringing a total of 44 lenses from Sony and Zeiss. Note that Sony basically dominates in every category, offering the biggest selection of ultra-wide, standard, and telephoto zoom lenses.

Next, we have the L Mount Alliance with a total of 33 lenses. With Panasonic, Leica and Sigma all developing lenses for their systems, the mount has gotten quite a few lenses since it got started. However, there is one problem here – quite a bit of overlap, with not much choice of different focal lengths. This system might look good in numbers, but needs a lot more selection of other lenses.

Canon RF has 15 lenses so far, which is not bad considering that these are mostly high-quality, pro-grade lenses. Nikon is in the last place here, having only 14 lenses released, so it is certainly at a disadvantage.

Lastly, if you look at the Super Telephoto Prime category, you will notice that both Canon and Sony have 2 primes. However, it is important to point out that the Canon RF super-telephoto lenses that have been announced with the EOS R5 and R6 cameras have a maximum aperture of f/11, and they cannot be directly compared to the high-end 400mm f/2.8 and 600mm f/4 options from Sony. This shows that Sony is basically the only player on the list of mirrorless systems to offer professional-grade super-telephoto lenses. Although Nikon promised a 400mm and 600mm prime in its Nikon Z Lens Roadmap, we do not know what types of lenses will be released and when.

Overall, this one is a huge win for Sony. It will take a few years for all other manufacturers to catch up, and by then, Sony will have even more lens options available.

As you can see, each camera and camera system has its pros and cons. The cameras are quite similar in terms of their overall ergonomics, with the Sony A7R IV being my least favorite of the group due to its cluttered menu system and buttons. When it comes to features, the cameras are once again quite comparable, although it all depends on your priorities and your system of choice. The Canon EOS R5 and the Sony A7R IV stand out with their unique features (8K on EOS R5 and 61 MP sensor + pixel-shift on A7R IV) and excellent and mature autofocus capabilities (A7R IV). When it comes to lens selection, the Sony E mount is the clear winner here. It is the most mature system and has a wide array of lenses for basically every need.

My top pick today would probably be the Sony A7R IV, primarily because of its maturity and wide lens selection. However, I have a huge distaste for its overall ergonomics and the menu system. I have always preferred Nikon’s ergonomics, so the Z7 II makes the most sense for me. Plus, every lens Nikon has released so far is pretty spectacular, beating its F-mount counterparts in every way. Having recently shot with Canon’s mirrorless cameras, I have to say that this is another system that looks very promising right now. Canon’s RF lenses are all stunning, and I really like that Canon is putting so much emphasis on lens development. This is one area the L-mount alliance should really focus on (and hopefully coordinate lens releases to reduce overlap_. Let’s not forget that most photographers don’t have deep pockets to buy exotic Leica lenses.

Let me know what you think in the comments section below!