I remember when my office had a 10-Megabytes drive (Mega, with an M). It was (give or take) the size and weight of a car tire. A few weeks ago, I got the T7 SSD from Samsung. It is two Terabytes big and the size of a credit card. I feel old.

Not only does this drive boasts an impressive 2TB storage, but it also claims to run at read speeds up to 1,050 MB/s and writes at speeds up to 1,000 MB/s.  This is quite impressive, so, of course, we had to put it to the test.

The T7 comes in a very clean, minimalistic package. It has the drive, 2 cables: USB Type C-to-C and Type C-to-A and some papers. This is it. It fits the main claim of the drive: Packing great storage in a minimal form factor.

The cables are relatively short, and you’d want to keep them. They are good quality cables that can handle the transfer speed. Cheaper cables may struggle if you are trying to push the upper-speed limits.  They are also relatively short, which makes sense; longer cables do not excel at high transfer speeds. Yet. That said, each of the cables is 45 cm, which is more than enough for most standard usages.

There is a lot to say in favor of thin drives. They fit in bags, tech-cases, even in pockets. This is why I have been a great fan of the Samsung T series for a long time now.

The T7 does not require much. Plug the USB-C end of the cable to the drive, the other end (C or A) to a computer, and you are good to go. There is a handy small LED light that lights on when the drive is connected, and that is it. Like other SSDs, it has no moving parts, so it completely silent.

If the drive is working, that little LED starts blinking and when you “eject,” it turns red, then goes off, so you know it is safe for removal.

Transfer speed will vary by your computer USB type. With a fully-fledged USB 3.2 Gen 2, you can get up to around 1,000 MB/s. There is an asterisk on this, and I will get to it later.

I installed Blackmagic’s disk tester for a speed benchmark, and it scored quite nicely.

We could get about 760 MB/s write and about 918 MB/s read, which, considering overhead, is quite impressive. 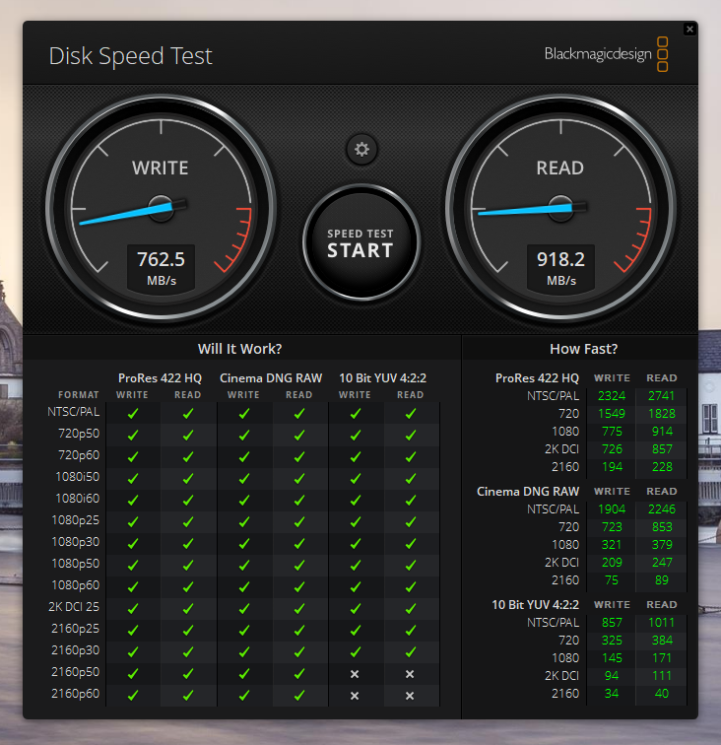 I also tried using the drive with my Samsung S9 phone. It worked like magic, and I immediately got the T7 to display on my solid explorer.  If your workflow involved editing with a phone or a tablet, the T7 would be amazing for that. The huge storage combined with the fast speeds would make it an ideal tool for on the go usage.

Sadly, most of the apps that I tested do not recognize the T7 yet, so you would have to move things in and out of the drive to work on them on YouTube or Adobe Rush, for example. I predict that the more common external drives become, the more apps will provide native support for them.

The T7 and BMPCC

While the T7 is great for computer use, I had had issues with the drive when we hooked it up to a Black Magic Pocket Cinema Camera 4K.

I usually use the BMPCC with a Samsung T5, so I was kinda excited about the upcoming offloading speed boost. Sadly, when I plugged the drive, the camera gave us a little exclamation mark telling us that the drive would drop frames. After some research, I stumbled into some threads saying that there is a compatibility issue between the BMPCC and the T7. SO if you are getting a drive for your Blackmagic, stick with the T5.

Using Long Working Distance Macro Lenses with Your Camera
Make Your Photos Look 3D with Dodge and Burn in Capture One 23
UV Filter: Should You Use One on Your Camera Lens?
Tilta’s Camera Battery Grip Provides Up to 170% Longer Shoot Times
Film Photography: A Complete Guide