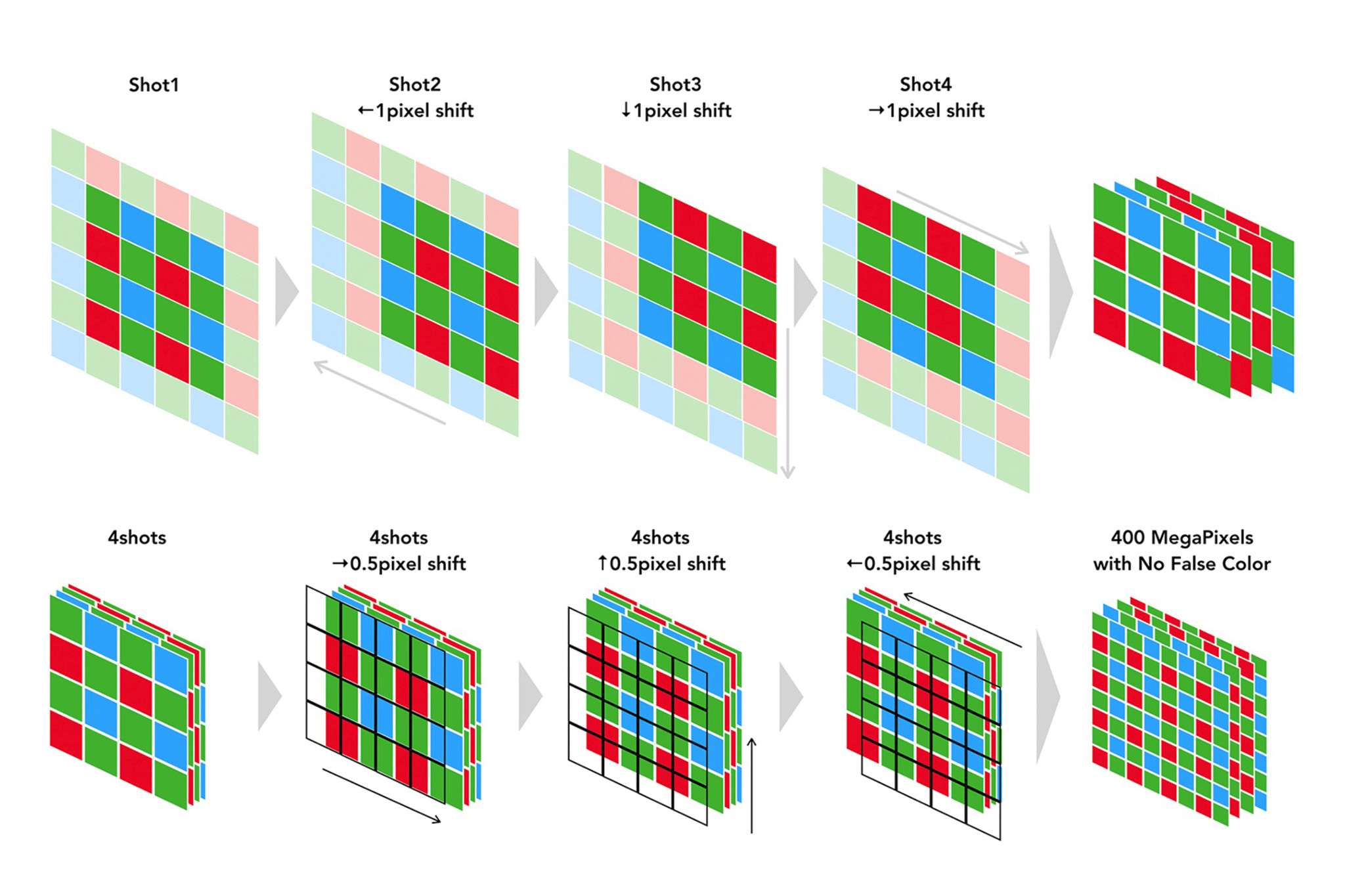 It is a great day for all Fujifilm fans, since the company has just released its first version of Pixel Shift on the GFX 100. If you have never heard of Pixel Shift, this technology allows a camera with in-body image stabilization (IBIS) to shift the sensor by up to a pixel (hence the name) in several directions, capturing several frames, in order to stitch them together for a single, high-resolution photo with maximum detail and color accuracy. In the case of the GFX 100, the camera will be able to stitch up to 16 RAW images in order to yield a 400 MP RAW image.

In essence, Pixel Shift can effectively lift the limitations of the Bayer filter. With each pixel in the final image being able to store correct RGB color, the effect of false color is essentially greatly decreased.

The Fujifilm GFX 100 gains this functionality in the new firmware v3.00, which is available to download immediately. Unfortunately, the camera itself is not able to produce a single RAW image that combines the images together. Since that’s a very CPU-intensive task that would take a very long time to complete, you will need to utilize Fuji’s new Pixel Shift Combiner software on your Mac or PC instead.

Here is how the Pixel Shift workflow for the GFX 100 looks like:

At this point, only Capture One is mentioned as the software that is able to read the resulting DNG image, but considering how many Lightroom users are out there, Adobe will likely add support in the future as well.

Here is an example of the resulting high-resolution image:

As you can see, the amount of detail produced by the Pixel Shift feature greatly exceeds that of the single image. There is also practically no false color in the final image.

One major limitation of Pixel Shift on all cameras, is that it requires a very steady scene. This means that if you are shooting a landscape and have moving elements (such as water, clouds, leaves or grass), the final image might have a lot of undesired artifacts. Ideally, Pixel Shift should be used in extremely steady environments (studio, interior architecture, macro, etc), and it is a given that the camera should be mounted on a very steady tripod, with no chance for camera shake.

Why is this news exciting for all Fujifilm users? Because the Pixel Shift feature might be rolled out to other Fujifilm cameras with IBIS in the future. The potential candidates for Pixel Shift are cameras like Fujifilm X-H1 and X-T4. Although these cameras have an X-Trans array instead of Bayer, it should still be possible to move the IBIS system to capture more details – just in a slightly different way. I hope Fuji strongly considers implementing Pixel Shift on its APS-C line of cameras.

For more information on this announcement, please see Fuji’s press release. Also, don’t forget to check out my detailed review of the Fuji GFX 100.

Nikon, please take a note – I would love to see Pixel Shift on the Nikon Z6 and Z7 cameras! IBIS is already there, so it should be a no-brainer…

ZY Optics calls its new Mitakon Speedmaster 90mm f/1.5 a “budget alternative” to the Leica Summilux-M
Questmas is back and better than ever
Godox’s third generation of “Quicker” QTIII series strobes bring LED modelling light and more efficient bulb design
Back to work: The shifting visual of the “modern office” within commercial Licensing
The Best 70-200mm Zoom Lenses