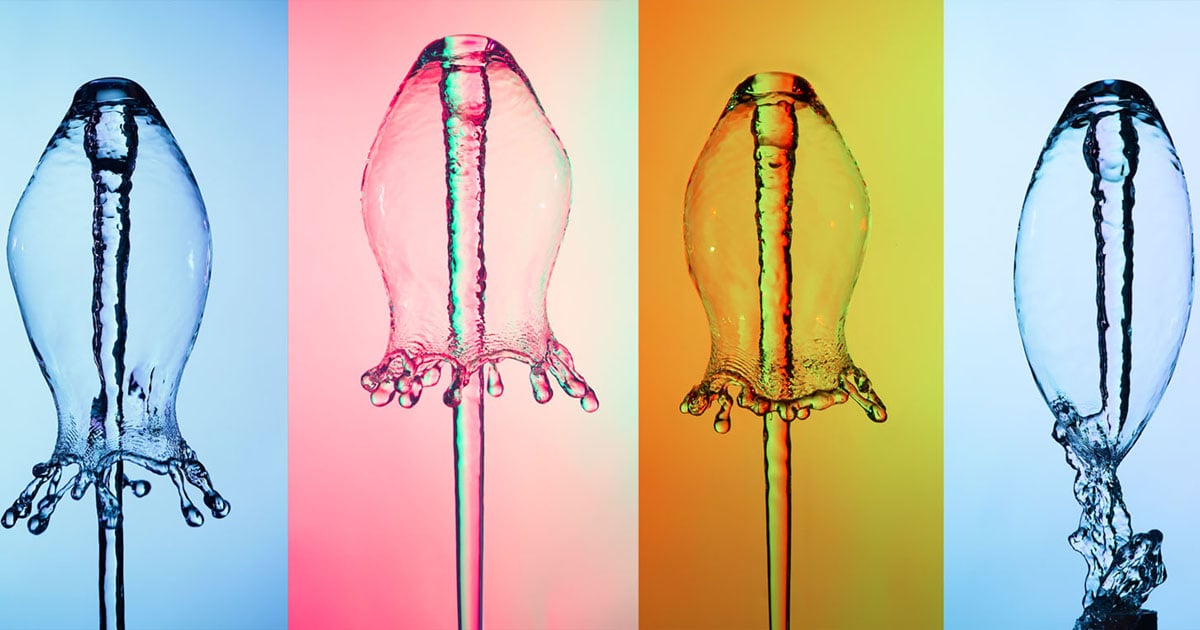 Each year I update experiments in the collection of the High-Speed photography lab at Rochester Institute of Technology (RIT). One of this year’s additions is an air-powered water bell.

Recently, this type of system has come to my attention by its use in several advertisements. The build for this device is very simple and inexpensive assuming that you have access to a small shop air compressor. 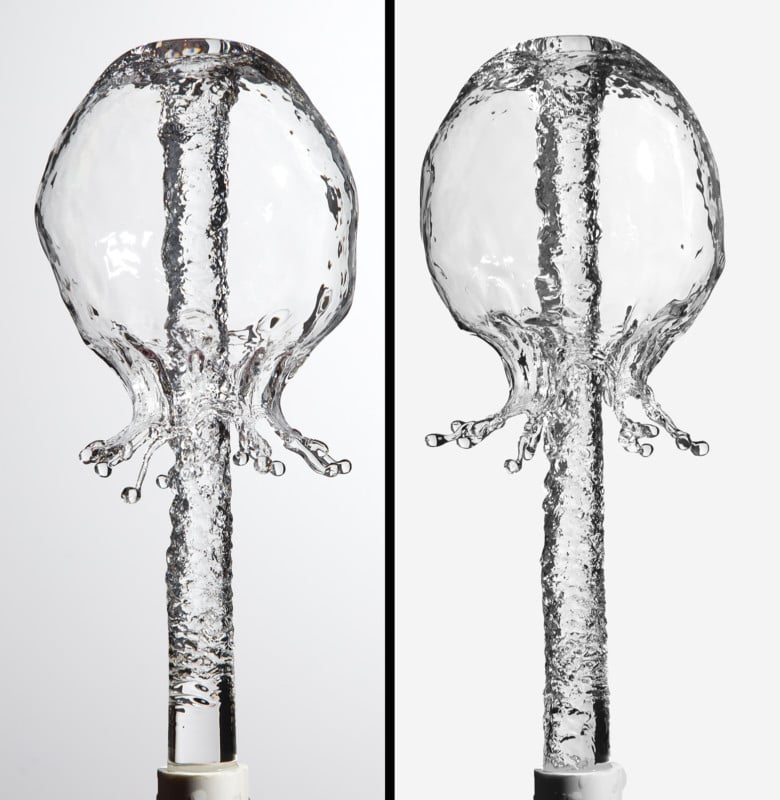 The air compressor has a built-in regulator that is set to 35 psi and I use a 12V DC Normally Closed air valve. Since the air valve has to be precisely controlled, I use an Arduino to make a voltage pulse to open the valve. In the image above, the air valve was open for 65 milliseconds.

There are a number of ways to control the flash, and here I used a simple reed switch to control a Profoto B1X 500 flash set to one of the fastest settings. The flash can be triggered from the Arduino or an IR trigger can be used that sets off the flash when the water bell has risen to the desired height. Working with the students I often use the IR trigger since it is good experience. The water bell is very repeatable if the water is filled to the same location for each trial. 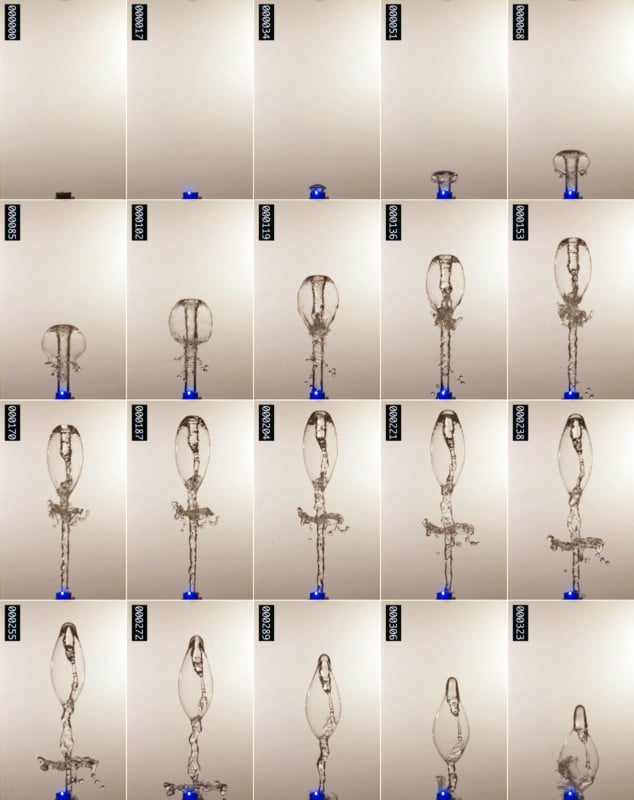 Above is a typical sequence of shapes from the water bell system. Imaged with a Chronos camera running at 1057 frames per second (www.krontech.ca). The blue LED light at the bottom of each frame is an indicator that turns on when the air valve is opened. The start of the blue light is a reference for timing with the microprocessor. Between each of the images above is 16 ms. This full sequence covers .305 seconds. The largest the water bell forms in this sequence is about 12 cm in diameter. In this sequence, the air valve was open for 75 ms. and the compressor was set to 35 PSI. 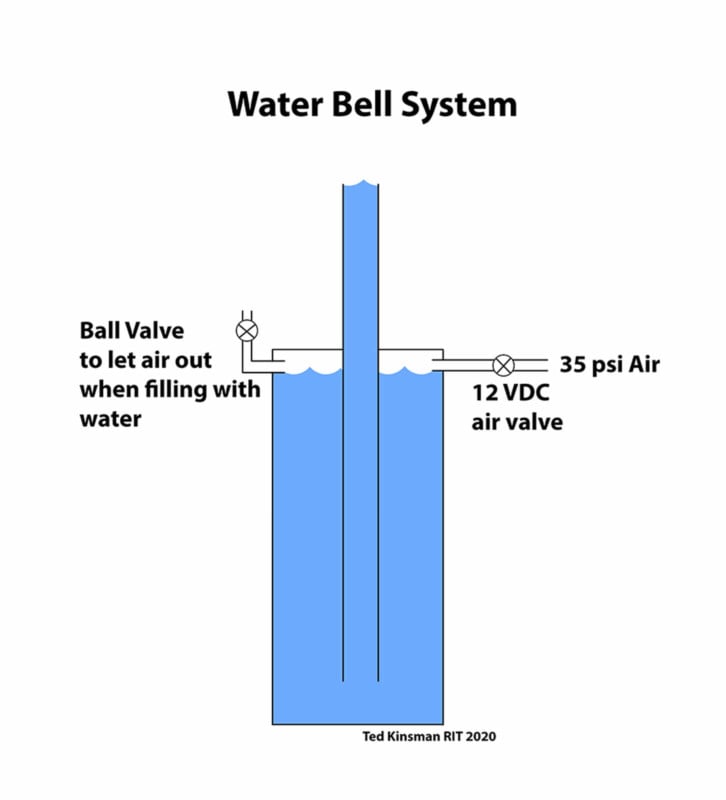 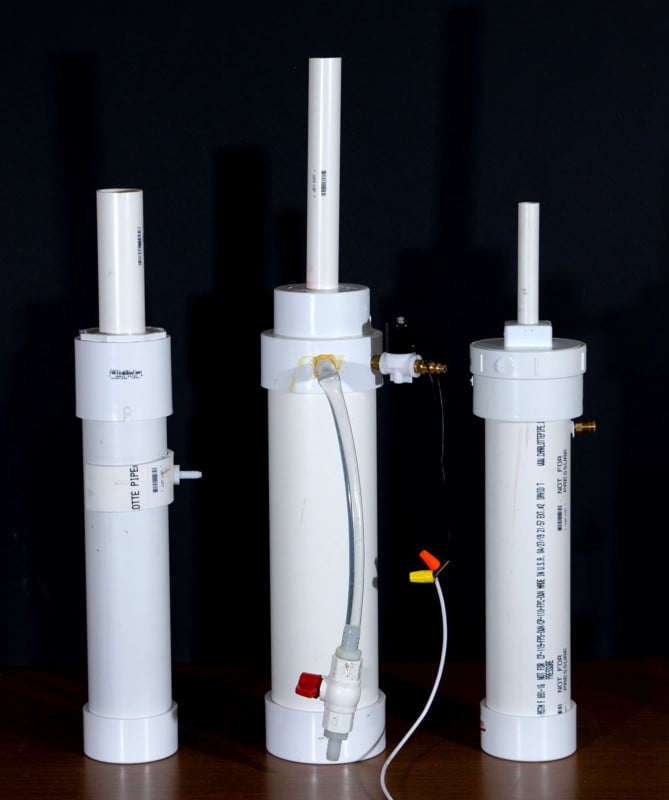 Various water bell tubes. The center tube was used for the images in this paper and measures 29 inches high. The large pipe is 4 inches in diameter and is 17 inches high. The center tube is 1-inch diameter PVC and starts 1.5 inches above the bottom and extends to 29 inches above the table. The center system has an extra cap glued to the top for stability. There are numerous ways of combining PVC fittings to making these systems.

/*
* Water-Bell2020
* Ted Kinsman emkpph@rit.edu
* Assistant Professor of Photographic Sciences
* at Rochester Institute of Technology (RIT)
* Nov 6, 2020
* this program sends a pulse to an air valve
* from a push button.
* This system will trigger a flash a bit after the pulse
*/

int ValvePause = 65; // set delay to let solenoid open door (milliseconds)
int flashDelay = 215; // Set a delay for flash to be triggered: adjust
// this for part of collision you want to photograph

buttonState = digitalRead(StartButton); // reads value of button
if (buttonState==HIGH) { //starts the sequence to open the valve if the button is pressed

delay(5000); // keeps the system in a pause mode to avoid false triggers
digitalWrite(LED, LOW); //turns off the LED
// Note: when the LED is off the system is ready to fire

About the author: Ted Kinsman is the 2019 recipient of the Schmidt Laureate or outstanding contributions to the progress of biocommunications. Kinsman has worked as an optical engineer, a physicist, and a physics instructor before joining the Photographic Sciences Dept. at RIT. His work has appeared on The Discovery Channel, Crime Scene Investigations (CSI), The X-Files, South Park, The Tyra Banks Show, and The Frozen Planet series. Kinsman is currently an Associate Professor in the school of Photographic Arts and Sciences (SPAS) where he teaches Photographic Instrumentation, Scanning Electron Microscopy, and High-Speed Imaging. His most recent book is Cannabis: Marijuana under the microscope.