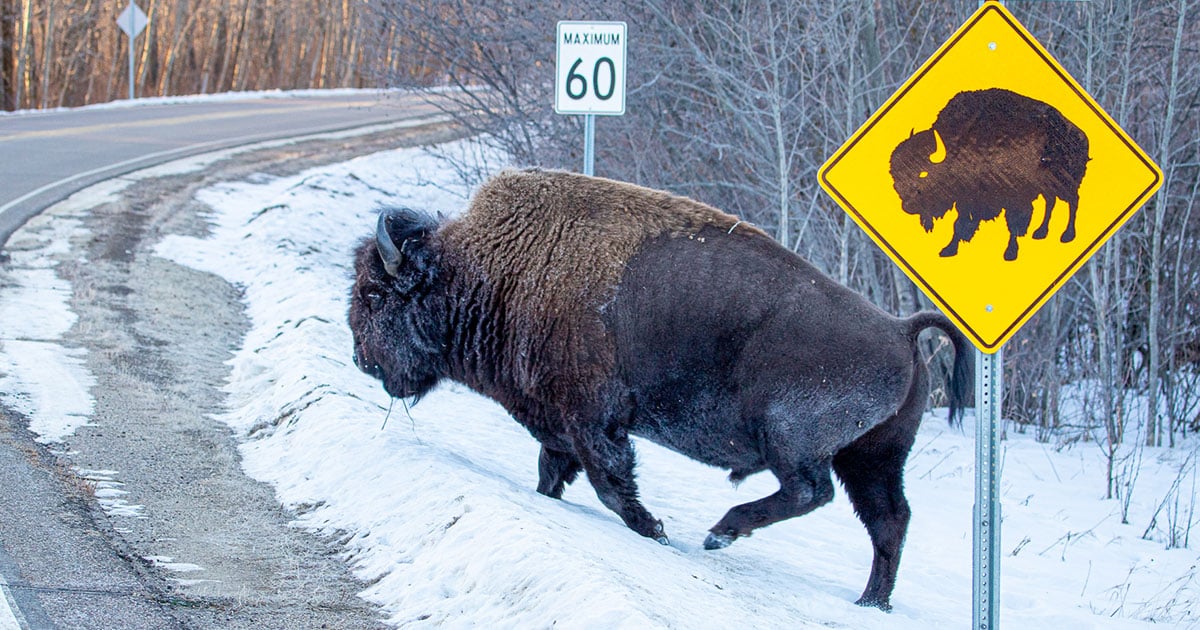 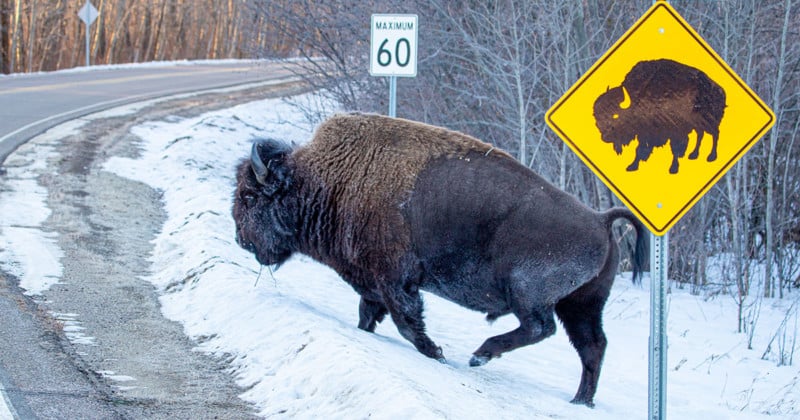 A Canadian photographer has captured a funny photo of a bison seeming to use a crosswalk especially designed for their safety.

Tim Osborne, a wildlife photographer out of St. Albert, decided to take a drive out to Elk Island National Park, near Edmonton, described online as “an important refuge for bison, elk, and more than 250 bird species.”

“I got there early to take advantage of the sunrise,” Osborne tells PetaPixel. “It was a pretty quiet morning in the park, but I was able to find a pair of bison just off the side of the road.

“After grabbing a few photos, the one bison made a move towards the road, and I immediately saw the opportunity to capture it with the bison crossing sign in the frame.

“My settings weren’t exactly what I would have chosen as they’d been set for the shots I was taking when the bison was sitting still in the grass, but I’m glad I was still able to capture the scene. With all of the challenges that people have been going through lately, it was nice to be able to share this shot to bring a few laughs.”

Osborne, who has only started making money from his photography over the past couple of years, said he usually tries to exclude roads and signs from his wildlife images, but the connection was too funny to pass up. He chuckled at his luck and got the photo quickly as the crossing did not last long. He had kept his fingers warm enough that he was able to get a quick couple of shots.

Osborne is thankful for “getting out into nature and taking photos [which] is such a wonderful escape from the challenges we are all dealing with these days.”

“Nice to see that Parks Canada staff have successfully trained the bison to use their marked crossings!” Tim Osborne joked in a tweet posted Sunday.

Nice to see that the @ParksCanada staff have successfully trained the bison to use their marked crossings! #wildlife #alberta pic.twitter.com/diZd0Y6x8S

The post stirred feelings of patriotism for some and attracted puns from others.

When Osborne saw the bison cross the road at the sign, he “couldn’t help but think of the famous clip from a few years back of the woman calling into a radio station asking for the deer crossing sign to be moved.”

Please watch, you won’t have more fun with your four minutes!

Osborne notes that he is mindful of safety as a wildlife photographer.

“I have a long telephoto lens; I certainly don’t mess around when it comes to something like the bison,” he says. “They seem pretty tame, but I wouldn’t want to get on their bad side.”

The safe distance for photographing bison is 25 yards. For those not willing to take an experienced wildlife photographer’s advice, something like this could happen to you, as PetaPixel has documented time and time again.