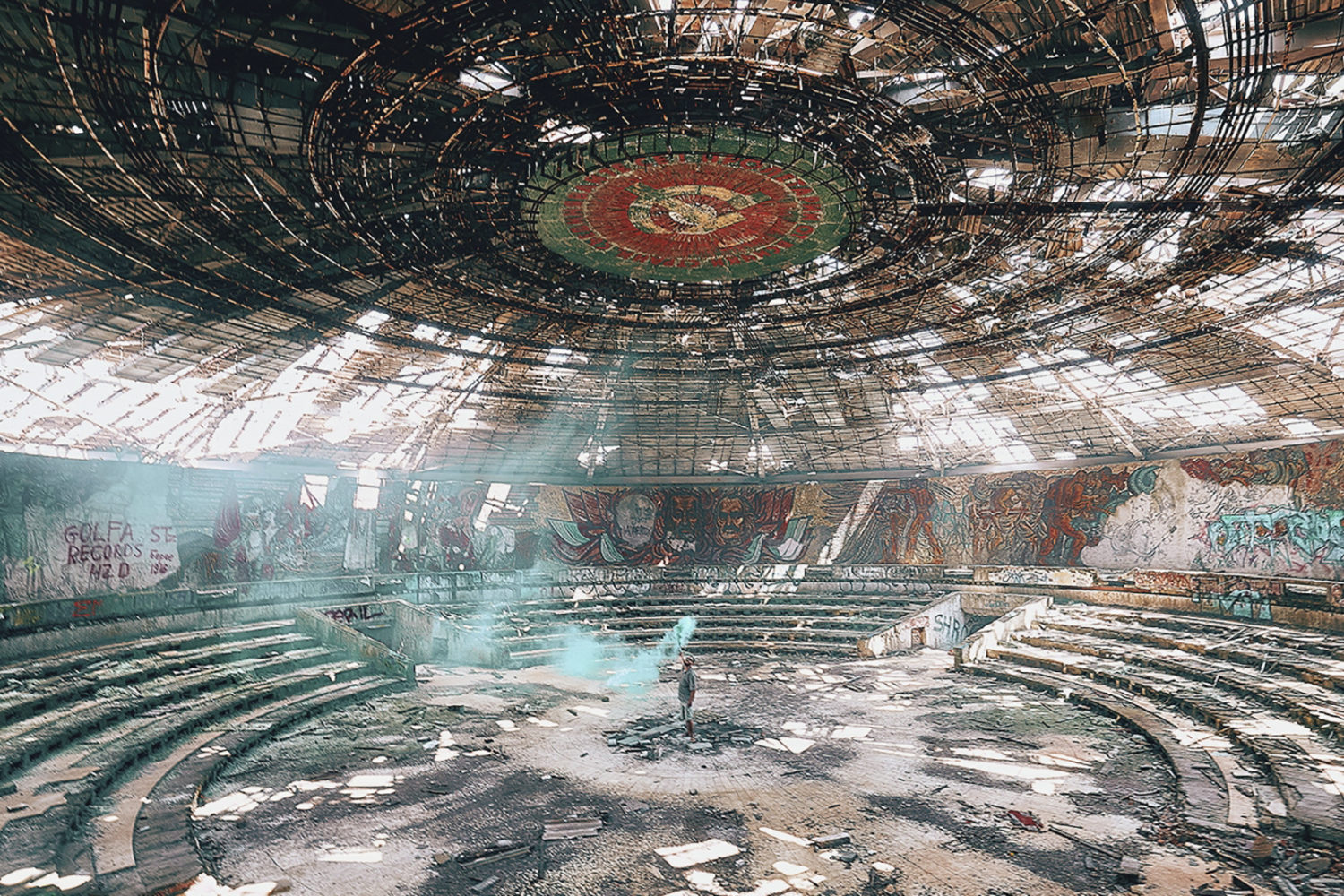 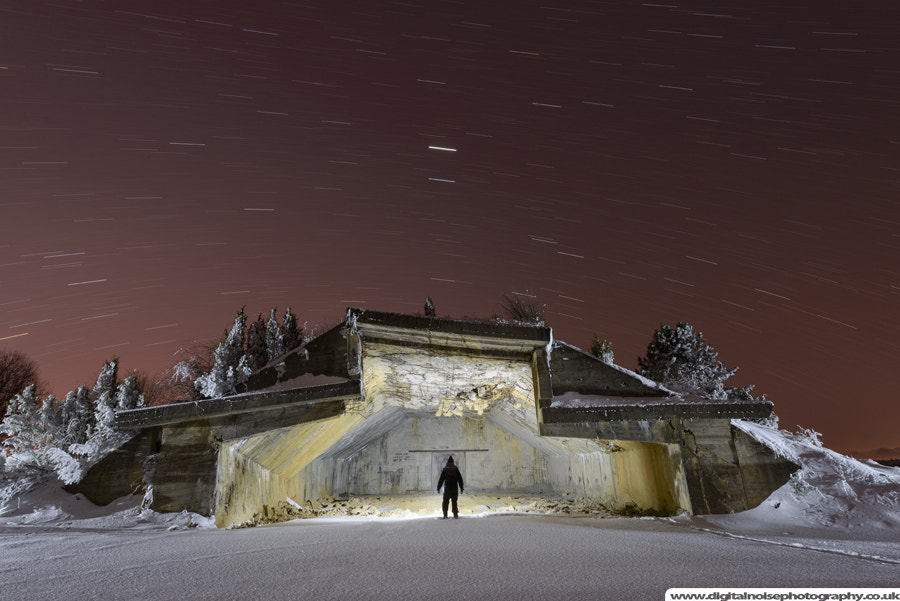 One January night, Mark O’Neill braved -20°C temperatures in search of forgotten places hidden within a frigid, silent landscape in Serbia. Above the mountain plateau was a crystal clear sky. He discovered this airbase (pictured above) by chance, and much of it had been destroyed in the Kosovo War, during the 1999 NATO bombing of Yugoslavia.

It was cold enough to freeze his beard, but he continued on. “We managed to reach the hardened aircraft shelters before we found the red tape warning us of all the land mines,” Mark says. In the end, he brought home this long exposure of that unforgettable night beneath the stars.

These are the moments that drive urban explorers to the ends of the earth, into abandoned buildings and underground caverns, across rooftops and tunnels. Urban exploration, or “urbex” for short, has exploded in popularity in recent years, with everyone from archaeologists and historians to photographers setting out to find manmade, architectural ruins in cities around the globe.

Urbex photography comprises several subgenres, including those who document abandoned buildings (houses, hospitals, schools), mines, power plants, amusement parks, and more. What unites them all is a shared passion for the overlooked and untold, buried just beneath the surface of our cities. Read on for our guide to getting started, and find inspiration in some incredible photos from the 500px community. Lukas Rodriguez photographs the Lake Dolores Waterpark, an abandoned water park in the Mojave Desert. First opened in the early 1960s, it’s been abandoned more than once throughout the decades, though it could be transformed into a roadside playground in the coming years. For that reason, this picture of its graffiti-adorned ruins serves as a valuable time capsule of a place on the brink of transformation.

Of course, urbex poses risks, sometimes serious ones, and your safety is more important than any photo. It’s a dangerous genre, so exercise caution. Travel with a friend or colleague, and when you go, tell someone where you are going and when they can expect your return.

Ask other explorers and photographers who have visited that spot before you for their advice, and in the beginning, shadow a professional to learn the ropes. There are active, vibrant communities of urbex photographers all over the world; don’t go it alone.

Here’s where research becomes invaluable; do some digging about the temperature, air quality, and hazards of your location. Different places will require different gear and precautions; take a few weeks or days to plan out every detail. Prepare yourself for any surprises or concerns that might come up when you’re on the scene.

Abandoned buildings, for instance, are often unstable. Mines and tunnels might have contaminants or fungi and oxygen can run low deep underground. Many areas will require helmets, along with a headlamp and other gear, like a mask or respirator. Places with asbestos or bird droppings can permanently damage your lungs. Avoid going out in the rain, as fragile structures often become even more dangerous when wet. 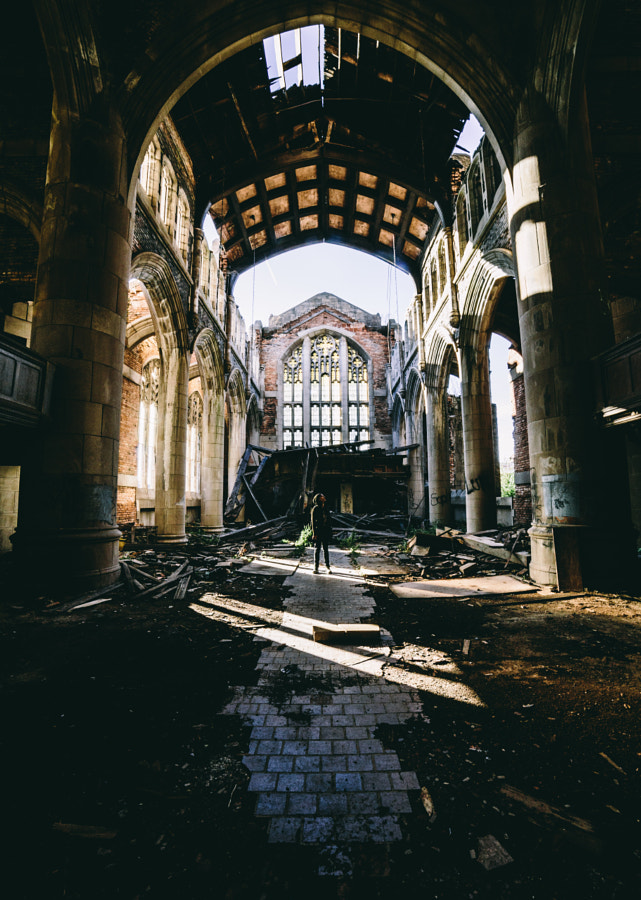 Kaleb Jordan photographs the abandoned City Methodist Church in Gary, Indiana, a massive Gothic Revival landmark left behind following the decline of the steel industry. In 2019, the church was given a historic marker; plans to transform it into a ruin garden are underway. 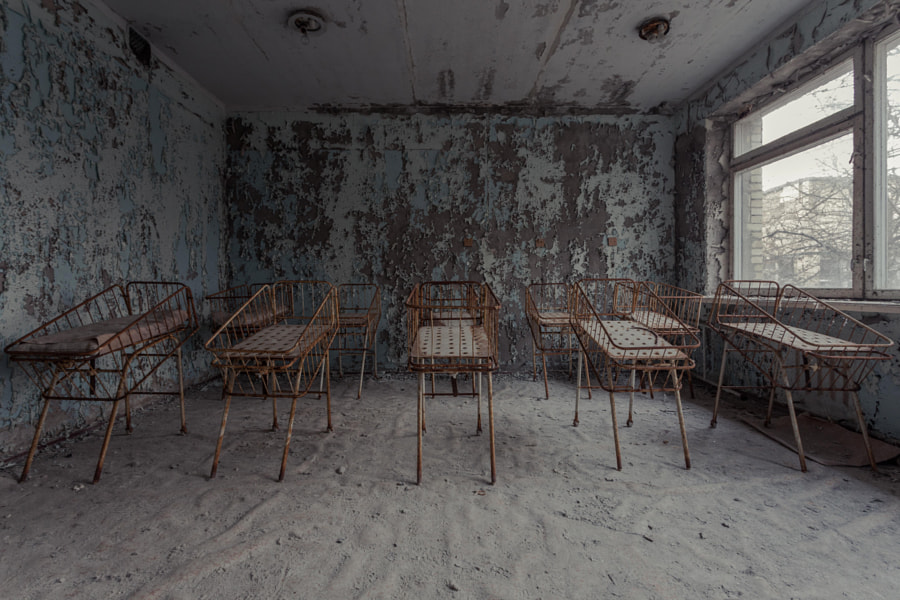 Iain Bolton photographs the ghosts of Pripyat Hospital in the Chernobyl exclusion zone; before the disaster, Pripyat was home to 50,000 people, schools, shops, cultural centers, and more. Before the evacuation, the hospital treated people ill with radiation sickness. 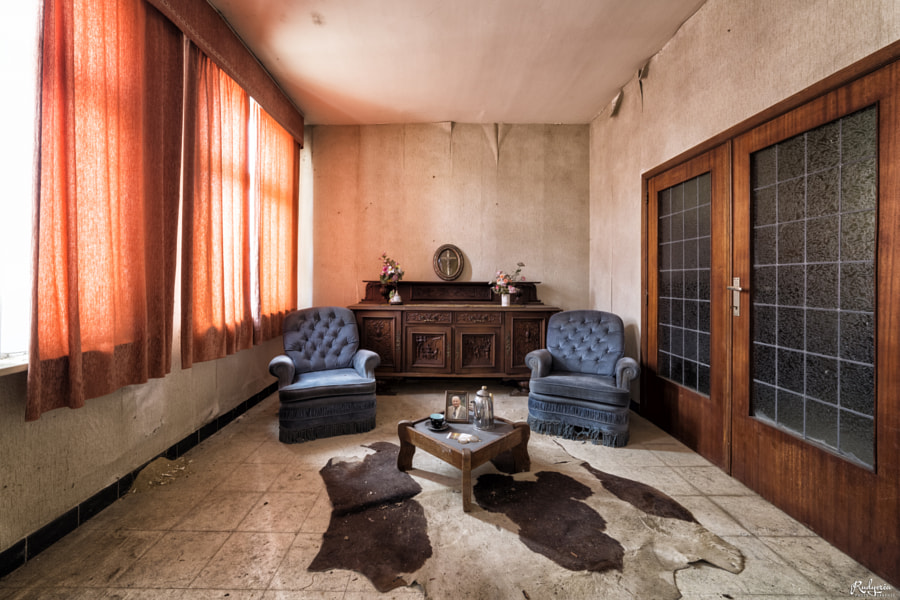 Some urban exploration is legal, and some is not. Before you go, research the location in-depth and see if you can request permission from the owner to enter; it’s not only good practice, but you also might learn more about the structure and its history in the process. Look for legal options and avenues.

Breaking and entering is a no-go in the urbex community, though many choose to enter through open doors or fences. The first rule of urban exploration is doing no harm; don’t steal anything, vandalize the property, or leave anything behind once you leave. If you’re ever approached by security, be honest and explain why you’re there and what you’re doing. 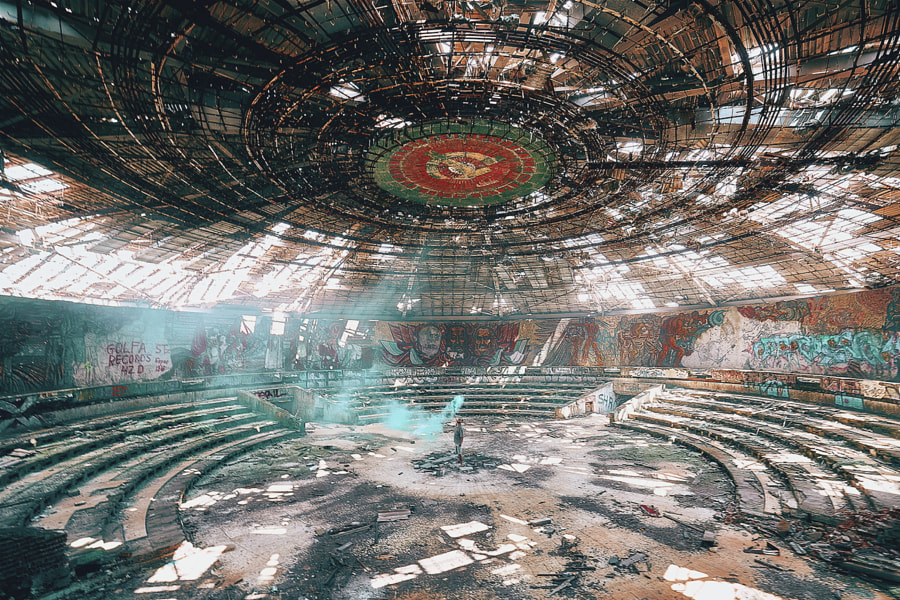 Talented urbex photographer Yuto Yamada finds his way into the Buzludzha Monument in the mountains of Kazanlak, Bulgaria, also known as “the UFO,” where urban explorers have made regular pilgrimages since the 1990s. It hasn’t been open to the public since the fall of the Soviet Union; the main entrance has been sealed ever since. Now, it’s under 24-hour guard to prevent people from venturing inside.

As we mentioned, your gear will vary based on your location, but in almost all situations, you’ll need the best boots you can find and a torch or headlamp. You might also need a tripod for your camera in low light conditions, a lens cloth for moisture, and protective clothing appropriate for the conditions you plan to face. You might want to leave your most expensive gear at home if there’s a risk of damaging it. Some urbex photographers never head out without a wide-angle lens, either, especially if they’re headed for narrow or tight spaces; bring a few options. The photographer and urban explorer Stefan Baumann reveals the interior of a disused theater in Austria, currently under renovation.

Online, you can find tons of faraway places worthy of discovery, but chances are, there are hidden gems sitting undiscovered in your own backyard. Starting in your city can help for a few reasons; first, you have access to the library and historical society archives, so you can dig deep to find interesting spots.

Second, you can form a group with other local photographers and explorers, who can help you discover new places. Your neighbors will be another resource, especially ones who have lived there for decades; ask around to see if they remember anything about the city before you got there.

You can also connect with local historians and preservations. Finally, browse Google Earth or Street View for locations close to home; you might be surprised at what you find, especially if you live close to a former industrial area. 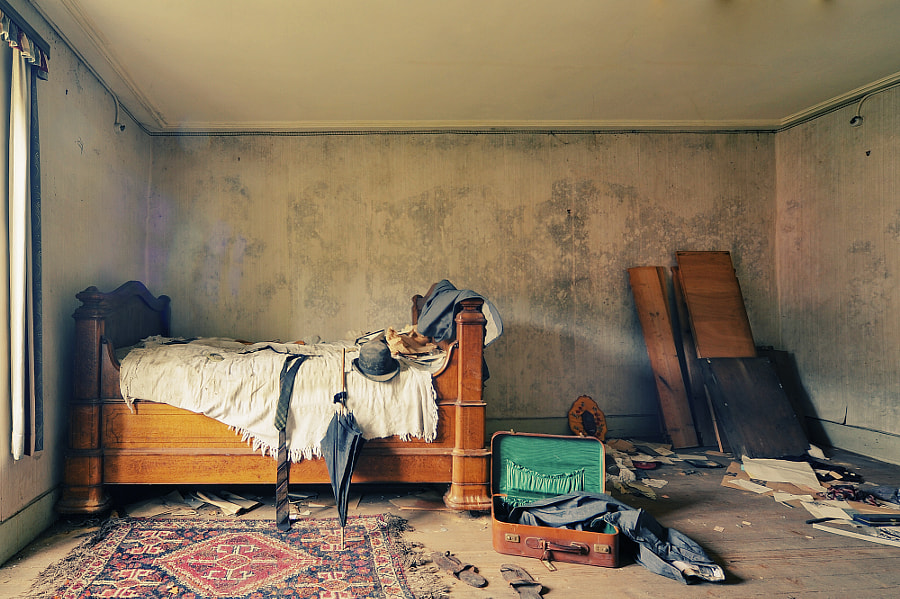 “What happened here?” the photographer Daniel Schmitt asks while visiting Maison Kirsch, a farmhouse in Luxembourg, believed to have been abandoned by its owners in the 1960s. Dating back to the 18th century, it used to be a brandy distillery, hence the name “Kirsch Leon Beu uncovers a domestic memory in a forgotten kitchen in Albania.

One thing you’ll notice about the urbex community is that they don’t give away their locations willy nilly, and with good reason. These spots can quickly become popular and overcrowded with explorers and tourists, and that has serious consequences for both the integrity of the location and public safety. Inexperienced explorers are more prone to accidents, and not everyone follows the “leave no trace” principle. If you share your location, do it only with people you trust.

Luckily, once urbex photographers see you’re serious and conscientious, many will be willing to let you in on some of their secrets. It can help to join a forum or social media group dedicated to the craft, but remember to be considerate and follow the rules. If someone doesn’t want to share a location with you, respect that and move on. 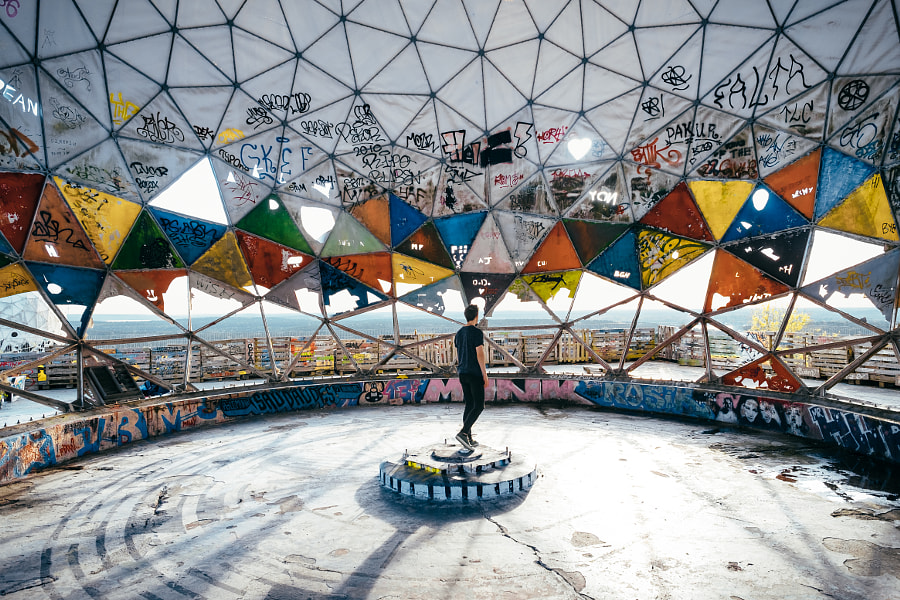 Teufelsberg in Berlin, photographed here by Simon Alexander, is a former listening post and NSA spy station, abandoned following the fall of the Berlin Wall. “I love this place so much,” Alexander writes. “Next time, I’ll catch golden hour.” Today, the full story of Teufelsberg’s history remains unknown; reports from the station during the Cold War will be classified until 2022.

Interested in photographing life in your city, including the people who populate its streets? Read our complete guide to street photography next.

Photographing Atlantic Puffins on the Island of Runde
Light Painting: A Complete Guide
A Complete Guide to Leica M Lenses
Adobe May Be Using Your Photos to Train its AI
Apple Wants its Pencil to Be Able to Sample Color From Real World Surfaces