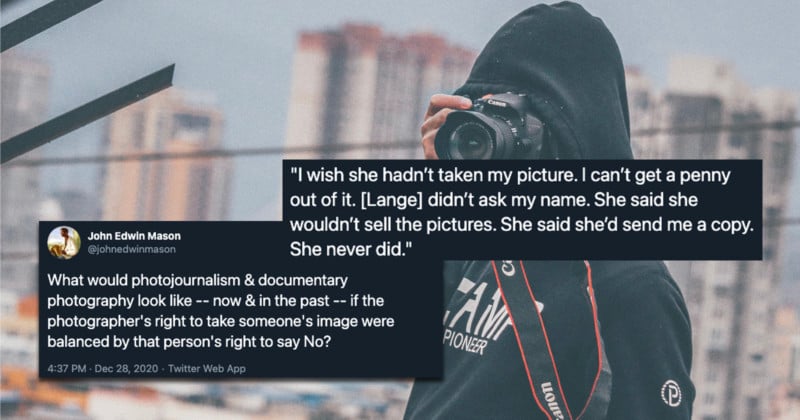 A University of Virginia history teacher published a tweet asking what photojournalism and documentary photography would look like, now and in the past, if the photographer’s right to take someone’s image were balanced by that person’s right to say no.

In October of 2020, the New York Post published a controversial OpEd calling street photography a form of “gender-based violence” (and this piece argued against that perspective). A recent Twitter debate continues to question the norms of documentary photography against the right to refuse having a photo taken.

What would photojournalism & documentary photography look like — now & in the past — if the photographer’s right to take someone’s image were balanced by that person’s right to say No?

The aforementioned history teacher, John Edwin Mason, cites the story of Florence Thompson, the woman whose face would become the iconic image of the Great Depression, in his argument. Thompson is reported to have resented her photo being taken and dislikes its eventual spread.

“I wish she hadn’t taken my picture. I can’t get a penny out of it. [Lange] didn’t ask my name. She said she wouldn’t sell the pictures. She said she’d send me a copy. She never did.” https://t.co/7djZTLJvdD

The basis of this argument is a discussion of power and agency, and who has it. For Thompson, it is argued she was not in a position to deny “a well-dressed government lady” with a camera. The same could be said of others, even if the photo that was being captured was taken with good intentions.

The first thought that came to me is “Migrant Mother” by Dorothea Lange. Lange described it as sort of a silent kind of consent from the subject, which I dunno if that would fly these days. Lange’s job at the time was to bring awareness to poor farmers in the Depression.

Very true. That was the only thing I could think of, yet it was still a huge imbalance of power.

It’s complicated. He was a reformer, not a revolutionary. Many of his photos were exploitative. All were aimed at middle- & upper-class audiences in the pursuit of reforms that would preserve the status quo. None were about structural change or empowering the poor.

Photographers thinking they have a right to take a photo is why research into the sex worker as image maker needs to exist because photographers need to be held accountable for the role they play in the weaponisation of photography against marginalised peoples. https://t.co/xAYdyotGUR

On the other side of the debate, many argue that were this world that Mason suggests a reality, we would lack images that have since been used to frame major events.

Then we would probably not had Jacob Rijs or Lewis Hine, Minamata or much that we remember out of Vietnam. In fact, we would have little sense of what Apartheid was like or … but we would have even more kittens.

You are essentially pitting privacy against the first amendment, which would only benefit the powerful. The dignity recovered would be lost in the resulting cover-up of societal issues. What about surveillance? There millions of security cams silently recording 24/7. What then?

Some have argued that all we would have are commissioned images which paint a false picture of how the world really was.

I love portraits like this. And, in fact, they tell us a lot about the history of the times, as Paul Weinberg, David Goldblatt, & others so ably argued in The Other Camera (exhibition & catalog). But I think you’re quite wrong that commissioned images would be all that we have.

This particular thread eloquently argues for documentary photography as we know it, but through the context of understanding other conflicting opinions:

1- This is going to be a long one, apologies.
I believe that when speaking about photography and consent, it is not possible to put in place general rules that apply to every possible situation, and therefore it is necessary to consider power relations, privilege and context.

The debate of who has the right to be photographed and who has the agency in the situation will no doubt continue to be argued one way or the other. Street photography, photojournalism, and documentary photography along with the most successful photographers who shot in these genres are generally revered in the photographic community. To question the ethics of their craft can elicit strong reactions from those who hold them in such high regard. Nevertheless, it is important to consider the ramifications of photography both as an art and as a practice. What a person with a camera does and what they plan to do with the result is often not clear to those that are the subject of candid photography. It’s no wonder this makes so many uncomfortable and why there are such strong opinions on the matter.

What are your thoughts on the continued debate? Let us know in the comments.