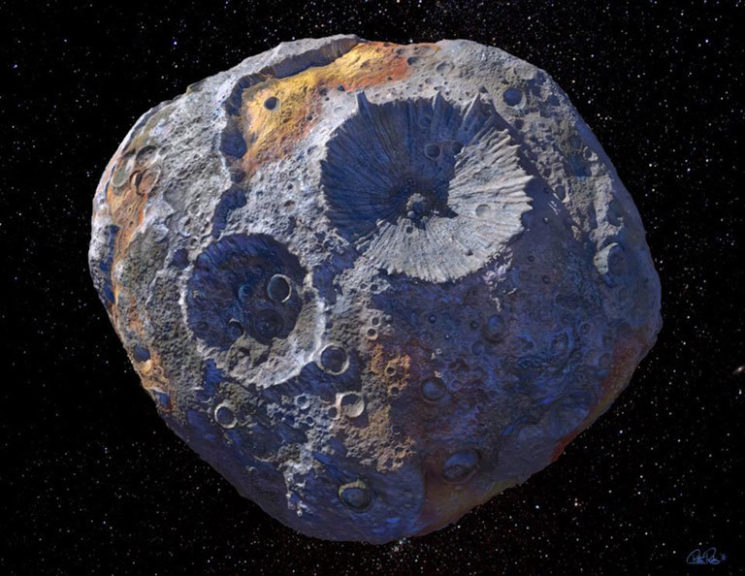 Hubble has taken quite a lot of stunning images over its three-decade-long existence. And recently, it took managed to capture a photo of the asteroid 16 Psyche in the most detailed image so far. What’s special about it? Well, one of the things that make it special is that it contains iron and nickel worth around $10,000 quadrillion. For comparison, that’s 70,000 times the global economy.

16 Psyche was discovered a long time ago: Italian astronomer Annibale de Gasparis first spotted it on 17 March 1852. It hasn’t been explored from up close so far, but NASA plans to send a spacecraft to explore it in 2022. According to NASA, its size is 173 miles (279km) by 144 miles (232,) by 117 (189) miles. It’s one of the most massive objects in the main asteroid belt orbiting between Mars and Jupiter.

Southwest Research Institute planetary scientist Dr. Tracy Becker recently discussed the first ultraviolet observations of 16 Psyche. This asteroid could be interesting for astronomers for a variety of reasons. First, it’s made almost entirely from metal instead of rock and ice. “We’ve seen meteorites that are mostly metal, but Psyche could be unique in that it might be an asteroid that is totally made of iron and nickel,” said Dr. Becker.

According to Robb Report, the asteroid’s worth is $10,000,000,000,000,000,000. That’s a lot of zeros, right? If NASA miraculously managed to bring the asteroid back, sell it, and split the earnings between all people on Earth, each of 7.5 million us would get approximately $1.3 billion. I must admit that this made little dollar signs appear in my eyes, but of course, we can only fantasize.

Other than the “cost” of this huge mass of iron and nickel, they indicate that the 16 Psyche could be the leftover core of a planet. “Earth has a metal core, a mantle and crust,” Dr. Becker explained. “It’s possible that as a Psyche protoplanet was forming, it was struck by another object in our solar system and lost its mantle and crust.”

In August 2022, NASA plans to send a spacecraft to examine the asteroid further. If everything goes as planned, the Psyche spacecraft should arrive at the asteroid in early 2026 and spend 21 months in orbit. During this time, the spacecraft is planned to map and study 16 Psyche’s properties and determine whether it’s indeed the core of a planet. If it is, it could perhaps give us more insight into the core of our own home planet, too.

Adobe May Be Using Your Photos to Train its AI
The Paul C. Buff Celestial is a 500Ws, TTL/HSS Compatible Battery Strobe
Camouflaged Cameraman at Hockey Championships is a Crowd Favorite
Cut Out Transparent Objects in Photoshop
The Leica Cine 1 is the Company’s First-Ever Home Entertainment System