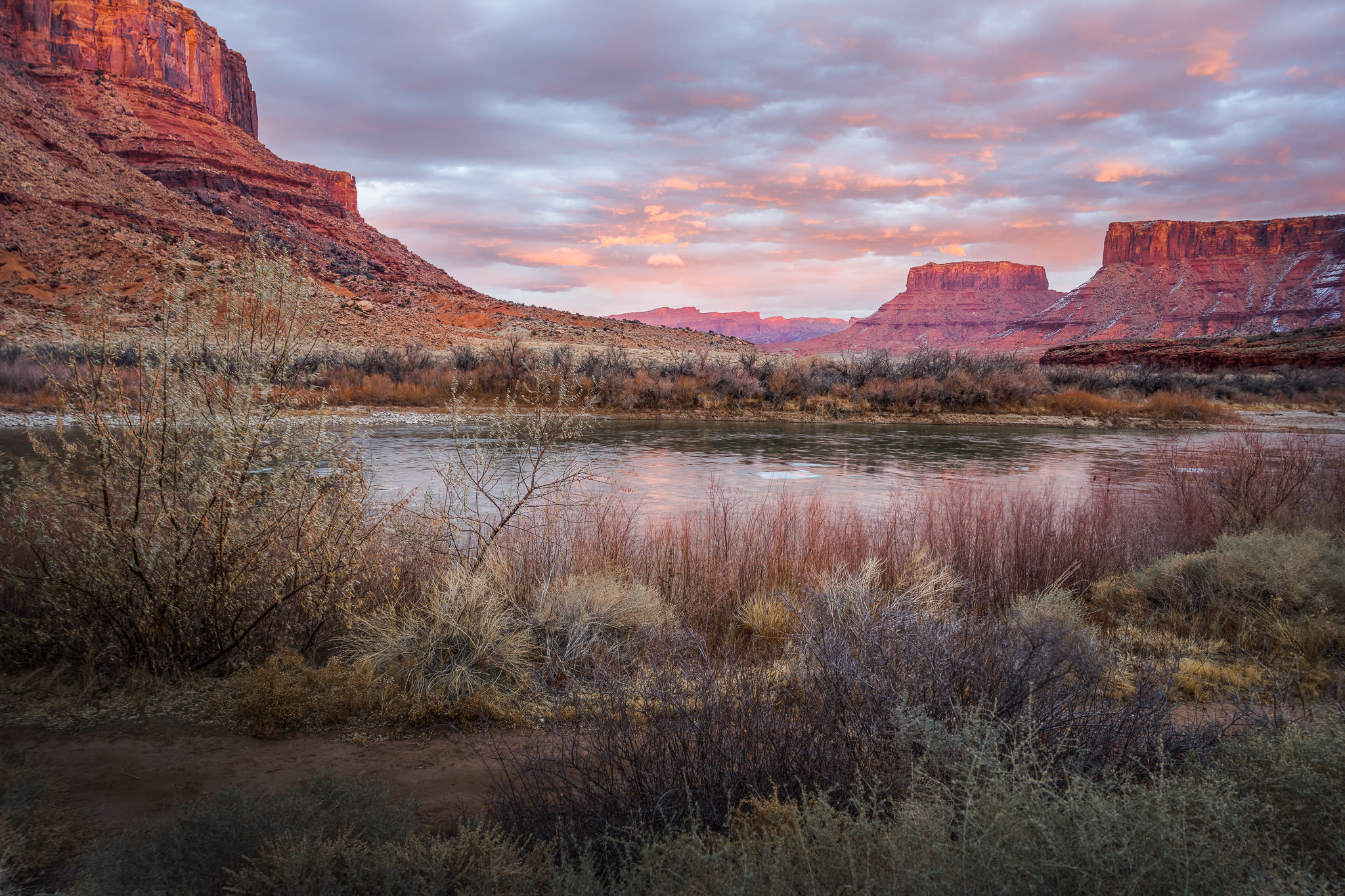 Have you been to Utah yet? If not, why not? It is, after-all, the most beautiful state…

I had no idea what to expect but I fell in love with Utah from the moment I first set foot there. It’s different. The people are very nice, friendly and polite. The towns are beautiful. And the landscape is unlike anything I’ve seen anywhere else.

Consider the Mesa Arch in Canyonlands for a second. If it’s your first time and you arrive before sunrise, you have no idea what’s in front of you. And then the first light hits and boom, this jaw-dropping scene reveals itself.

Take a few (very, very) careful steps towards the edge of the base of the Mesa Arch and have your mind blown:

But let’s rewind for a second and start with Zion, considered Utah’s (and perhaps the country’s) top national park. The pale blue Virgin River carving its way through the towering red cliffs of the canyon provides one stunning vista after another.

In the absence of the tourist crush – off-season, early morning – it is hard to imagine a more peaceful place: the canyon cradles you and soothes you with the hushed trickle of the river that occasionally turns into the gush of the rapids.

I don’t know whether it’s because nature has healed or there are fewer visitors but I see a lot more wildlife – deer, elk, etc – in the national parks now. In Zion, it was sunrise and I was pretty much by myself and I had quite a few deer encounters.

I mean, just when you think it can’t get any better, you get a surprise like this…

Rise early enough and you’ll be rewarded with a stunning display where the soft light of the rising sun bathes the canyon summits in a deep orange hue that is perfectly complemented by the natural colors of the landscape.

2000+ feet of rock vertically rising to the sky in all directions and glistening in the light of the full moon. Frankly, it’s a moving, humbling experience. (The wide-angle capture does not do justice to the scale of this scene.)

I found some beautiful bluebirds nesting by the bank of the Colorado River in eastern Utah:

Speaking of the Colorado River…

Back to Canyonlands: The view from Dead Horse Point, particularly at sunset, is one of my favorites. The magenta hue and the glow in the image below are from the setting sun. There is a point to the south of here (not shown) where the Colorado river does a full u-turn.

La Sal Mountains, as seen from Dead Horse Point (I really love this place, the views are amazing and the combo of sunset and snow takes things to another level):

There’s an endless buffet of photo ops in Canyonlands, in general.

Don’t even get me started about the insane arches around Moab:

Finally, right at the border with Arizona, in Navajo Nation land, is the familiar and weird but striking landscape of Monument Valley. I say “familiar” because so many movies and TV shows have been filmed here.

The 17-mile loop was closed due to the pandemic but I was still able to pull off some interesting shots from a distance.

If you’re ever in the area, don’t skip Goose Neck State Park, where the Colorado river does some truly head-spinning twists and turns:

I still can’t believe I was able to capture this next shot. We were on the open road at dusk when my wife noticed a silhouette in the distance. I mounted my zoom lens and fired away as soon as we realized what it was and caught the magnificent creature just when it looked up:

Bonus shot: Horses grazing on an Indian reservation on the outskirts of Phoenix, Arizona:

When you’re driving on the 70 freeway, pretty anywhere you can pull over, you’re greeted with a stunning view. Here’re a few scenes I captured along various viewpoints:

I can go and on — everywhere you look in Utah, you see a photo. But I’ll end for now with this capture of Zion’s star attraction, the magnificent “Watchman”:

‘Lunchbox’ Replaces Photographers as the First AI Image Generator for Food
Using the AstrHori 18mm f/8 Low-Cost Shift Lens
RODE Adds Optional Broadcast-Grade Mic to its Studio Headphones
🔥 Change Hairstyles and Swap Hair in Photoshop!
What is Butterfly Lighting and How to Use It for Portrait Photos