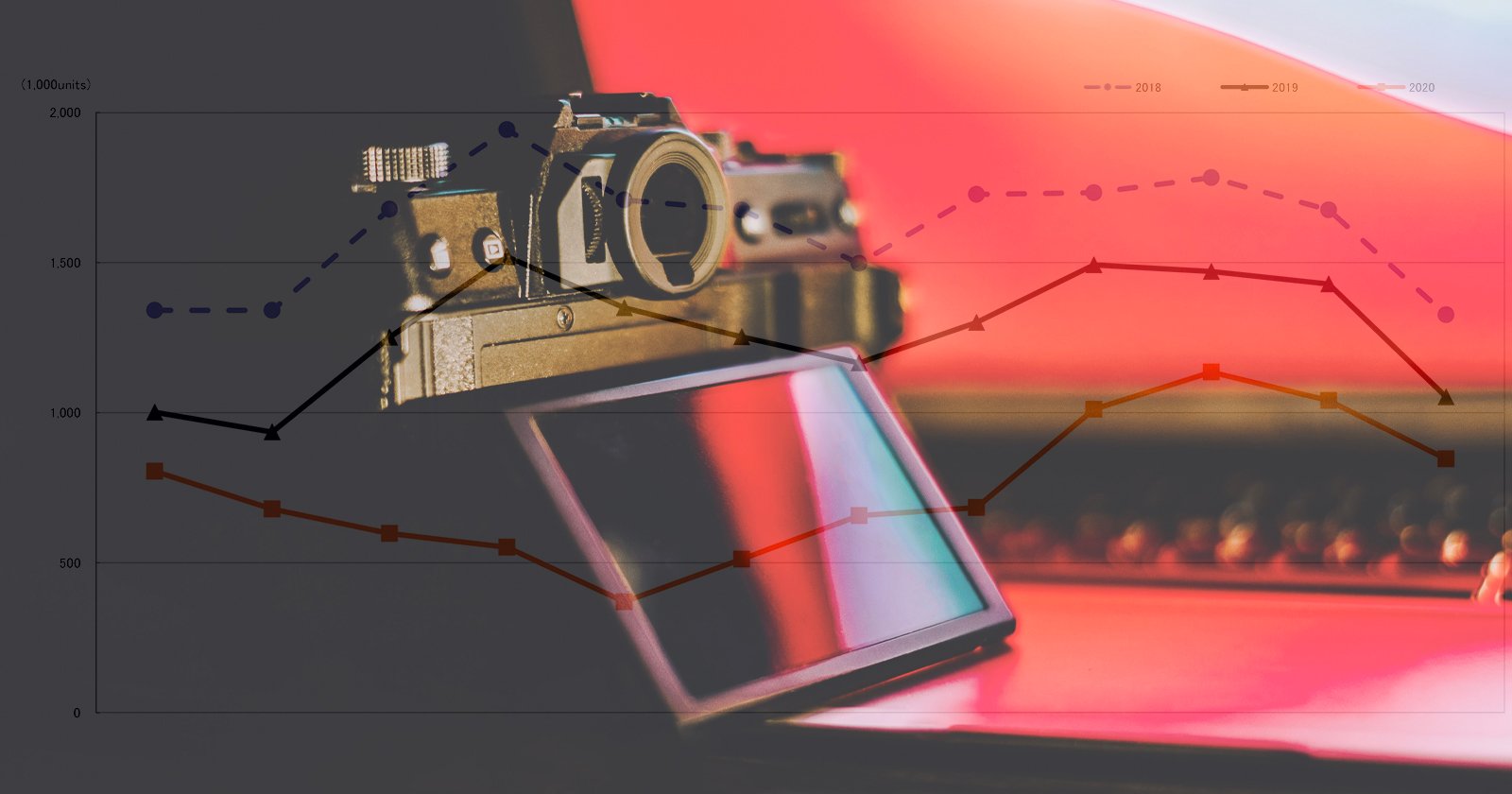 CIPA, the Camera and Imaging Products Association, has published its final report of camera sales and volume for 2020 and the numbers confirm what was expected: the annual downward trend of the market has continued, with 2020’s numbers further damaged by the COVID-19 pandemic. But it’s not all bad news.

The last 11 years in the camera industry have been rough for manufacturers, and 2020 did not let up. Year over year, the same trends have been visible in the market, but just with lower volume which shows a gradual decline of the camera market. CIPA compares sales shipments of all digital cameras, just interchangeable lens camera, and just fixed lens cameras as part of its report, and looking at the graphs side by side shows that, aside from the big dip from April to May that runs counter to how the market usually fares year over year, trends look largely the same.

Despite trends continuing as predicted, those trends are not a good sign for the health of the market. as it shows the camera industry is continuing a steady decline. 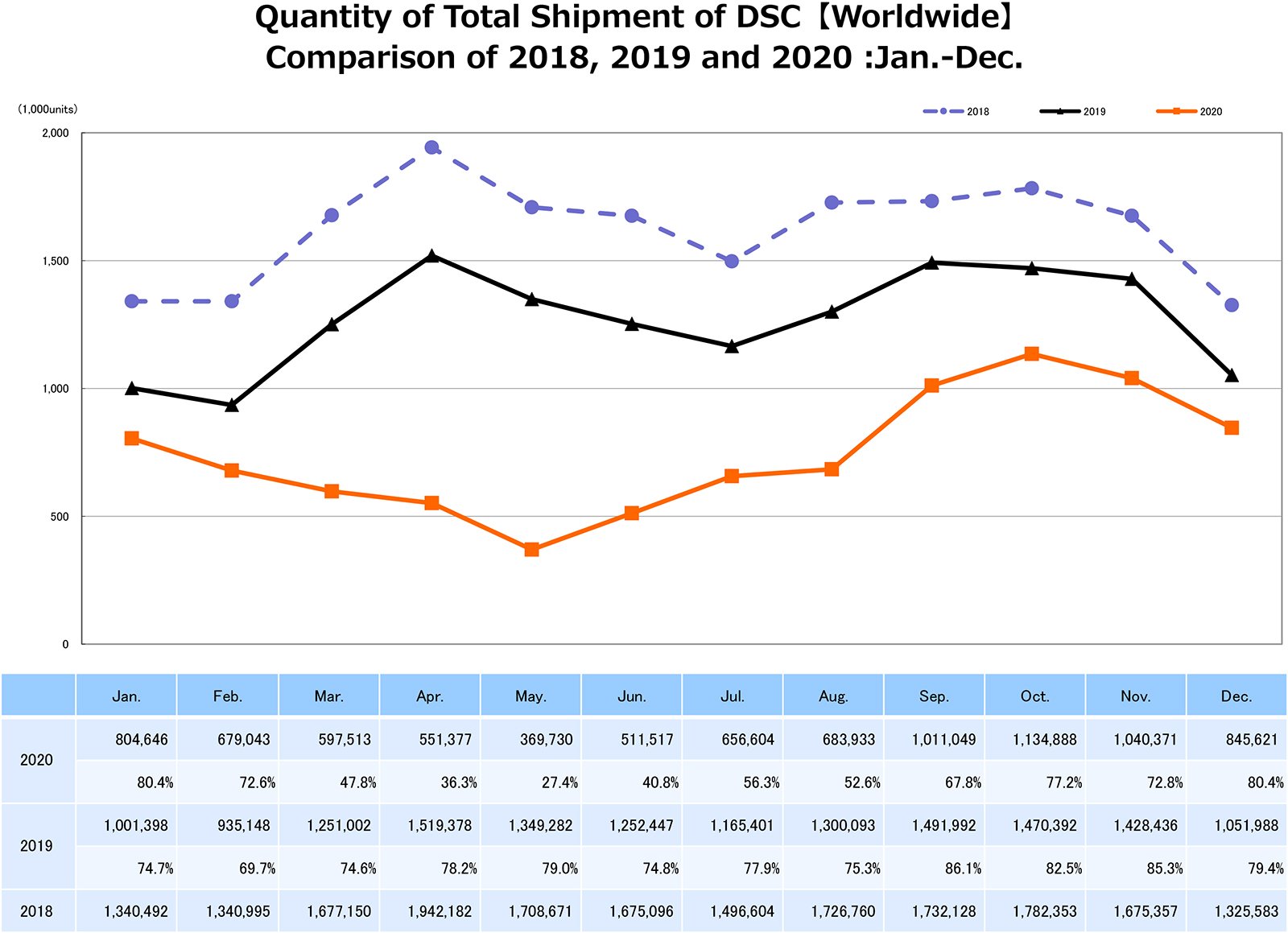 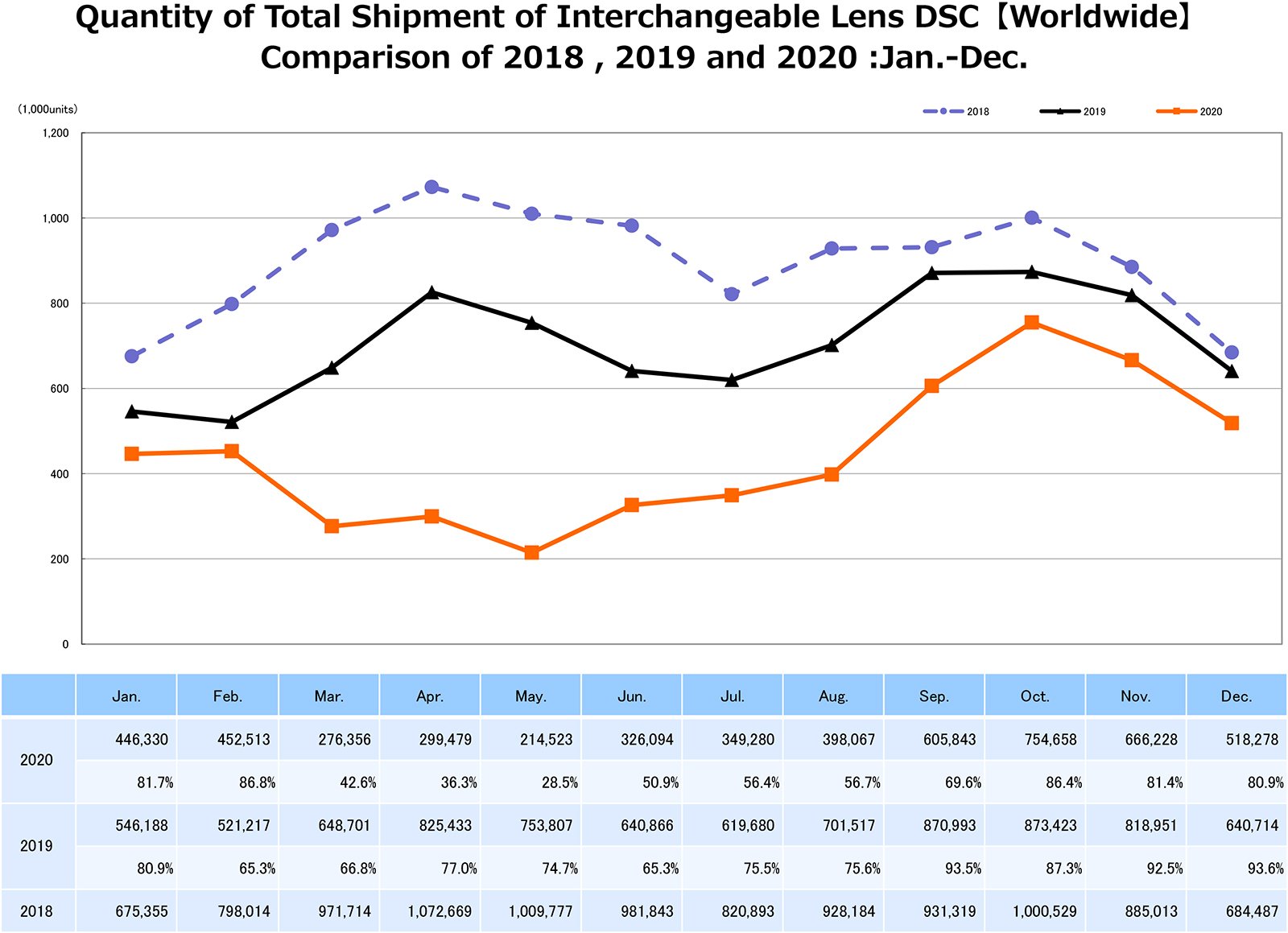 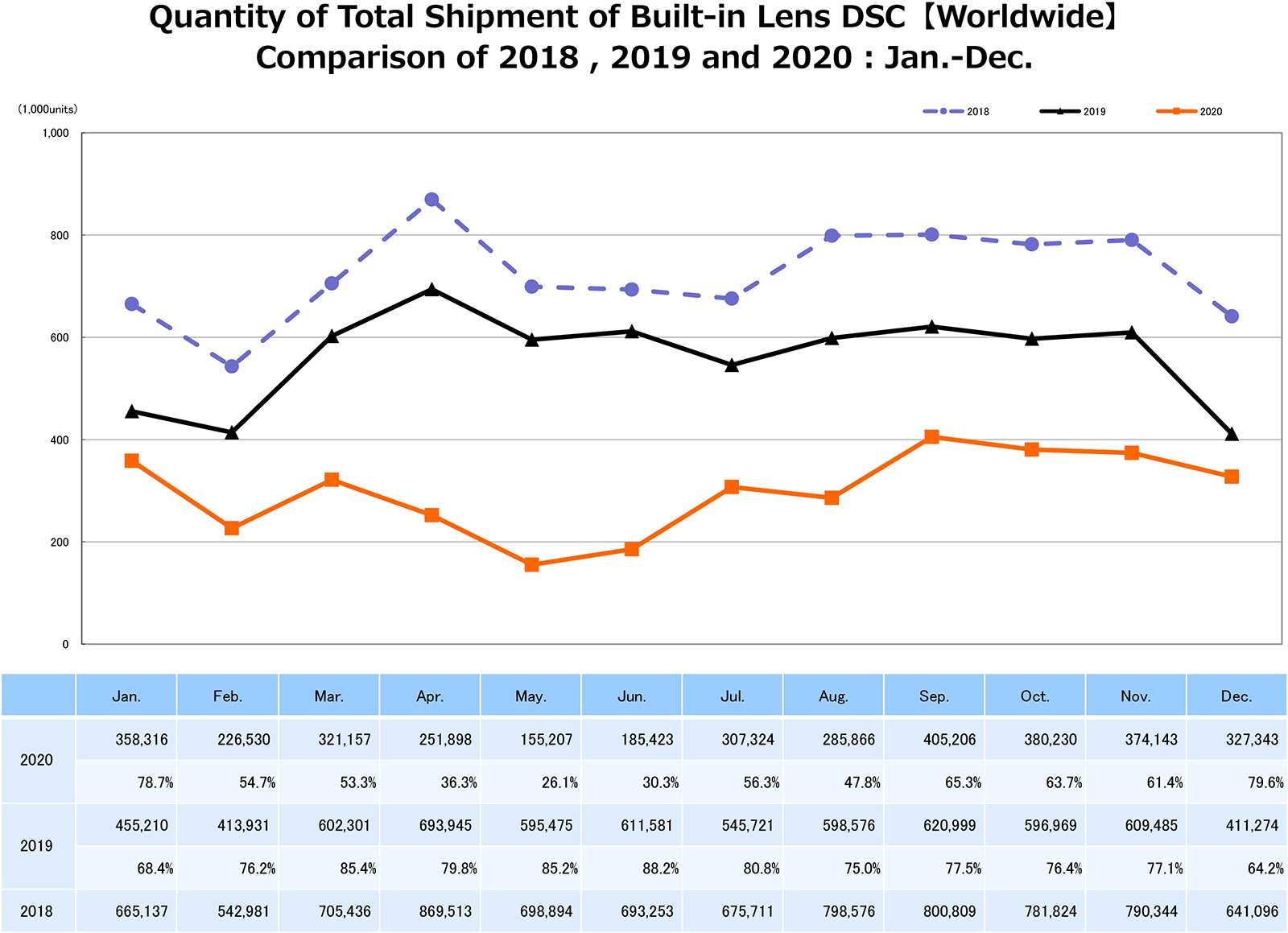 Last year, a bright spot was mirrorless, which saw a growth in the segment even as DSLRs and fixed-lens cameras continued to fall. And while sales across the board were down in 2020, that same bright spot remains. As reported in January, Canon revised its sales projections due to the unexpected success of its EOS R5 and R6 cameras in China. CIPA’s numbers show it wasn’t just Canon that saw a boost from the region: the whole mirrorless market benefitted from China’s interest. While volume only matched last year’s, the value of that volume increased to 113.4%. Europe and the Americas also saw rather healthy sales values (when you consider the market’s overall dip) of 90.7% and 87% of 2019.

What is most interesting about those numbers is that the volume of mirrorless units fell rather significantly in both regions. Europe saw 74.8% of sales volume in mirrorless compared to 2019, and the Americas 81.6%. So despite the notably lower sales volumes, sales values are still up. In all regions, a notably higher sales value over sales volume can be seen when it comes to mirrorless interchangeable lens cameras. 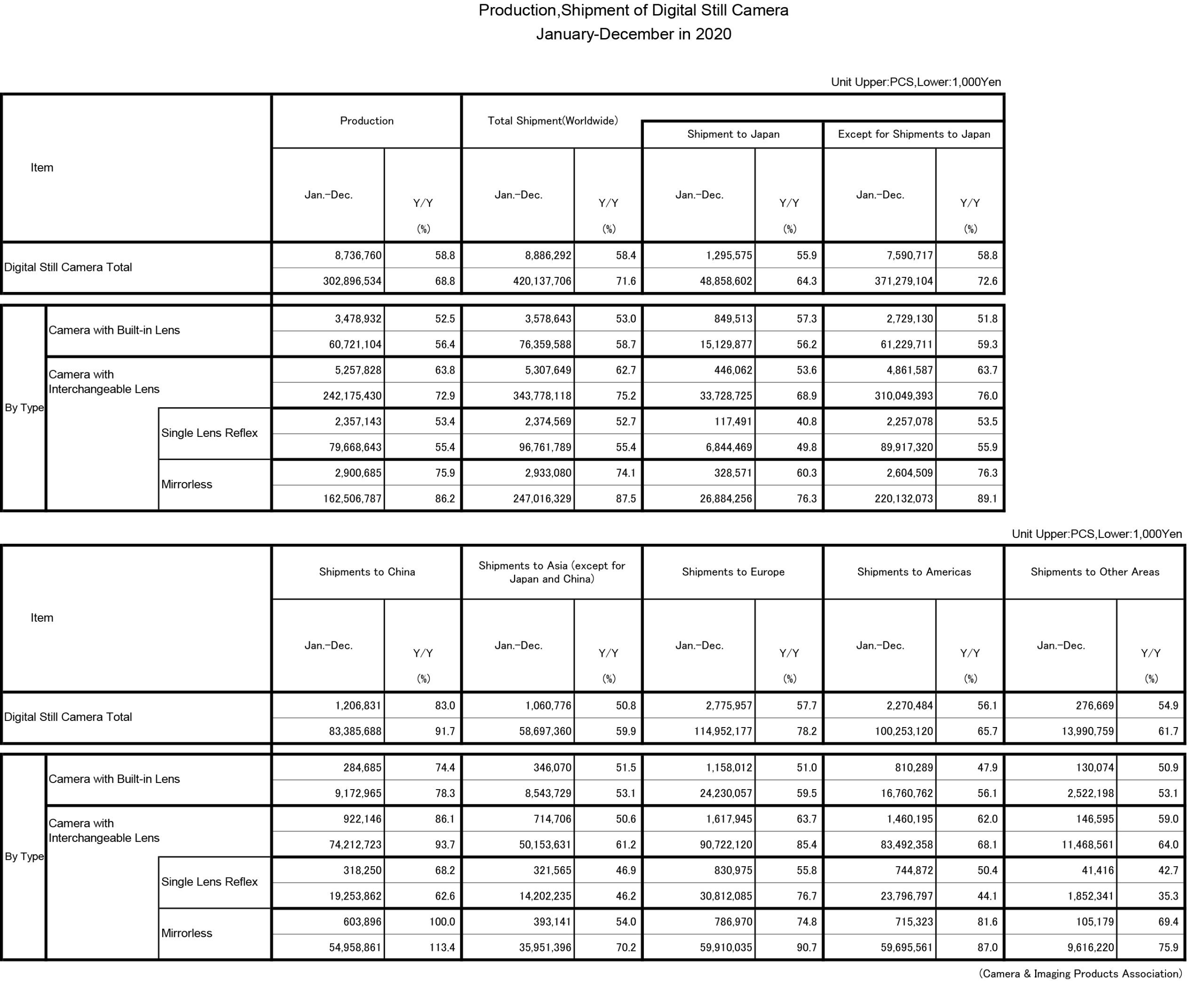 This is a trend with mirrorless: while consumers are buying fewer devices, the value of those devices exceeds those of previous years. What this may signal is that while the market is falling overall due to the success of smartphone photography, consumers interested in photography as a hobby are still willing to spend money if a product can show them significant value.

If this is true, companies that continue to show poor sales numbers and profits compared to their contemporaries aren’t providing that value to customers. The market is shrinking, and competition over a smaller total volume will put an emphasis on perceived bang for the buck.

DSLR and fixed-lens camera sales do not have nearly this same level of value compared to volume, which means that companies who do not invest in mirrorless interchangeable lens cameras are going to have a rougher go of it.

While that is one positive takeaway from the report, the rest of the numbers are admittedly not great. China is the only market that saw no drop in sales volume for the year, with every other region going in the other direction. Shipments to Asia look particularly grim, with only 54% of total sales volume compared to last year in mirrorless and 46.9% of volume in DSLRs.

Overall, fixed lens cameras were at 52.5% of volume and 56.4% of value, DSLRs were 53.4% of volume and 55.4% of value, and mirrorless was 75.9% of volume and 86.2% of value. Globally, 2020 was not a great year for camera manufacturers, though it is highly likely these numbers were influenced by the collapse of the spring and early summer sales numbers. If the world recovers from the pandemic as it appears to be doing (if trends from the second half of 2020 continue), we should see some very healthy 2021 numbers as we look back on the year in 2022.

Image credits: Background of header image by by Kenny Leys.

Canon Designs 300mm f/2.3 and 400mm f/5 Autofocus Mirror Lenses
Make Your Photos Look 3D with Dodge and Burn in Capture One 23
10 Best Cameras & Lenses of the Year: OP Editors’ Picks 2022
Sony Has Moved 90% of its Camera Production from China to Thailand
How to Achieve Compositional Balance in Photography