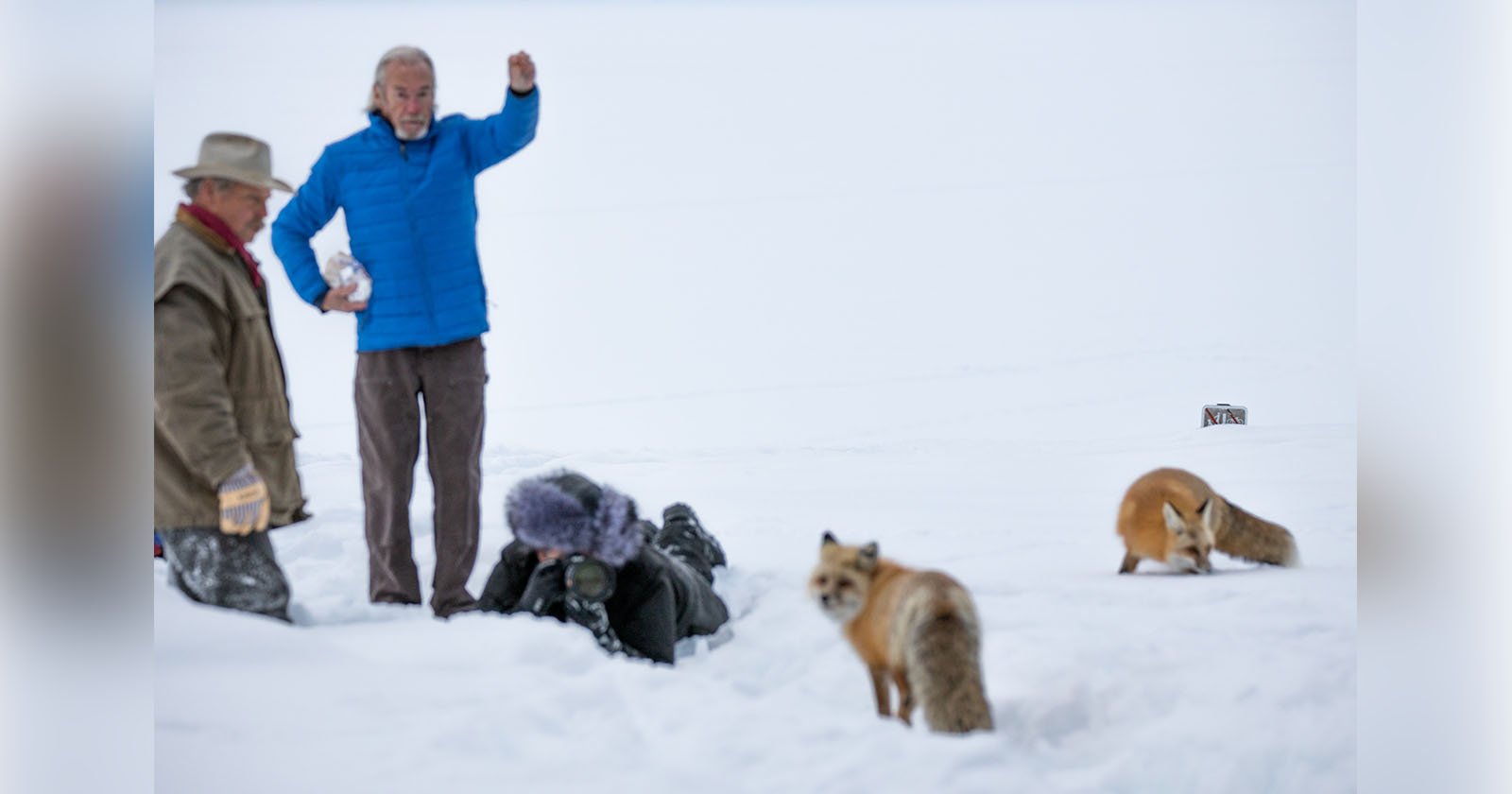 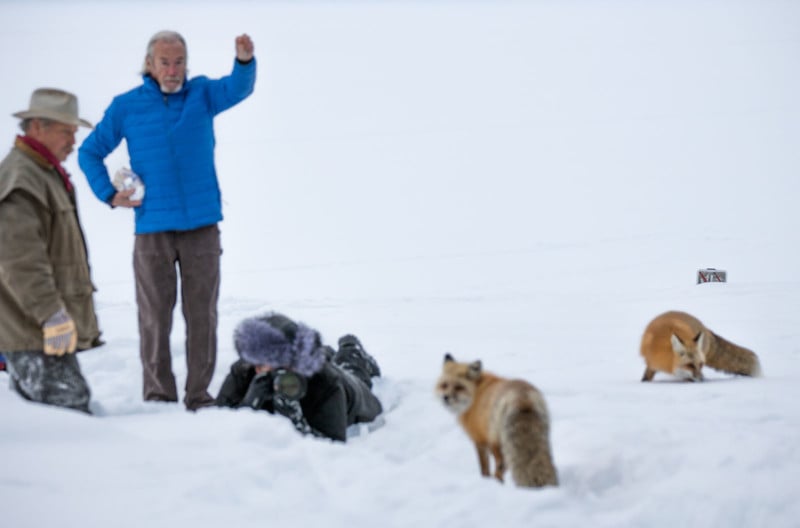 Renowned wildlife photographer David Yarrow has found himself at the center of a new controversy this month after another photographer levied claims that she witnessed his crew feeding and enticing wild foxes in a National Park while Yarrow photographed them.

Jackson, Wyoming-based photographer Tiffany Taxis says she was in Grand Teton National Park on January 26th photographing a fox when she became disturbed by the behavior of a group of men about 20 feet away.

“One man circled the area feeding the fox occasionally,” Taxis tells PetaPixel. “After this, the men started photographing two foxes. The photographer instructed one of the men to use the plastic bag to entice the foxes to come closer. The foxes came within a foot of the photographer and eagerly waited for food. Then one of the men stated, ‘you better do what I tell you or I’ll take out my gun and shoot you.’”

“Tears instantly came to my eyes,” Taxis continues. “I simply couldn’t imagine how a person could speak to an innocent animal like that. I then discreetly took photographs of the men.”

Feeding wildlife is illegal in US National Parks.

Having heard the name “David” mentioned during the incident, Taxis began searching for wildlife photographers named David on Instagram before realizing that it was world-famous photographer David Yarrow.

“[A]s soon as I landed on David Yarrow’s Instagram page I knew it was him,” Taxis says, adding that she reported the incident to the National Park and filed a witness report after becoming sure of the man’s identity.

The 55-year-old London-based Yarrow boasts over 400,000 followers on Instagram and has had single prints of his sell for over $100,000 at auction. He’s also no stranger to controversy and has developed something of an infamous reputation in the world of wildlife and conservation photography — he apologized last year for an eyebrow-raising photo showing a model standing with her back to elephants close behind.

As news of this new fox-feeding accusation spread, Yarrow confirmed that he’s the person in Taxi’s photo but denied her claims of wrongdoing.

Yarrow tells Fstoppers that he was at the location for an unrelated editorial photo shoot involving a human model, and that his crew only decided to photograph the foxes as they were wrapping up their shoot.

“I would vehemently deny feeding tame foxes,” Yarrow tells Jackson Hole News & Guide. “The last thing on my mind was to photograph a fox. It’s not what I’m interested in.”

The crew also denied to both publications that food was involved, saying that the most they did was make noises and throw snow and a cellophane wrapper from a pack of cigarettes. Taxis stands by her story and says she’s convinced she saw food being used.

Taxis has since started a Change.org petition in an effort to get David Yarrow banned from all National Parks in the United States.

“We demand that Yarrow be held accountable by the fullest extent of the law for corroborating in the illegal feeding of a wild animal,” the petition reads. “David Yarrow is a high profile photographer who many other artists look up to as a role model. By continuing to accept his actions, we award his unethical practices, and send the message to other photographers that they can violate National Park Laws and endanger the lives of their wild subjects without fear of consequences.”

At the time of this writing, over 4,800 people have signed it.

The National Park Service has confirmed that rangers are looking into Taxis’ report of a photography crew feeding foxes. We’ve reached out to Yarrow for further comment and will update this article if/when he provides a statement.