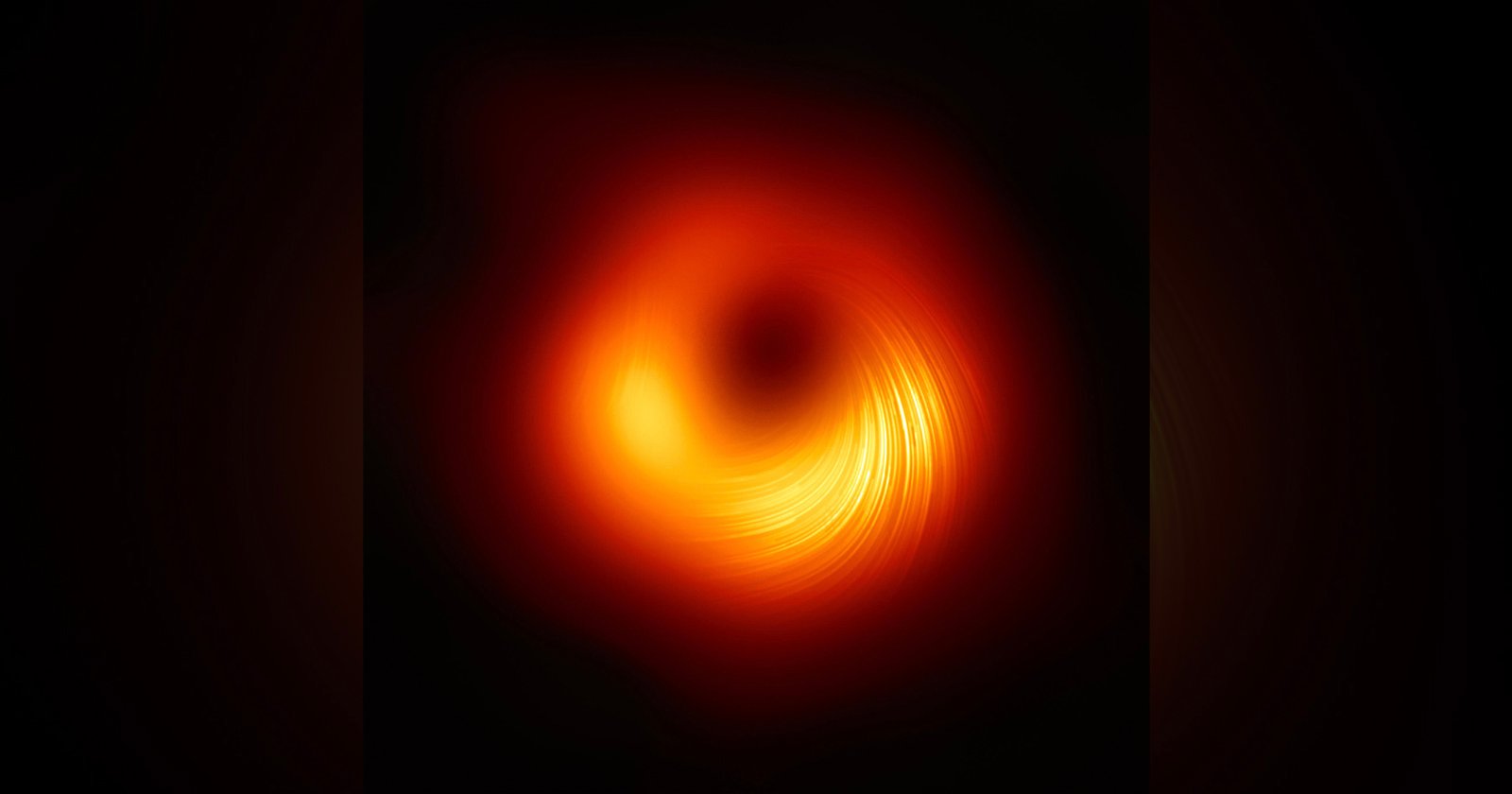 The Event Horizon Telescope (EHT), which was responsible for producing the first-ever image of a black hole in 2019, has today revealed a new polarized view of the M87 black hole that reveals the structure of its magnetic fields, key in explaining how it is able to launch energetic jets from its core.

Since releasing that original image of the black hole, scientists have been delving deeper into the data on the supermassive object at the heart of the M87 galaxy and discovered that a significant fraction of the light around the black hole is polarized.

This research was presented in two papers published today in The Astrophysical Journal.

“The bright jets of energy and matter that emerge from M87’s core and extend at least 5000 light-years from its center are one of the galaxy’s most mysterious and energetic features,” the EHT team says. “Most matter lying close to the edge of a black hole falls in. However, some of the surrounding particles escape moments before capture and are blown far out into space in the form of jets.”

What this research today shows, and is highlighted by this new photo, essentially reveals more about how black holes behave.

“This work is a major milestone: the polarization of light carries information that allows us to better understand the physics behind the image we saw in April 2019, which was not possible before,” explains Iván Martí-Vidal, also Coordinator of the EHT Polarimetry Working Group and GenT Distinguished Researcher at the Universitat de València, Spain. He adds that “unveiling this new polarised-light image required years of work due to the complex techniques involved in obtaining and analyzing the data.”

As the EHT team explains, light becomes polarized when it goes through certain filters or when it is emitted in hot regions of space that are magnetized. Just like looking through polarized sunglasses can help you see better by reducing reflections and glare, the same can be said about looking at the region around a black hole to see how the light originating from there is polarized.

The video below depicts how M87 is seen through a light polarizer.

“The newly published polarized images are key to understanding how the magnetic field allows the black hole to ‘eat’ matter and launch powerful jets,” says EHT collaboration member Andrew Chael, a NASA Hubble Fellow at the Princeton Center for Theoretical Science and the Princeton Gravity Initiative in the United States.

As noted by Gizmodo, the Event Horizon Telescope is not a “traditional” telescope. It is instead a unified term for a group of global observatories that are timed to atomic clocks that look to the sky together. The idea is to create a telescope that is the size of Earth itself and using complicated math all of these independent observatories are all able to look at one object and then account for the differences in time that it takes for each observatory to see the same light.

According to the astrophysicists on the team, the next step would be to see the innermost workings of the core of the black hole. Specifically, they want to see the larger-scale conditions that formed the huge plasma jet, ejected it, collimated it, and accelerated it. Currently, there is too much noise in the image for this to be clear, but adding more observatories to the EHT array, hopefully, will change in the future.

You can use pretty much anything as a camera lens – even shoes and potatoes
A Beginner’s Guide to Pricing Commercial Photography
Nikon Z 28mm f/2.8 Lens Review: Tiny, Mighty, And Cheap
Can You Shoot Underwater Photos with an iPhone?
Nikon, Panasonic Absent from Japan’s Best Selling Cameras of 2021