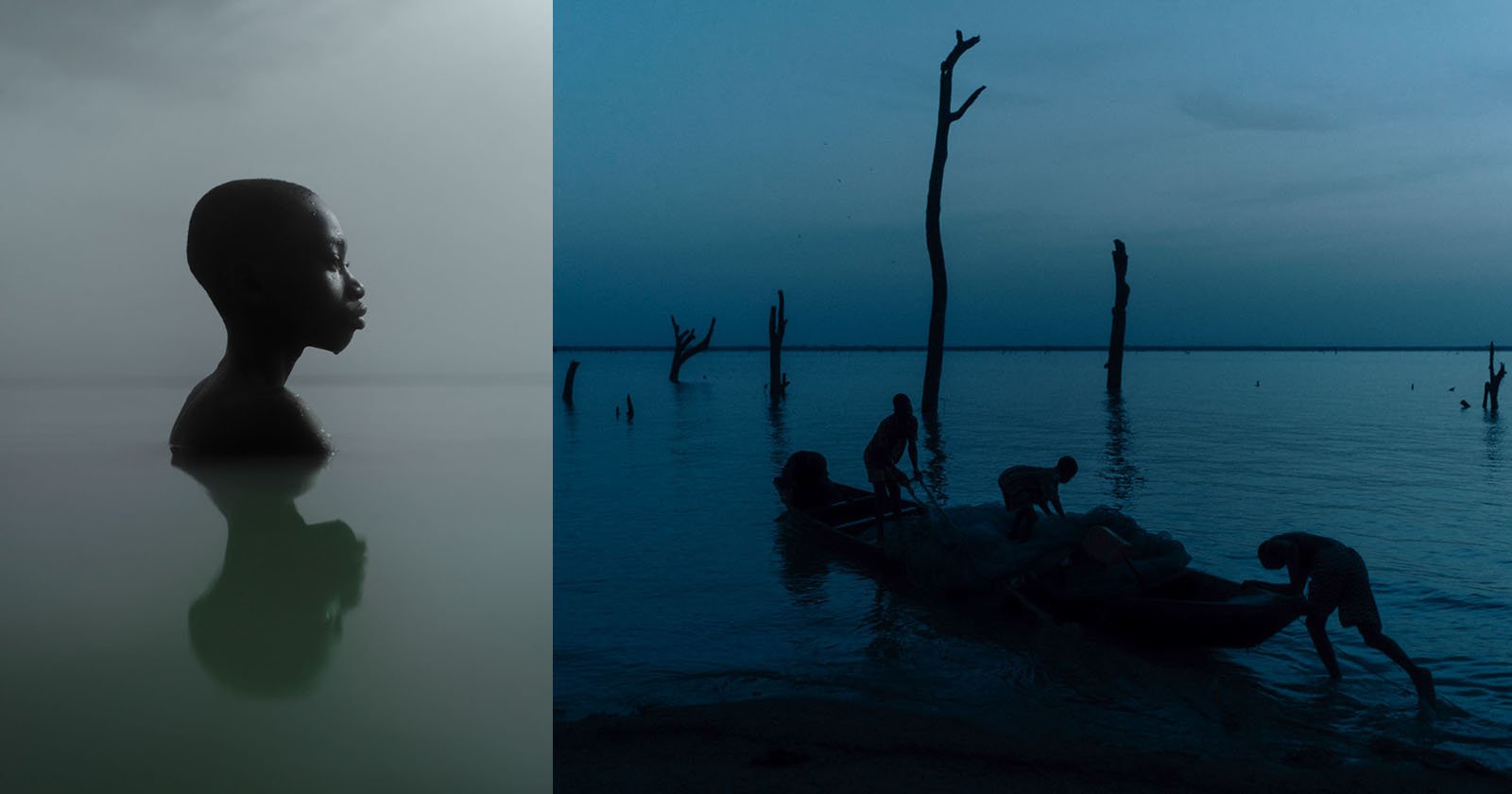 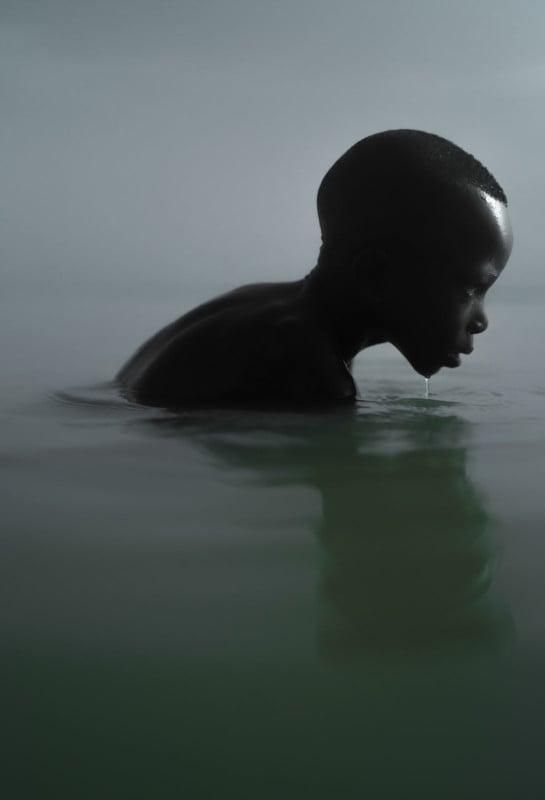 Brooklyn-based photographer and cinematographer Jeremy Snell has created a documentary of the life of young “fisherboys,” who are forced to work on fishing boats on Lake Volta in Ghana.

“I first went to Ghana and specifically Lake Volta with a non-profit organization called International Justice Mission,” Snell tells PetaPixel. “The intent of the trip was to capture content for the campaign against human trafficking of minors on the lake.

“Once I arrived, I was profoundly affected by the beauty and the character of the lake. Life on and around the lake seemed like a fairy-tale. Three thousand miles of dammed water encompass what used to be large forests and hillsides, so the trunks and tips of thousands of trees can be seen as you drift through its waters.” 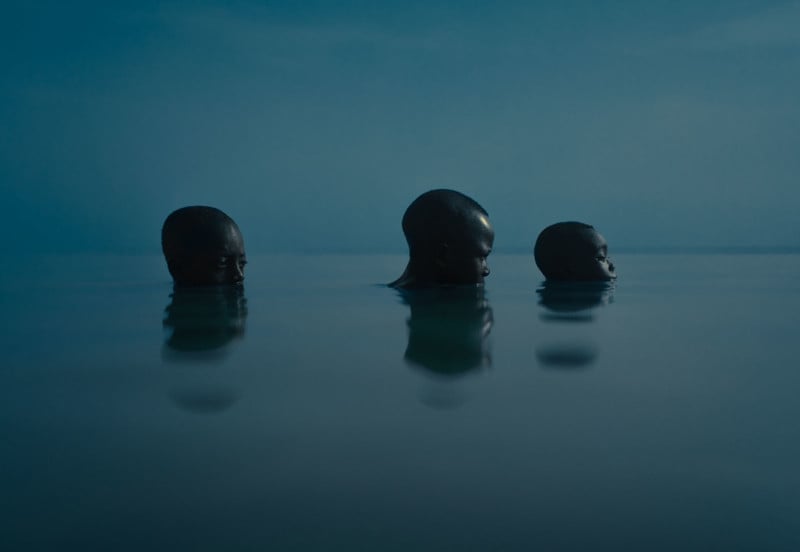 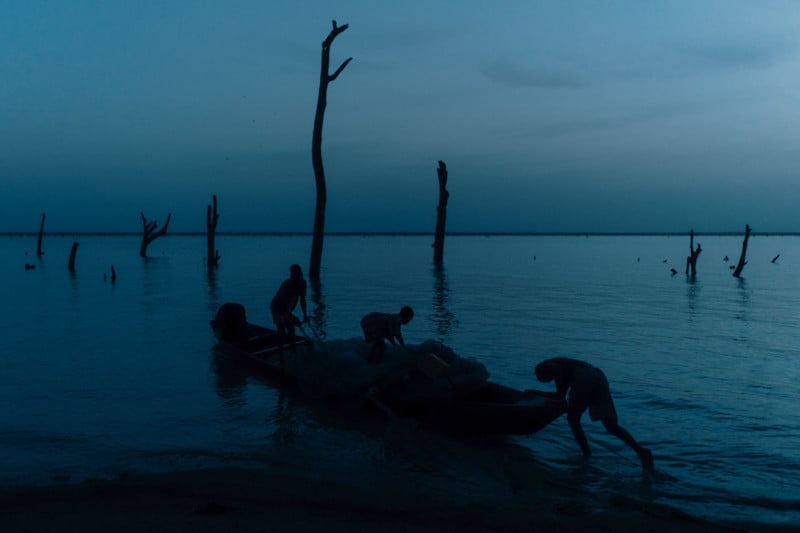 Lake Volta is the largest artificial lake, by surface area, in the world, stretching across south Ghana for about 200 miles. It was created in 1965, when Ghana constructed a hydro-electric dam downstream, using funds from the World Bank, the United States, and the United Kingdom. The dam now supplies all of Ghana’s electricity, with the surplus sold to neighboring countries. Much of the land that was flooded was forest, and trees still stand just below the surface.

“When I first arrived, it was all about taking in the new scenery and capturing whatever caught my eye,” recalls Snell. “The subtleties in the textures, the beauty in the silhouettes of the fisherman and trees on the lake; everything was something I had never seen before. The goal of the trip was to capture a bit of what it is like being on Lake Volta.

“There were massive thunderstorms in the afternoons that would light up the vastness of the lake and strike awe into all those who were on it. Even midday on the lake seemed to have a certain eeriness that accompanied the heat and the floating trees.” 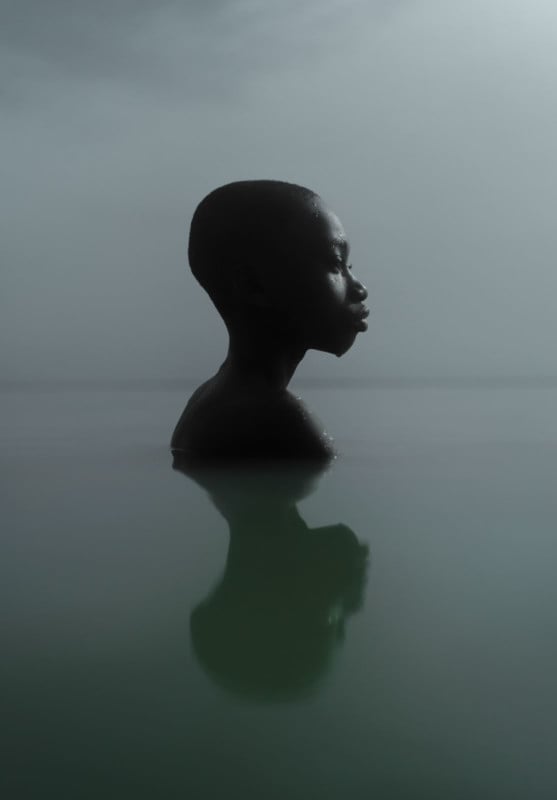 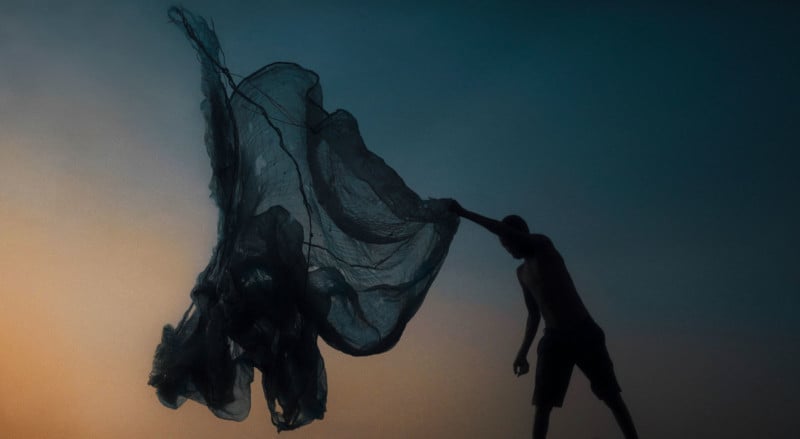 The poverty in Ghana makes it difficult for parents/guardians of multiple children to provide for them. This is used by the boat operating fishermen to lure the children away from their guardians with a promise of a better life that the parents cannot provide.

The young boys are then made to work on the fishing boats. When the fishing nets get caught in the tree limbs below the surface, the children have to dive under the murky water to free the nets. Their tiny hands and ability to maneuver between tight spaces between the dead tree limbs make them physically suitable for this hazardous job. 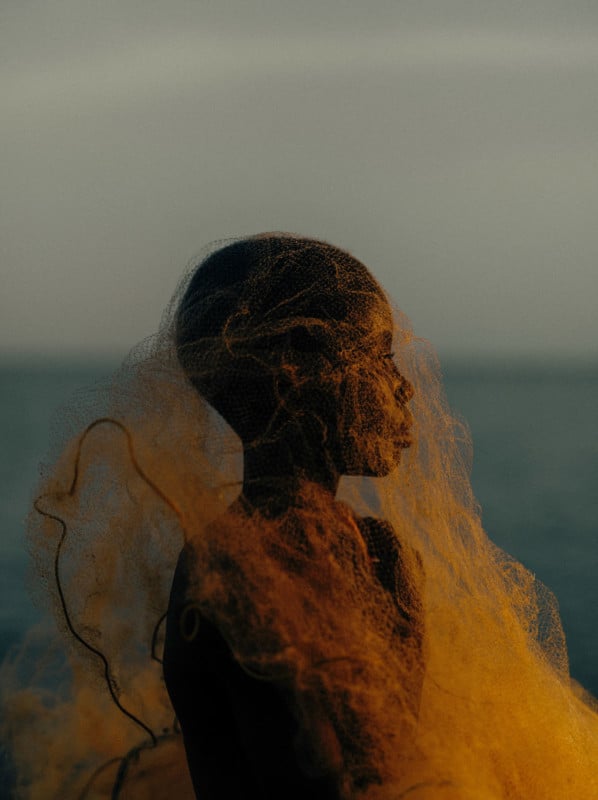 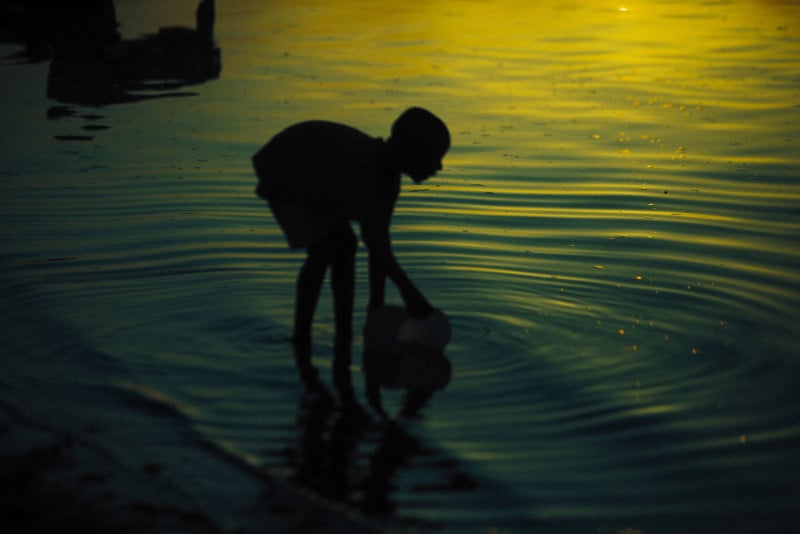 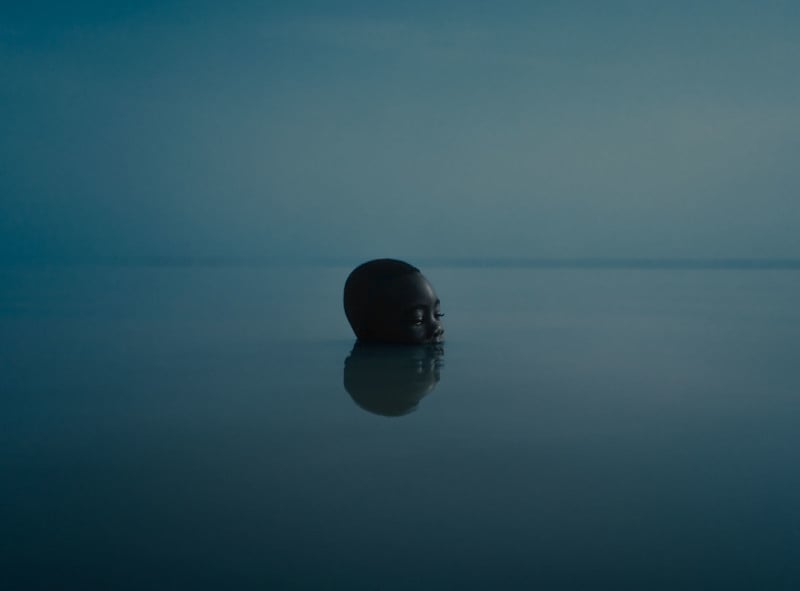 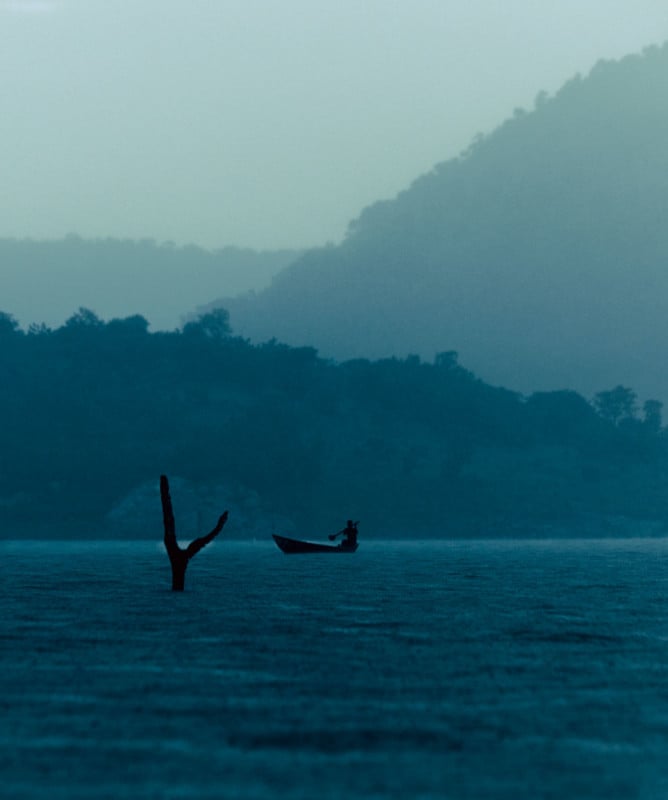 Snell found himself in a difficult place between documenting with photographs and facing the plight of these young, unhappy fishermen. The boys’ low-key portraits surrounded by the turquoise glow from the perpetually warm waters of the lake’s dark waters set the stage for a peaceful existence. However, there is a dark secret of child labor here. 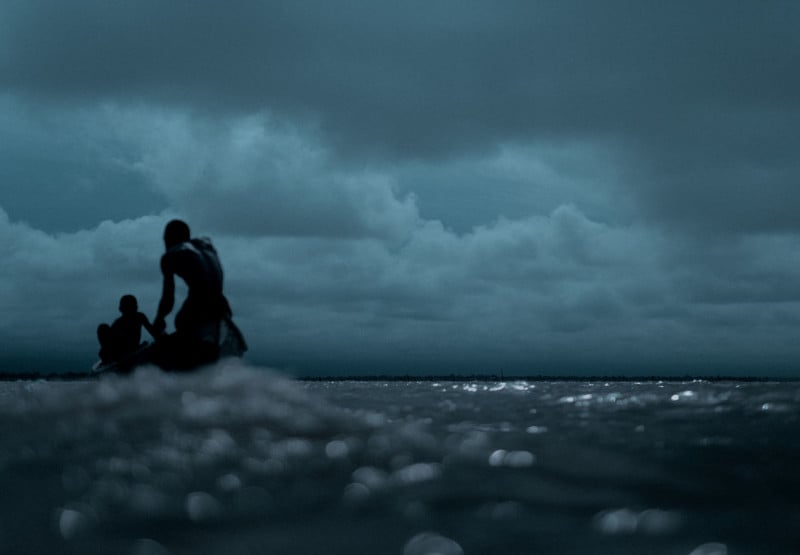 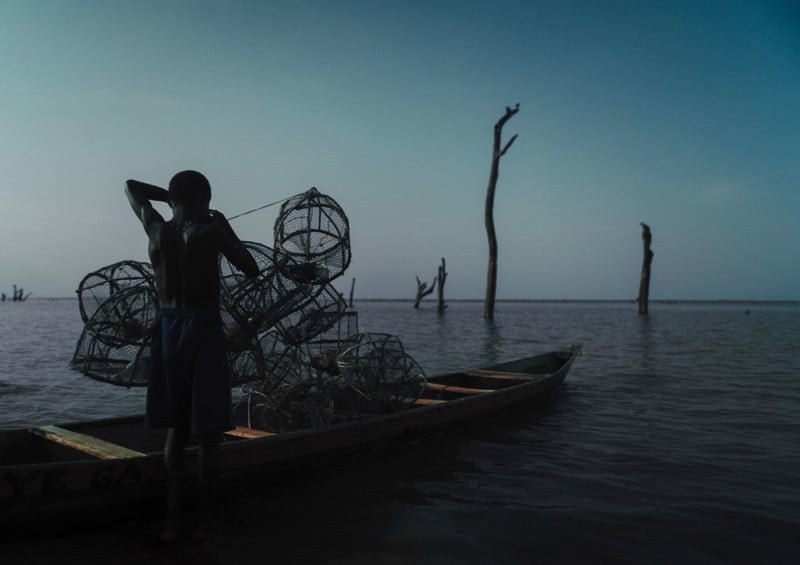 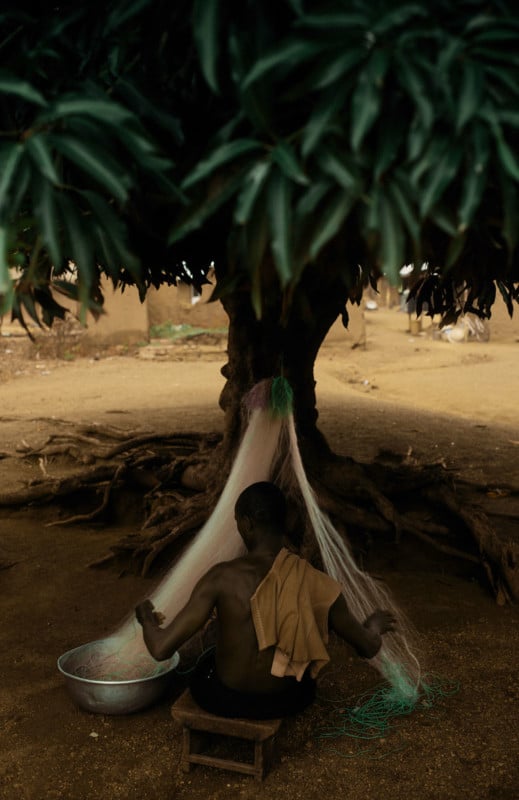 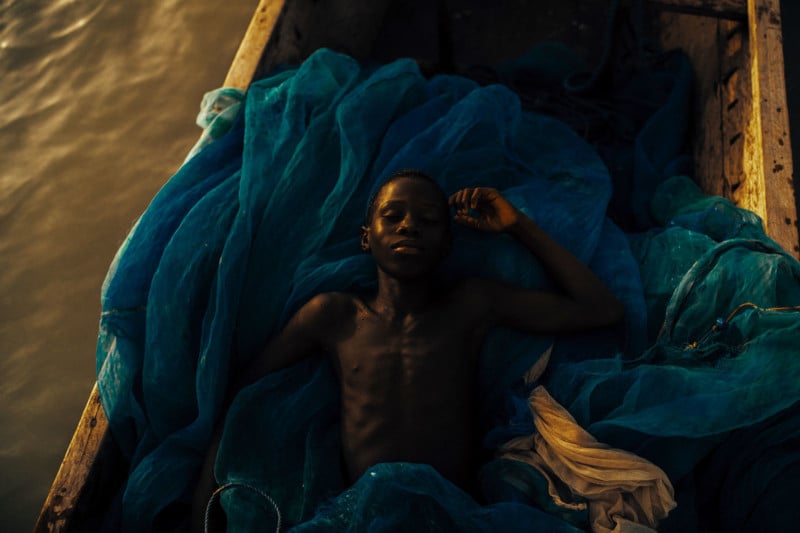 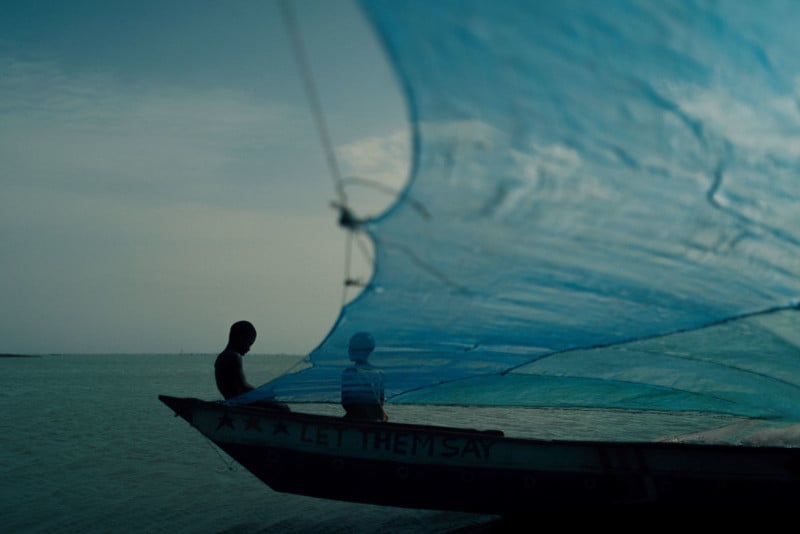 “Beyond the documentary photos of fisherboys working on the lake, I found myself even more captivated by the faces and eyes of the kids who lived by the lake,” says Snell. “Through portraiture, I hoped to convey the beauty in simple moments found on Lake Volta.

“For me, the photographs point to the beauty of the lake and those who live on it, the complexity of life in the area, and the treacherous situations some of these kids find themselves in.” 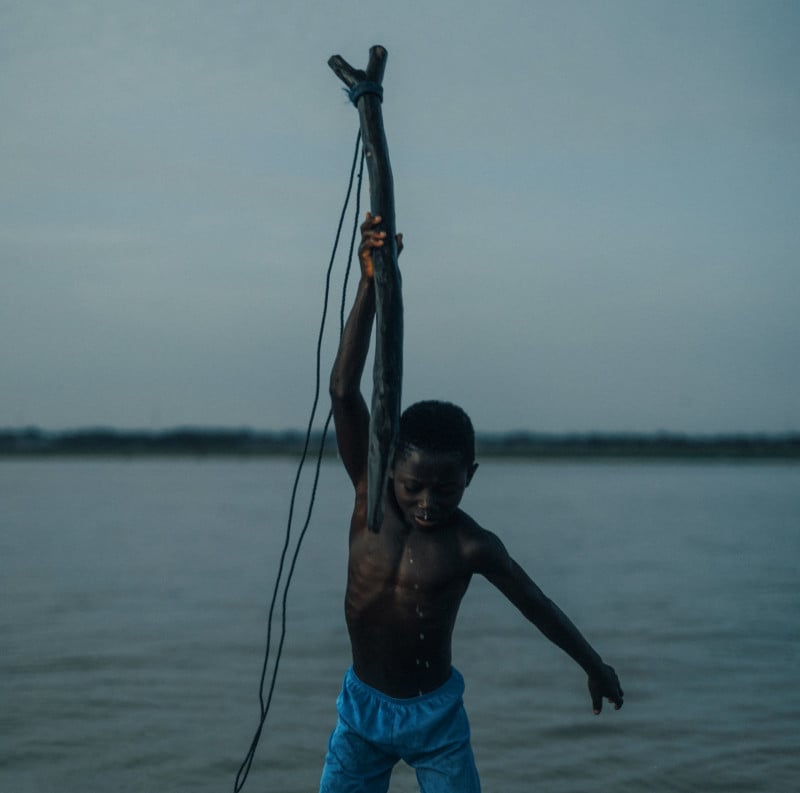 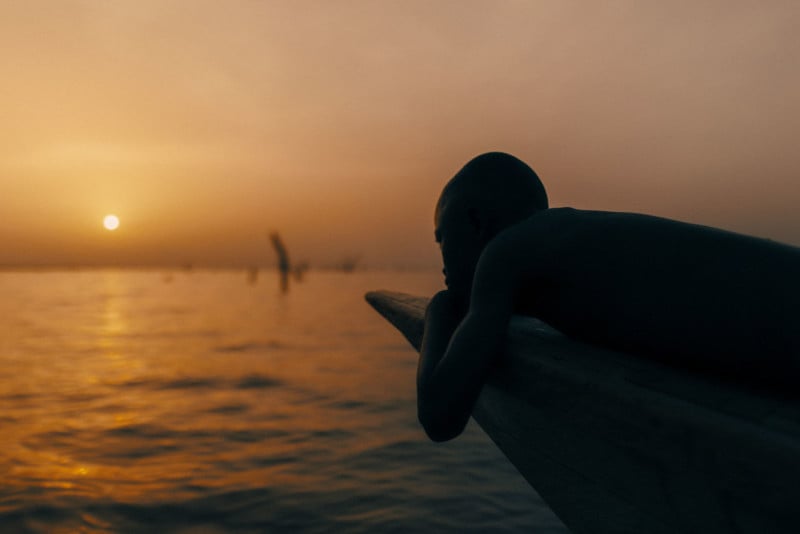 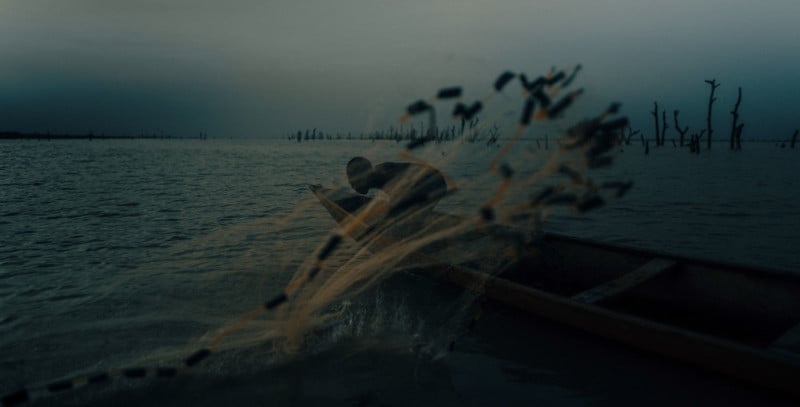 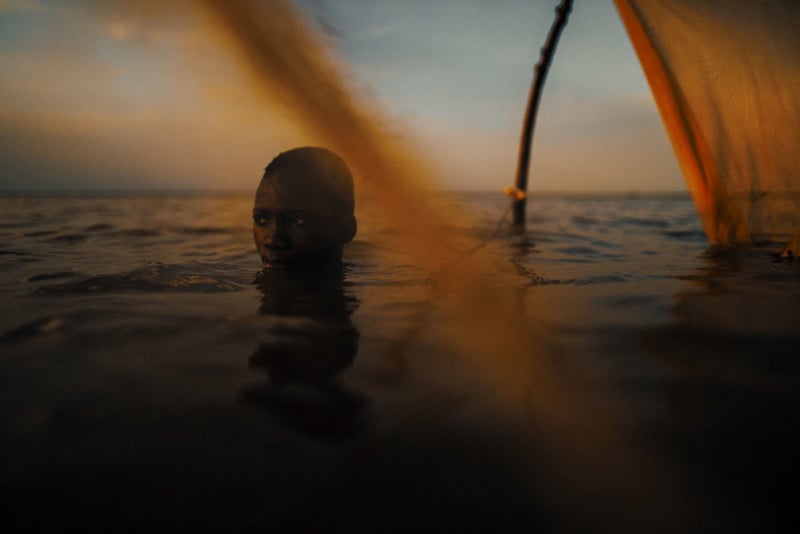 Snell has traveled worldwide and always managed to communicate with his subjects even when he could not speak the language.

“I spent most of my life up until university living and traveling with my parents throughout Asia,” recollects Snell. “I started using photography during this time as a means for me to explore my surroundings; holding a camera gave me the confidence to interact with people I didn’t know, which also taught me a lot about non-verbal communication.” 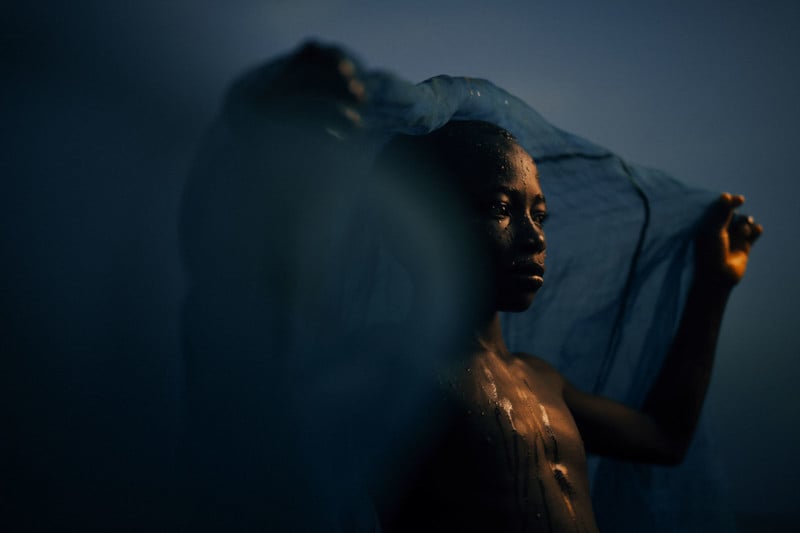 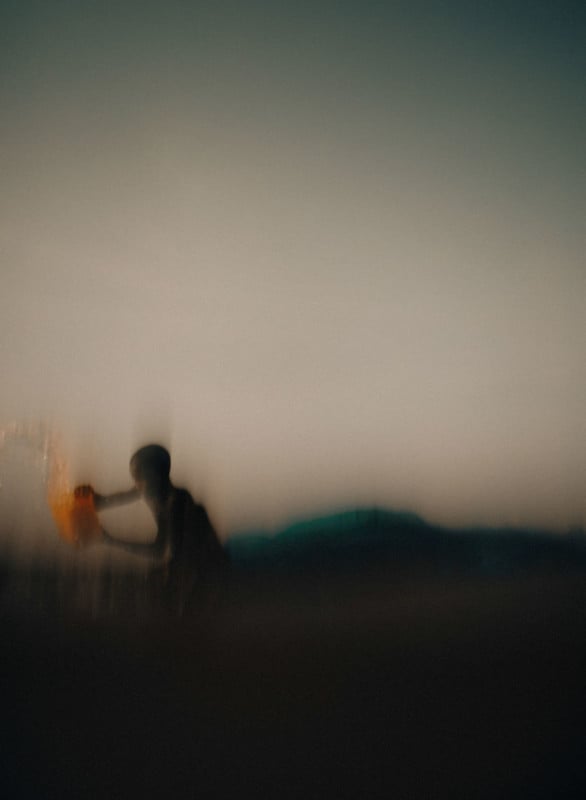 The photos in this series are of actual fisherboys who work on Lake Volta, although some are child actors who lived near the lake, and Snell got permission to photograph them too.

Snell wants his book Boys of Volta to raise awareness for these child laborers, some as young as six,  but at the same time also celebrate the beauty of the people and their surroundings. 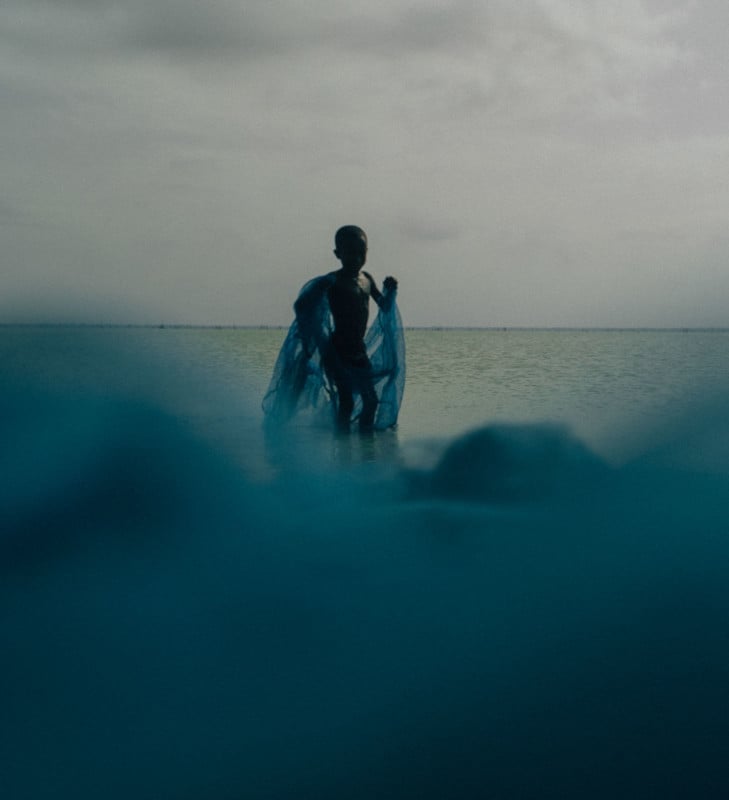 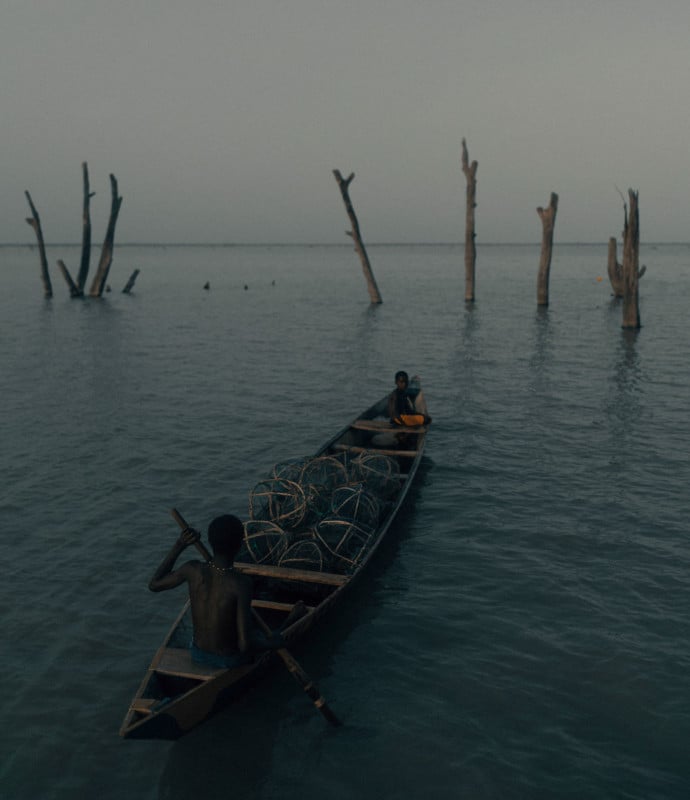 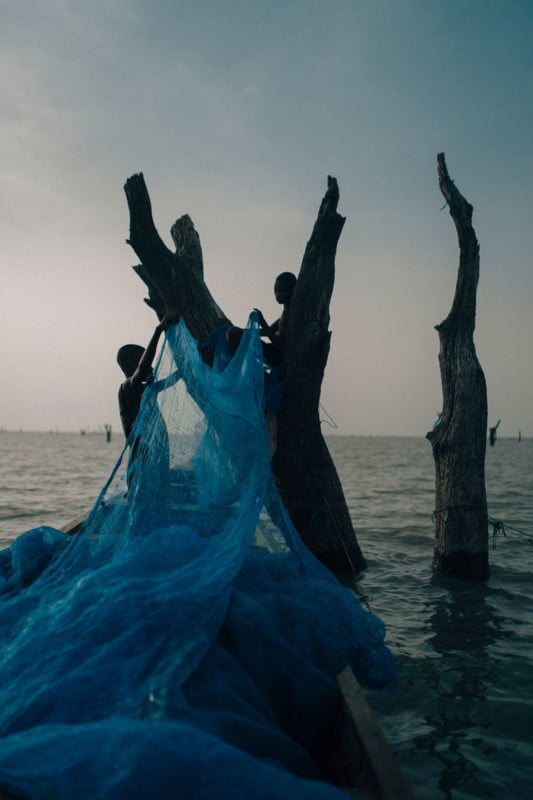 It is estimated that 7,000 to 10,000 children work in the fishing industry on Lake Volta.  CNN placed the number at 20,000 in a Nov 2018 report. The way they are employed has been described as slavery in The Guardian and by the CNN Freedom Project.

A collection of portraits is now available as Snell’s first book, titled Boys of Volta, from Setanta Books. 10% of this book’s profits go to International Justice Mission, an NGO collaborating with partners in the criminal justice system to help law enforcement protect vulnerable children.

Image credits: All photos courtesy of Jeremy Snell and used with permission.

Manfrotto Move is a Ridiculously Good Idea and a Workflow Wonder
Are the Megapixel Wars Really Over?
Seven tips for using shadows to elevate your photography
The Best 35mm Film Cameras to Buy in 2022
Five tips for celebrating sports in commercial photography