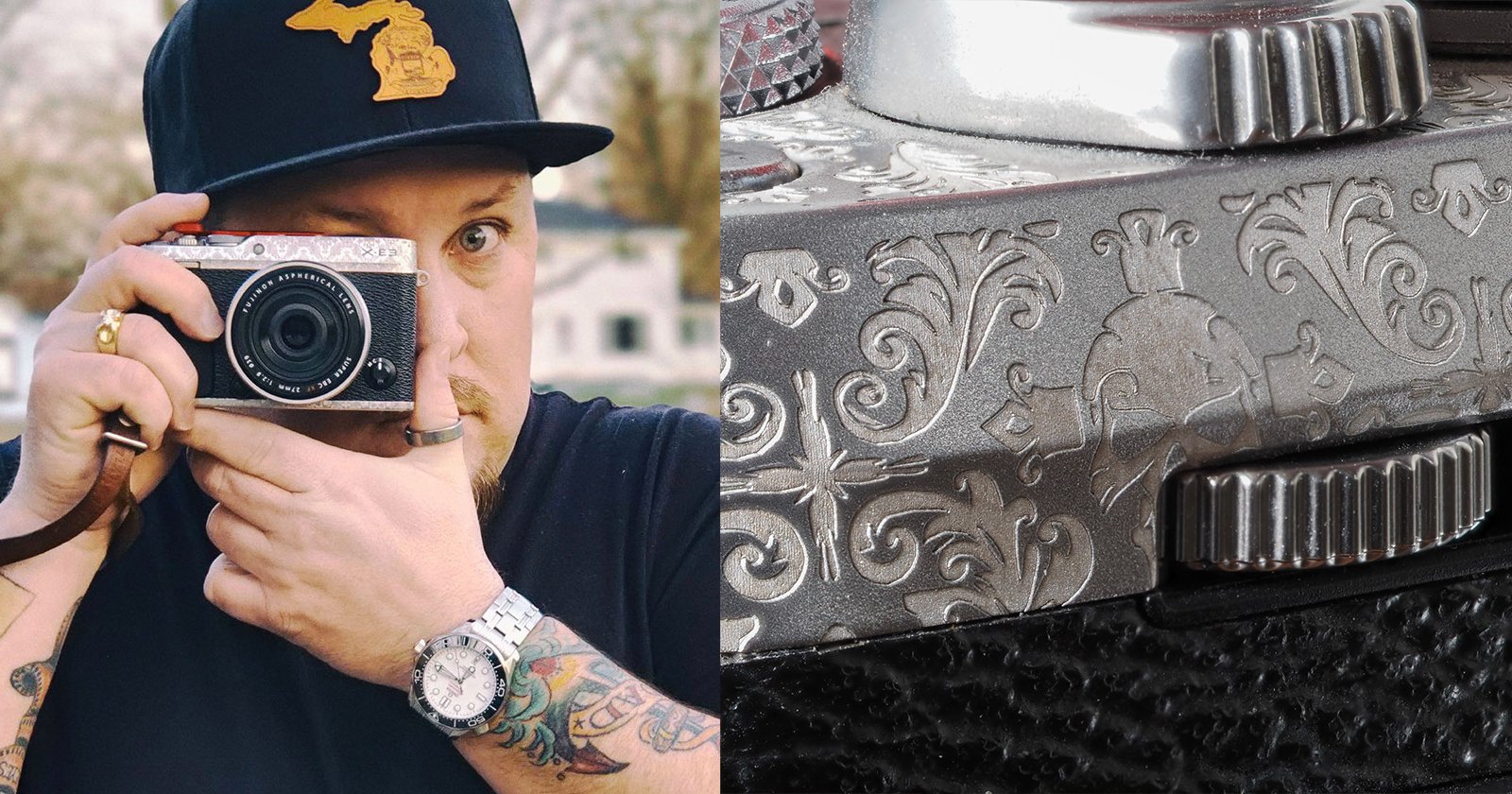 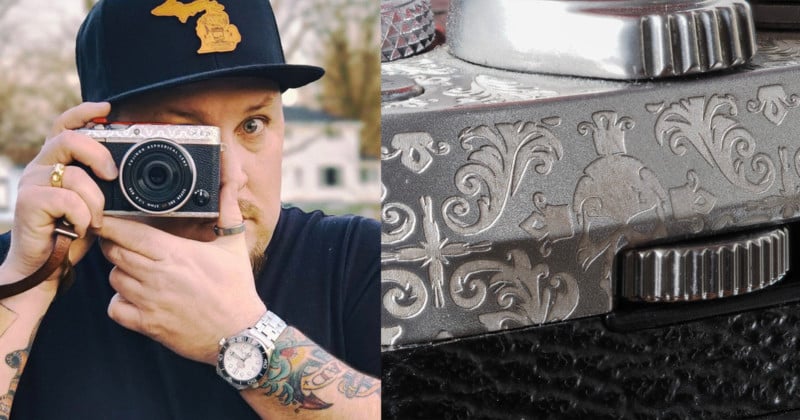 As photographers, we are immersed in a world of creativity, expression, and individuality. Our craft is one that we pursue in hopes of creating something that evokes emotion and thought, insight and so much more. So why are our cameras so… boring?

And as we continue on our journey as artists — because that is what I believe we are — we find that outside of the actual art itself, there is little in the way of individuality and expression when it comes to our equipment. Sure, some of the more adventurous among us may venture into the world of film if we only shoot digital and some of us may start adapting vintage glass to use on our digital cameras, but at the end of the day, we are still left with equipment that looks like every other photographer’s gear.

But what if you get bored of the same black box with the same familiar lens attached? I personally have spent more money than I’d care to admit on things like custom leather straps, colorful shutter release buttons, thumb grips, leatherette half-cases, and so on. These were all purchased in my quest to individualize my camera gear. Some will read this and scoff at the thought of dressing up their gear while others will completely understand my pursuit of making my gear distinctly mine. For those looking to move beyond the temporary embellishments like straps and shutter release buttons, those who are like me and willing to commit to something more extreme (this is coming from someone whose arms are covered in lifelong commitment: tattoos), I offer you the ultimate in personalization:

Recently an artist friend of mine, Jakob Soper reached out to tell me about his latest purchases to create art with. Lasers! These aren’t the ones you see in ads on Facebook or on Kickstarter, these lasers are much higher powered and capable of not just lightly etching the finish on the surface of your MacBook or the like, but actually cutting through it. Now don’t let that power scare you away! Because these lasers — when controlled by someone like my friend who has years of experience — are capable of the most intricate details.

I immediately responded to his message with a question, “Do you want to engrave some cameras?”

At first, he wasn’t sure why I’d suggested I have him engrave my cameras versus something more pedestrian like, say, a keychain, but after I told him my vision for what I wanted to be done he got excited and we began planning.

Our first order of business was my favorite street camera, the Olympus PEN-F. The Olympus PEN-F is a beautiful camera designed to look similar to a rangefinder with an offset electronic viewfinder and classic step-down top plate. But more importantly, this camera was created to be a digital homage to the original Olympus PEN-F 35mm half-frame camera released in 1963.

That camera was small and perfect for carrying anywhere, especially in the streets. The front of the camera was engraved with the words Olympus-PEN and immediately to the right of that was a large Gothic letter F. This Gothic F is an eye-catching branding statement and somehow never made it onto the 2016 digital homage PEN-F. In my mind, this was a terrible omission I was about to correct it!

When I delivered my cameras to Jakob I told him the first camera I wanted us to tackle was the PEN-F and I showed him what he’d be engraving, and where it would go. This was by far the easiest of the two cameras to customize thanks to the big empty space for engraving and for the relatively simple design of the letter F.

Jakob started the etching process and sent me some cell phone videos of the laser at work. After five passes, he sent me photos to show the depth of the engraving and we decided to run the laser for five more passes to get the engraving as deep as the original camera markings.

Upon completion, I was blown away at how crisp the laser cut vs what I assume is a cast-in process for the lettering done by Olympus from the factory. Every corner is very well defined, the curves fluid and perfect — laser perfect. 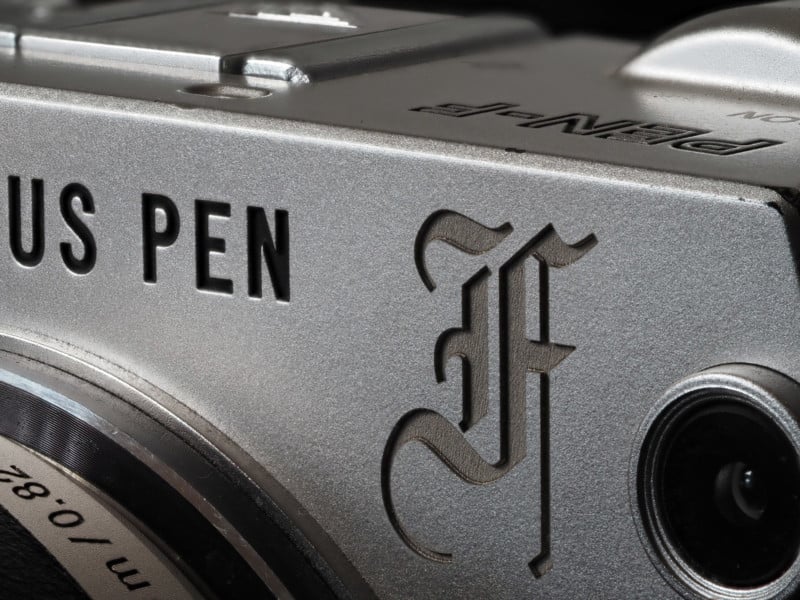 All that was left was for me to do was blacken the letter to match the original paint on the camera. That was done using acrylic model paint and syringe. Once you put a single drop of paint into the engraving, the capillary effect draws the paint throughout every curve and fills the space evenly. 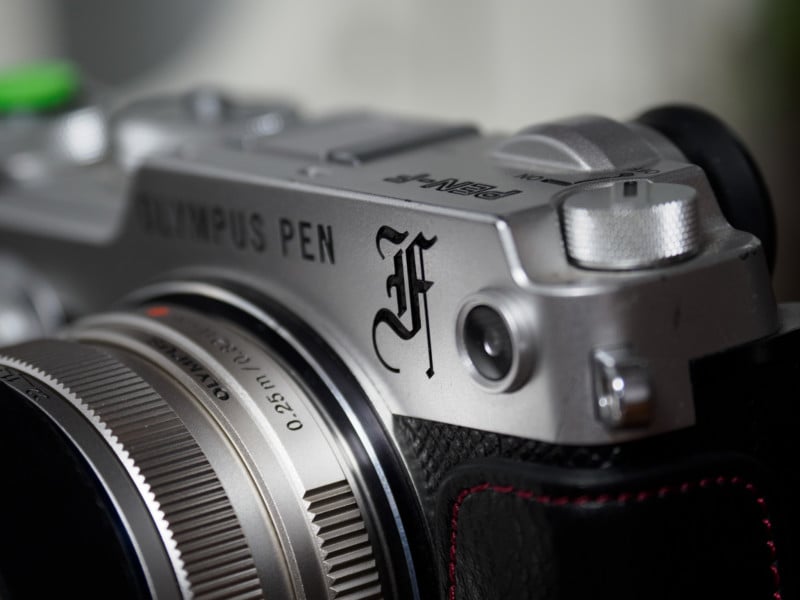 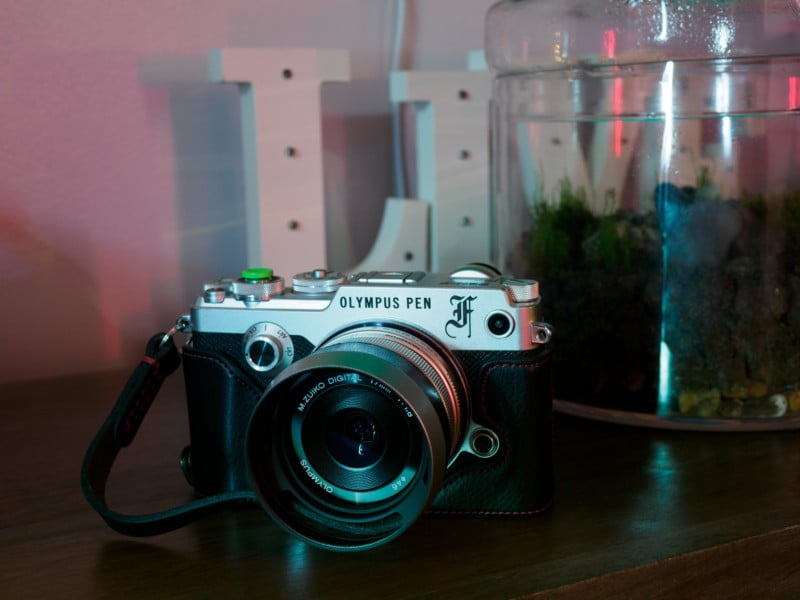 With one camera down, it was on to what I felt was going to be the real head turner out of the bunch: my Fuji X-E3. Having spent nearly a decade only ever shooting Olympus equipment, one of the first non-Olympus cameras that I bought was the Fuji. I loved the form factor of the PEN-F but was dying to play with the Fuji color science. With the Fuji, I had settled on a design that was surely going to test the capabilities of the laser — and Jakob.

The pattern is a floral Damask pattern that has a decidedly Victorian feel to it but with a little bit of my personality mixed in. Comprised of ornate, floral sprigs and embellishments, the central design in the pattern is skulls. Yeah, I’m that guy. If I can get something that takes the delicate beauty of a floral pattern and can pop a skull in there for contrast, I will.

“See if you can put it on the bottom and work around the battery door first,” I said to Jakob.

He got ahold of me later that with a photo showing that he had no problem working around the battery door and proceeded to tell me that he could work around anything on the camera, really. This was very exciting news! Jakob proceeded to map out the entire top plate and face of the camera so he could engrave around all the dials, buttons, lettering, and lens mount.

He once again sent me a video of the process to ask how deep I wanted the engraving to go and I decided to keep this one shallower than I went on the PEN-F, since there would be more physical contact with the engraved surfaces on the Fuji. If we’d gone too deep, the camera would feel abrasive and may end up not being much fun to handle and that is not how a camera should feel in your hands.

The end result was for me much better than I could have imagined! The intricate design flows around the camera and is noticeable from a distance. I have decided to keep this engraving bare metal and not blacken it the way I did on the PEN-F since I think the blackening process might make everything look too messy. 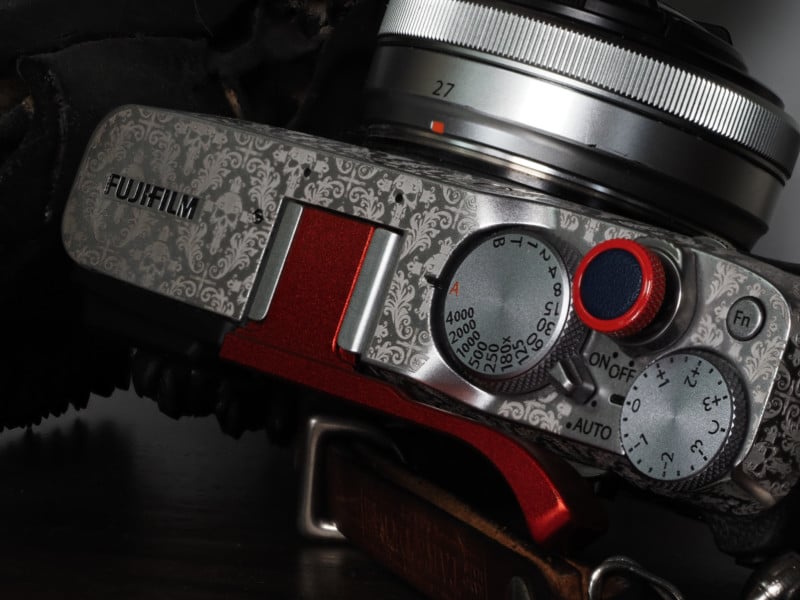 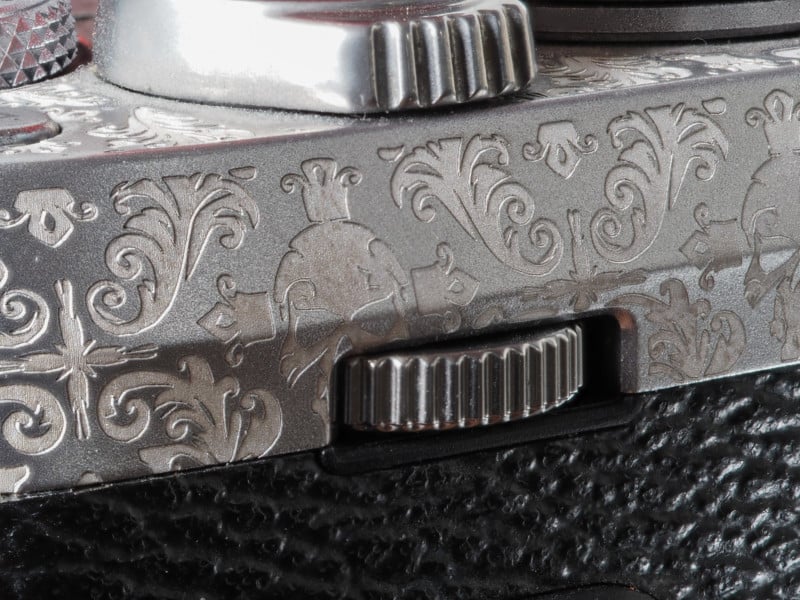 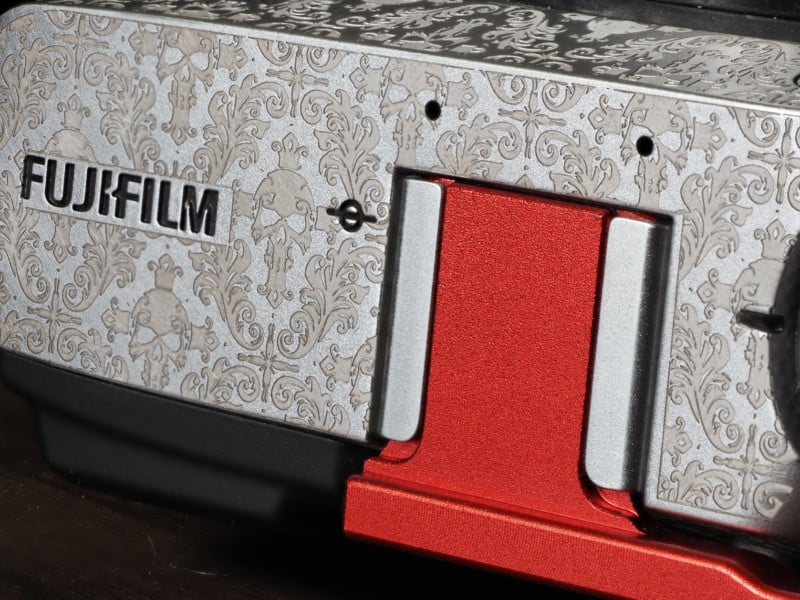 I am now working with Jakob on design ideas for my lenses and other pieces of camera gear. Not everything will end up as wild as the Fuji though. Other ideas we have been kicking around are putting contact information on equipment in a discreet way or branding with people’s social handles or logos. The sky is really the limit with what he can do and it is now up to us to figure out what else we can do to make our gear uniquely our own.

Editor’s note: While Jakob doesn’t quite have a system in place to take orders (and notes that each job is custom to the device), for those interested in the process you can reach out to him through Instagram or on Jakob Soper’s website here.

Extend a Building in Photoshop Using The Vanishing Point Filter #shorts
‘The Stolen Scream’: Photographer Creates, Internet Copies, NFT Reclaims
On Expectations
How to Restore Reverse Image Search with Right-Click in Chrome
How to Downgrade a Canon Camera’s Firmware to a Previous Version