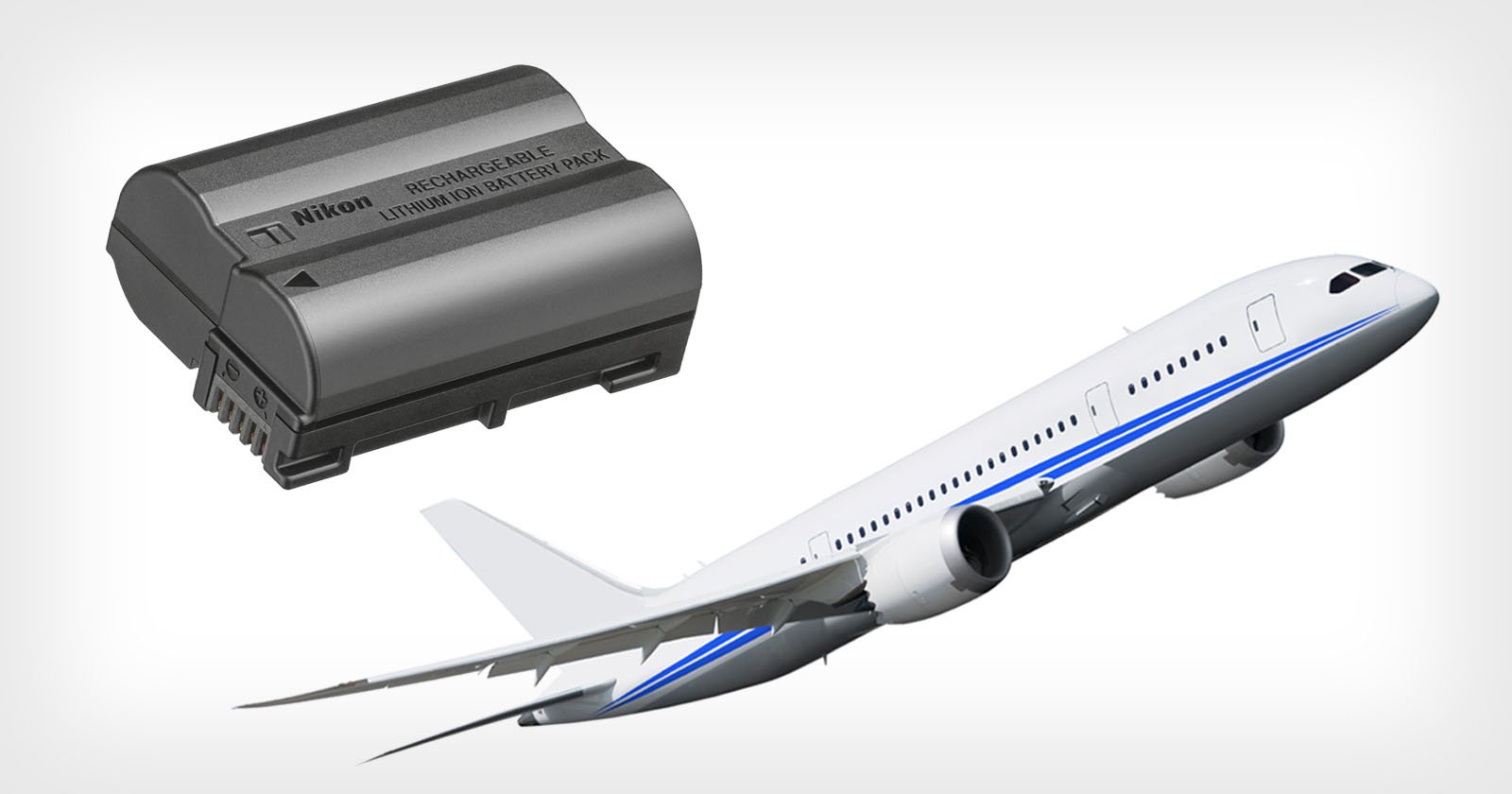 I’m photographer Jay P. Morgan from The Slanted Lens. In this video and article, we’re going to take a look at batteries. What you can fly with, what you feel comfortable checking in your check bags, what you should carry on with you, and what you shouldn’t take with you.

Because we have all these batteries, and they’re in all of our equipment and we’re going to fly somewhere, what are the restrictions when it comes to flying with batteries? 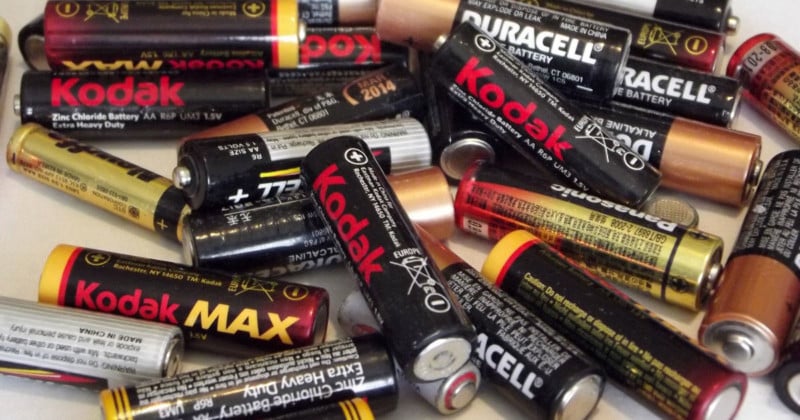 First off, let’s go right to the really basic batteries. If you’ve got the old standard run-of-the-mill batteries like AA, AAA, C, and D – all these batteries. Can you fly with these? Can you check them? Can you carry them on? What can you do? How many can you take with you? 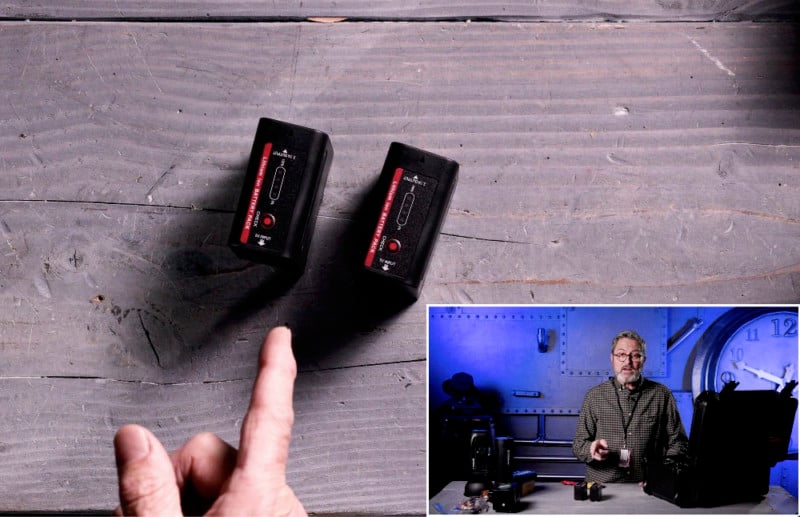 These are batteries I use a lot. These are Sony L batteries or NPF batteries. These batteries are seldom installed in anything. As wonderful as these L series batteries are, the problem with them is that they have contacts and they’re rarely ever in anything. Are they a 100-watt battery? No, they’re not. Generally speaking, these larger ones are going to be about a 48-watt battery and the smaller ones maybe like 25 to 30 watt. But they are part of that four battery contingency you can carry on the airplane.

You can carry eight of these and that equals 100 watts for every 2. Because they’re just under 48 watts or just around 48 watts each. So two of 48 watt equals one of the 99 watt. You know four of these equals two of these. I will often carry at least two or three of the 99-watt batteries and about four of the 48 watt. That way I have enough batteries at that point.

Technically speaking, you can’t have a whole bunch of these loose batteries without that becoming part of your lithium-ion battery restriction to carry on to the airplane. 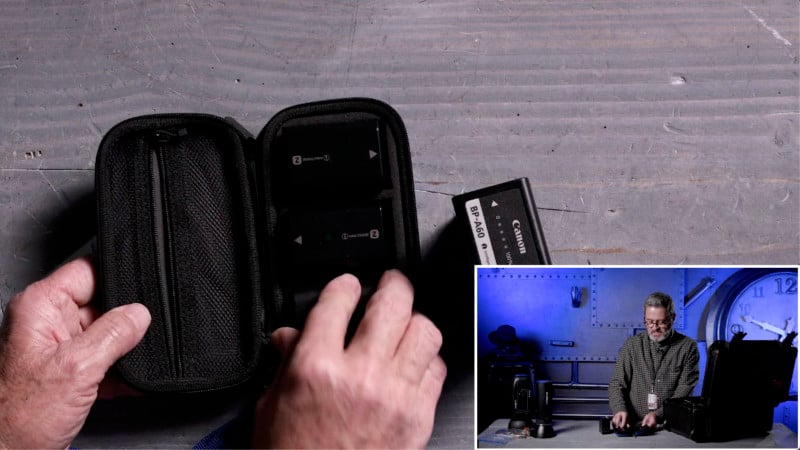 I put all of my batteries in a small zipper case. In the zipper case I will have my Sony or Canon batteries all lined up and all zipped together. I put a label on it that says, “Sony batteries”. I’m not making any secret about what it is. I’ve never been stopped or asked about this at all because it is an enclosed container. It’s zipped. I’ve never had an issue with it.

You can check any battery for a piece of equipment into your checked-in baggage as long as the battery is installed in the device that it runs. So as long as my battery is on my Westcott FJ400 then I can check it. A lot of times I have a case that has 4 FJ400s in it and I check that bag and put it on the airplane in my SKB case. I do that all the time.

The minute I separate this, and I now have a battery in my hand, I can’t put it loose in my checked-in baggage. I now have to carry it on. So the best way to carry the batteries for your strobes is to keep them installed on the device. The reason for this is that most batteries that are installed in equipment are 99 or fewer watts. So like the FJ400 battery is about a 65 watt. And the FJ200 battery is about a 45-watt battery.

Those are under the battery restriction level and they are in the device. So there’s no possibility that this is going to accidentally fall against a piece of metal and create some kind of a short and cause a fire. As long as it’s installed in the device, you don’t have to worry about it being an issue on the airplane.

For production, we carry larger 99-watt batteries. They are super small V-mount batteries and super lightweight. They are an excellent battery because of their size. These are pretty revolutionary because they’re so small. How many of these can I carry on the airplane? TSA says four, and some airlines say, four to six or eight. So that is a little unclear.

Some airlines will give you special permission to carry up to one 300 watt battery, not more than one, over 160 watt and up to 300 watt. But you have to check with the airline, and you have to get written permission from them. Don’t risk it unless you have that, it’ll never work.

How should you package your batteries when you’re going to travel? You might be wondering to yourself, “Well, why should I package my batteries when I travel?” It just avoids any questions going through TSA and avoids any questions that may come up with the airlines. If they are packaged correctly, most of the time, people are not even going to notice or care. So if you package them like one of these three ways, you’ll just make sure your batteries are going to fly right through and on the airplane with you without any problem. 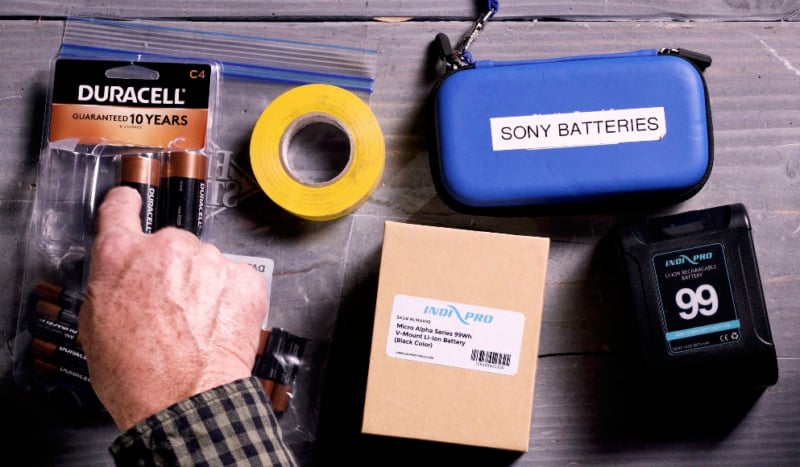 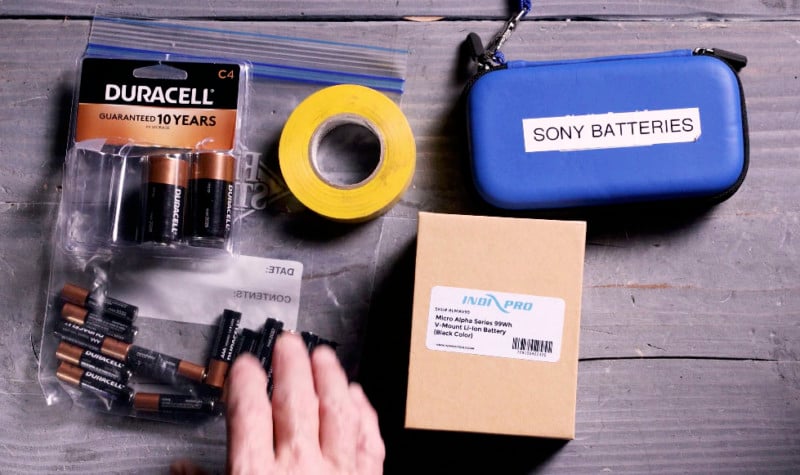 2. If you can’t put them in their original packaging, then what I do is I just do something to secure them. Put them in a Ziploc bag. That means that they’re all together and they’re less likely to touch a piece of metal or something and create a short. I do this for my batteries.

3. If you’re going to travel with the battery, you just simply take your battery, take a little piece of electrical tape and tape over the contacts. I use yellow electrical tape because I want them to see it and know that I have taken the time to make sure that battery is not going to have any kind of electrical short. 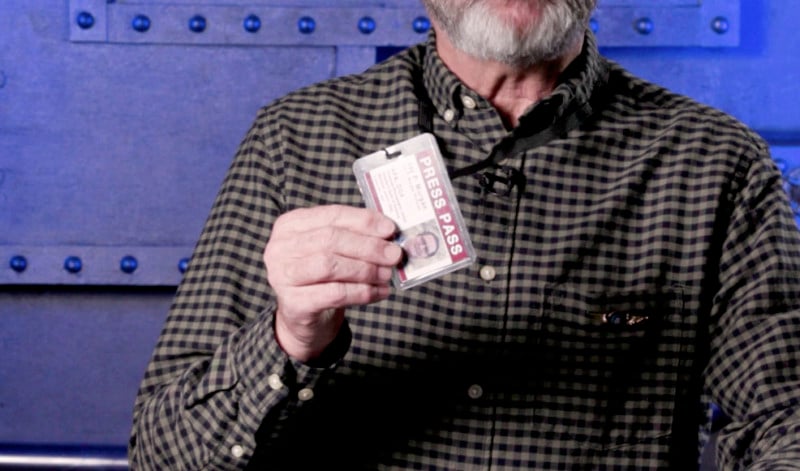 1. Number one is get a media badge. This is a great indicator of the fact that you are a professional photographer or videographer, and they’re not going to harass you about your equipment. With a media badge, you can call ahead of time and tell them that you are flying with the media rate. And what that means is that they don’t give you free bags, but they’ll allow your bag, rather than being 50 pounds, to go as high as 90 pounds.

So when you have a bag that you’re checking on the airplane with a ton of equipment in it, that media rate allows you to have that extra weight without having to pay a premium for it and that makes it much easier to fly with your equipment. You are legitimately a business just because you are a business. You don’t have to work for a large corporation. You can work for your own company.

I’ve flown with my media badge many, many times. I have a business card that matches it. So those two together become proof that you are media and if you have your stuff in something like an SKB case or some case that looks like media, it’s not going to be a problem.

2. Number two is get TSA precheck. It’s just an easy thing to do. It lasts for about five years. They are not near as uptight in that precheck line as they are on the other side. So I just think precheck is an absolutely fabulous way to fly. I’ve done that now since it came out. It’s been perfect. 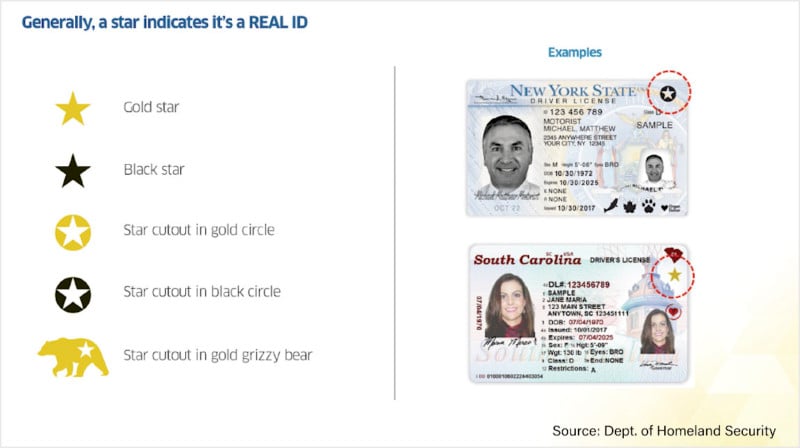 3. And last of all, don’t forget there is the REAL ID and this is something that just makes it even quicker to get through the airports. It means that you’re pre-screened, that they know you’re less of a risk and so carrying the batteries and things are going to be less of an issue for them because they know that you are an individual that they have all your information.

So I think the Real ID is a great thing to have as well.

That’s the basics for all battery travel, make sure you tape them up and secure them so they’re not going to be loose. You can get everything on that airplane and go where you need to go.

Profoto B2 Long-Term Review: A Small Flash That Punches Above Its Weight
Are the Megapixel Wars Really Over?
The Best 35mm Film Cameras to Buy in 2022
How to Restore Reverse Image Search with Right-Click in Chrome
Photo Editing App Bazaart Adds Video to Keep Up with Picsart