When the world went to digital and companies like Kodak and Polaroid bit the dust, Fujifilm managed to succeed, and still brings us film today (even if they have killed off a lot of the favourites). How? By switching things up and expanding into other areas, taking their chemical expertise to fields such as cosmetics and medicine.

Fujifilm has been working in rapid diagnostic testing equipment and reagents for infectious diseases since 2011. And now, Fuji’s announced that they’ve received CE certification for a “highly-sensitive and rapid antigen test kit for SARS-CoV-2 in Europe utilizing silver halide amplification technology”, according to a press release from the company.

Fujifilm can now confirm that even with SARS-CoV-2 antigen, a highly sensitive antigen test is feasible with the application of silver amplification immunochromatography. The company developed an antigen test kit that can rapidly and sensitively examine the presence of SARS-CoV-2 antigens in specimens, detecting the virus at an early stage and in view of a relatively low viral load. Fast results are produced within 10-13 minutes.

The test still involves shoving a stick up through your nose pretty deep using nasopharyngeal swab samples, but the results are now ready within minutes instead of having to wait for it to be processed by a lab using current testing methods. They say it can be performed within the community as well as in clinical settings.

You can find out more about Fuji’s silver amplification technology here and the test specifically on Fuji’s COVID-19 website. 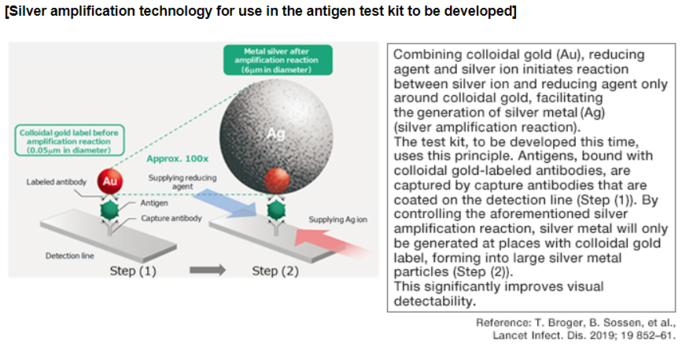 Fujifilm has also been running trials since February of last year with its antiviral drug Avigan for treating COVID-19 which saw a significant stock price increase after a successful trial in China. Phase two trials had begun in the USA by April, and in September announced that they were seeking approval for the drug in Japan as a treatment for COVID-19 after it obtained positive results during Phase 3 trials in Japan.

Unfortunately, that approval was denied, with a health ministry panel stating that the trial data was inconclusive. But Fuji is trying again, with more stringent testing. It has been approved as a COVID-19 treatment in Russia, India and Indonesia.

Retro Review: The 2001 Canon PowerShot Pro90 IS
The CharisMic is a magnetic lapel mic that doesn’t ruin your clothes
Google Pixel Devices Get ‘Night Sight’ Support for Videos… Kind Of
Polaroid Collaborates with Keith Haring to Celebrate His Legacy
How to Pose Men for Natural-Looking Portraits: A Detailed Tutorial