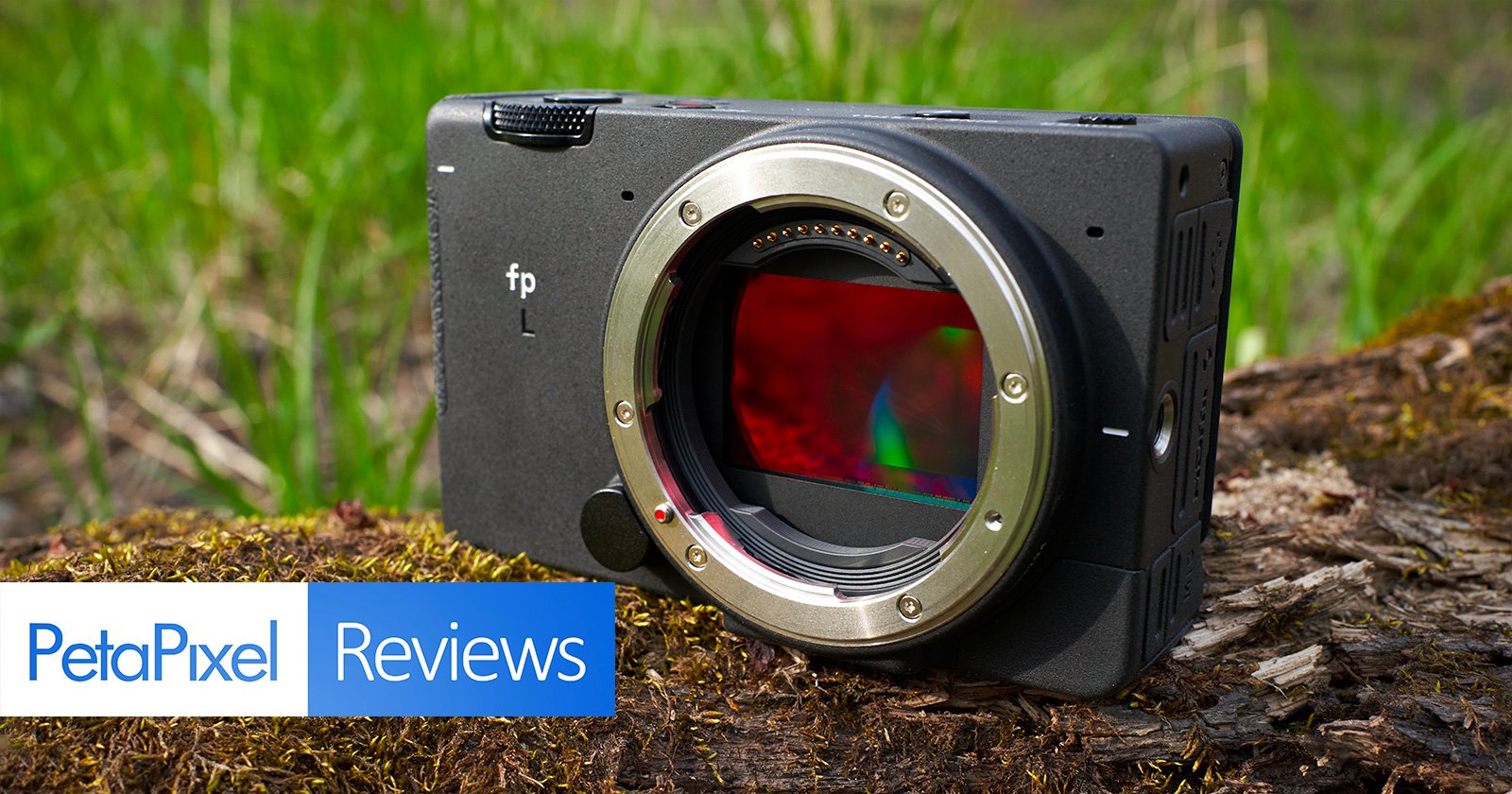 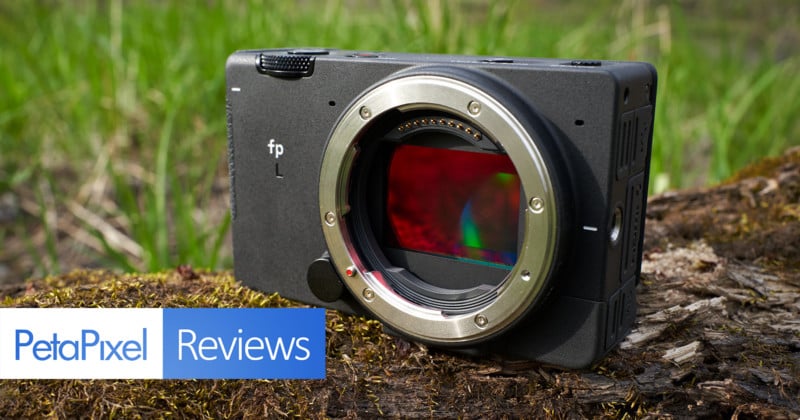 Making cameras is a tough gig. Every release demands to stand out from the crowd in some way. For the Sigma fp L, it’s turning heads by the remarkably compact size and resolution-dense full-frame sensor. Is it enough?

The Sigma fp L is barely wider than the lenses that get attached to it and sports a whopping 61-megapixel full-frame backside-illuminated sensor. It shares many of its other design aspects with the previous 24-megapixel fp model that debuted in 2019, and both have staked their claim as being the smallest and lightest full-frame cameras available today. With an increase of megapixels comes an increase in price, and the fp L is $800 more expensive at the time of publication: $2,500.

When I first unboxed the Sigma fp L, I was immediately surprised at how great it looked and felt. It’s a compact-sized camera, but unlike any other small camera I’ve used, there’s some heft-to-size ratio happening which triggers my caveman brain into thinking it feels high quality. All the materials feel really nice as well, including the matte finish and the faux leather on the grip side. Almost all the buttons and switches have satisfying clicks, and the top dial has just the right amount of tension. There are two exceptions with the review unit I borrowed: the rear dial is a little sloppy for my taste and the down button on this dial feels notably softer than the other directions and doesn’t have a pronounced click. 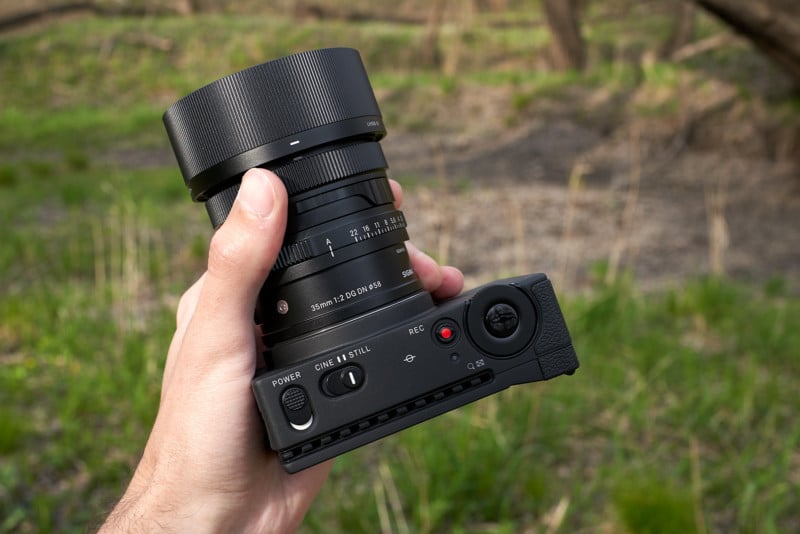 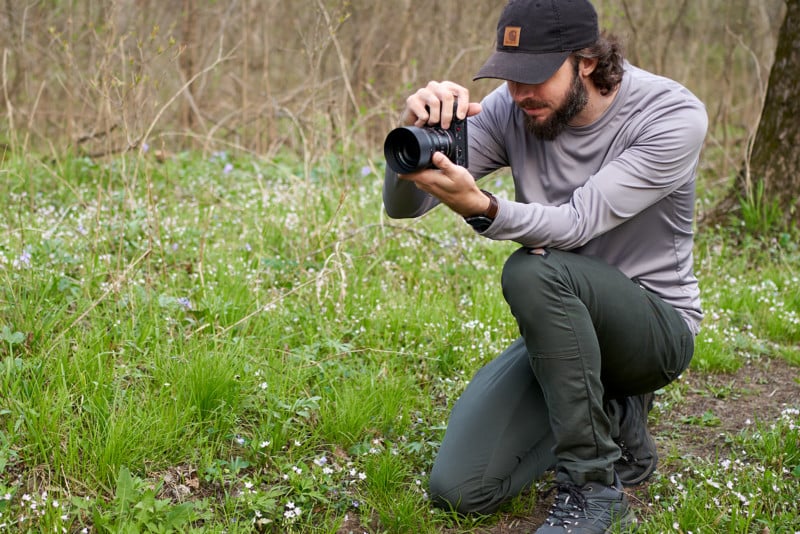 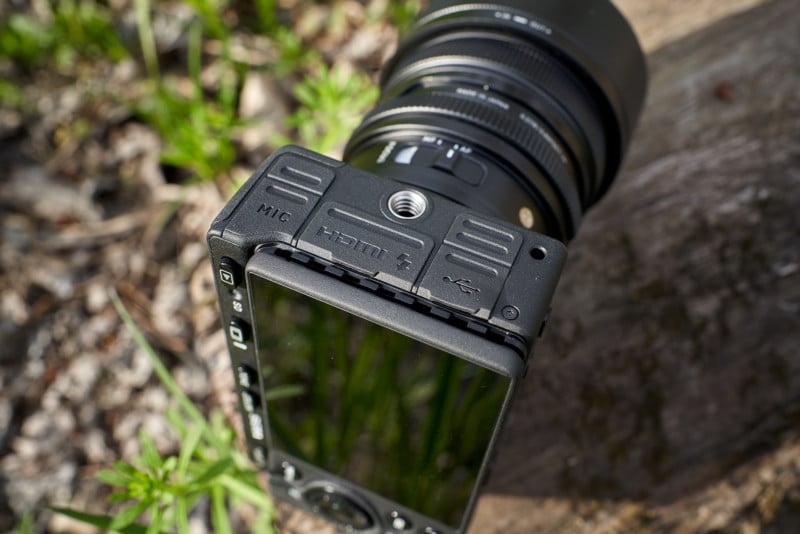 Two omissions in the design would go on to annoy me almost every day of shooting, and that’s having no multi-controller joystick on the back and no tilting rear screen. Without a multi-controller, moving the focus point takes extra steps. To do so, you need to press down, press AEL, move the focus point around with the D-pad buttons, then press the center button or half-press the shutter to exit. Yes, you can use the touchscreen, but like any other touchscreen found on cameras, it’s imprecise and only applicable to slow-paced shooting situations.

Having no tilting rear screen is self-explanatory in why that’s frustrating. I’ll tell you, in practice, it’s as bad of an idea as it sounds. I’m flipping up and down my screen all the time on other cameras if I’m not using the viewfinder. It does make me question what Sigma’s motivation was here. Did the designers really mean to sacrifice something so obviously useful and commonplace just so the company’s marketing materials could say it’s the smallest full-frame interchangeable lens camera? At what length were these sacrifices made just to make the claim? 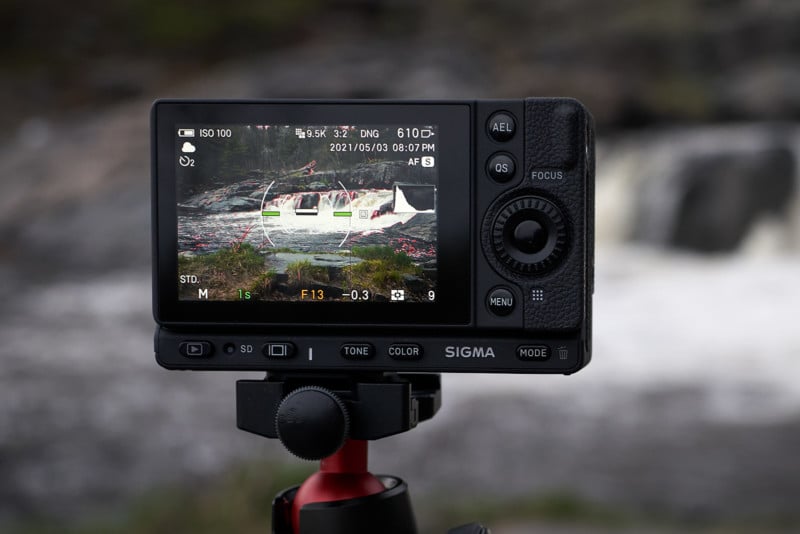 What sucks most about the Sigma fp L is that when feeling the weight, the materials, and the shape in your hands, all your senses tell you you’re are holding onto a special camera. Seeing how the modular pieces come together like the EVF-11 or HG-11 Hand Grip is really interesting and a finely executed concept. But then you turn it on.

The Sigma fp L supposedly has an upgraded autofocus system from the original fp which now includes 49 phase-detect autofocus points in addition to just the contrast-detection. I say “supposedly” because in practice, the Sigma fp L’s autofocusing is atrocious.

For moving subjects or non-moving subjects, AF-C is near unusable, and the quicker you learn that the quicker you can just use manual focus or AF-S and stop completely missing shots. As a bird photographer and someone who lives in 2021, I use AF-C on my cameras full-time. With the Sigma fp L, AF-C should not be an option because of its gross inaccuracy.

This leads to another issue: all the single-point focus area sizes — small, medium, and large — seem to act exactly the same. Each of them easily dismisses subjects in the foreground and time after time after time will simply focus on the background. It’s a little better when using the multi-point areas, but those require the subject to be a sizable portion of the frame with prominent isolation or it can be overlooked. Other than prioritizing “focus” or “release” with the autofocus, there’s no way to customize the tracking sensitivity and how much grab it has on objects.

In AF-S focus mode, things become more reliable but at the cost of not being able to keep up to date focusing if you or your subject move. Sure, this is how photography was done for a long time before AF-C more recently overcame its struggles, but this is a brand new camera and I expect much better.

One thing this camera does right and deserves acknowledgment for is showing the focus peaking in autofocus. I wish all cameras did this.

With no mechanical shutter built into the camera body, the Sigma fp L depends on the electronic shutter’s readout speed being fast enough to combat rolling shutter effects.

It fails at this spectacularly.

I have never seen a camera with this bad of a “jello” effect, ever. Even while handholding the camera with a wider 35mm lens and not panning or tilting to follow a subject, I can see each individual frame in a continuous burst look slightly different from the next as everything slightly warps just from the natural hand movement.

Once I started taking frames with the camera picking up a subject though, it’s truly game over as everything in the frame begins to slant heavily. It doesn’t stop there, because if the subject itself is moving and the camera is still, it can become detached from itself and produce some very weird effects.

With slow readout speeds and poor autofocus performance, I would not recommend anyone get the fp L for any type of action photography.

The battery life can be looked at in one of two ways. Either it’s good that the 61-megapixel camera seems to press out a couple of hours worth of photography time for the smaller size of BP-51 battery it’s using, or it’s bad if you just look at the time the camera can stay active and compare that to the field. I had two batteries to use with the Sigma fp L and that regularly would give me around three hours of photography if I was mindful of saving battery where I could by turning the camera off.

One killer that could be addressed is the fact that when paired with a lens that features optical image stabilization, that stabilization never turns off unless the camera is off or it’s disabled on the lens. That means if I’m just walking around with the camera to my side, it’s going to crazy trying to stabilize all that movement all the time non-stop. Other cameras I’ve used will only power on the lens stabilization when the shutter is half-pressed and then turn itself off after 5 seconds or so of inactivity. 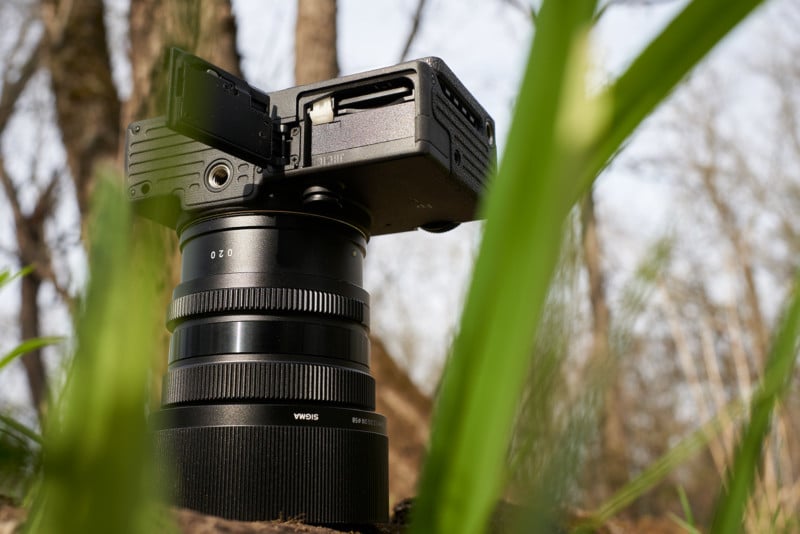 Another unfortunate quirk that popped out to me while using the camera was that after you shoot a photo, the leveling gauge and histogram will disappear until the buffer clears. Even with one RAW shot onto a UHS-II compatible card, this takes about 2.5 seconds to regain the monitoring.

While the Sigma fp L appears to be a letdown in many areas, one thing is clear to me and that’s in the end the sensor does produce some stunning images. The tonality of light, colors, dynamic range, and sheer megapixels to work with are all superb.

Working with the images in post-processing is a piece of cake as they can withstand lots of rough pushing and pulling. In tough lighting situations, such as strong contrast or the sun in the frame, there are smooth gradations and things don’t easily get jagged and clipped. There’s enough dynamic range to expose for highlights and recover the detailed shadows without becoming overly muddy.

Congratulations on Being Small, I Guess

All things considered, where the Sigma fp L slots into best would probably be landscape and travel photography. Anything that takes pressure away from autofocus and movement of the camera greatly increases the joy of using it. When I was going around with this camera photographing flowering plants or scenic views or self-portrait travel-esque stuff, it really wasn’t so bad, and the resulting images look great coming off the sensor. And if I really were away traveling, the small size is obviously a big plus.

More often than not though, some annoyance would creep into the day and if I owned the setup it wouldn’t take long for me to wonder if I made a mistake in not getting something else. That’s not somewhere your head should be after dropping $2,500.

As far as having a high-resolution full-frame sensor inside an interchangeable lens camera that’s this tiny, there’s nothing else that compares on the market. That being said, if you’re interested in the Sigma fp L it’s probably a good bet that the size is a big draw. For that, I can think of two other cameras to look at, however, each has greatly reduced megapixels.

The most obvious would be the Sigma fp. This camera launched in late 2019 and shares many aspects of design and functionality in common with the new fp L. The Sigma fp has a lower count 24-megapixel sensor and only contrast-detect autofocus among other subtler differences, but it is less expensive. For the right person, it’s possible the fp and fp L share the exact same features that are most valued.

The other option comes from Sony, where the company has released its own compact full-frame interchangeable lens camera since the original Sigma fp debuted. The Sony a7C is also down to 24 megapixels, but it’s also the smallest full-frame camera with in-body image stabilization — something the Sigma fp L lacks. For better or worse, it also uses the E-mount, which brings on a totally different set of compatible lenses. 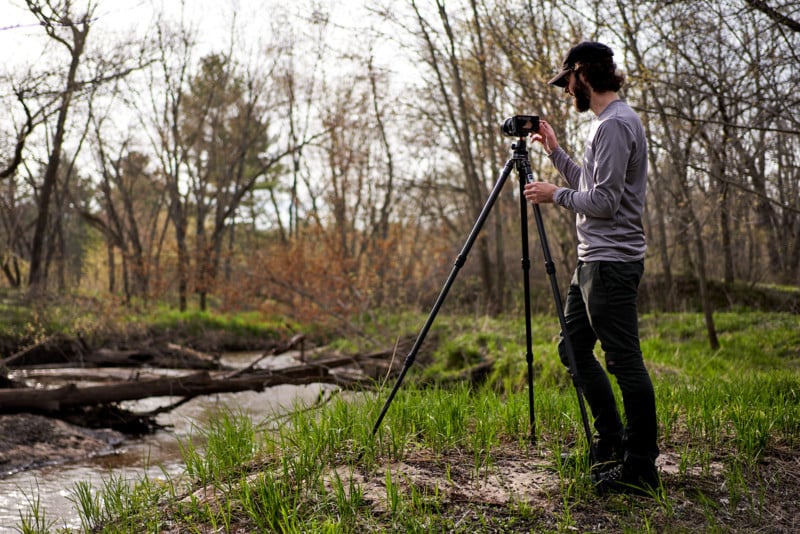 No. As stated above, the Sigma fp L is a truly unique camera with no real alternatives at the time of publication. If no concessions can be made — for example, your camera must be L-mount, it must be this small, it must be full frame, it must be 61 megapixels, and the actual performance of anything is secondary — then there is nothing else to discuss. However, after using the camera for a couple of weeks I believe the answer to be no. Any leeway you have in finding your next camera that’s kind of like the Sigma fp L in a few ways but not all is going to get you further with your money.

The Sigma fp L is flawed, but it’s not entirely a bad camera. There are aspects that I truly enjoyed about it, and for certain genres of photography like landscapes, it’s just a couple of features away from being excellent. If I were a pure landscape photographer and this was the only camera that existed, it wouldn’t be such a bad life. But this isn’t the only camera, and the other options out there that are more well-rounded in design and performance make the Sigma fp L hard to recommend.