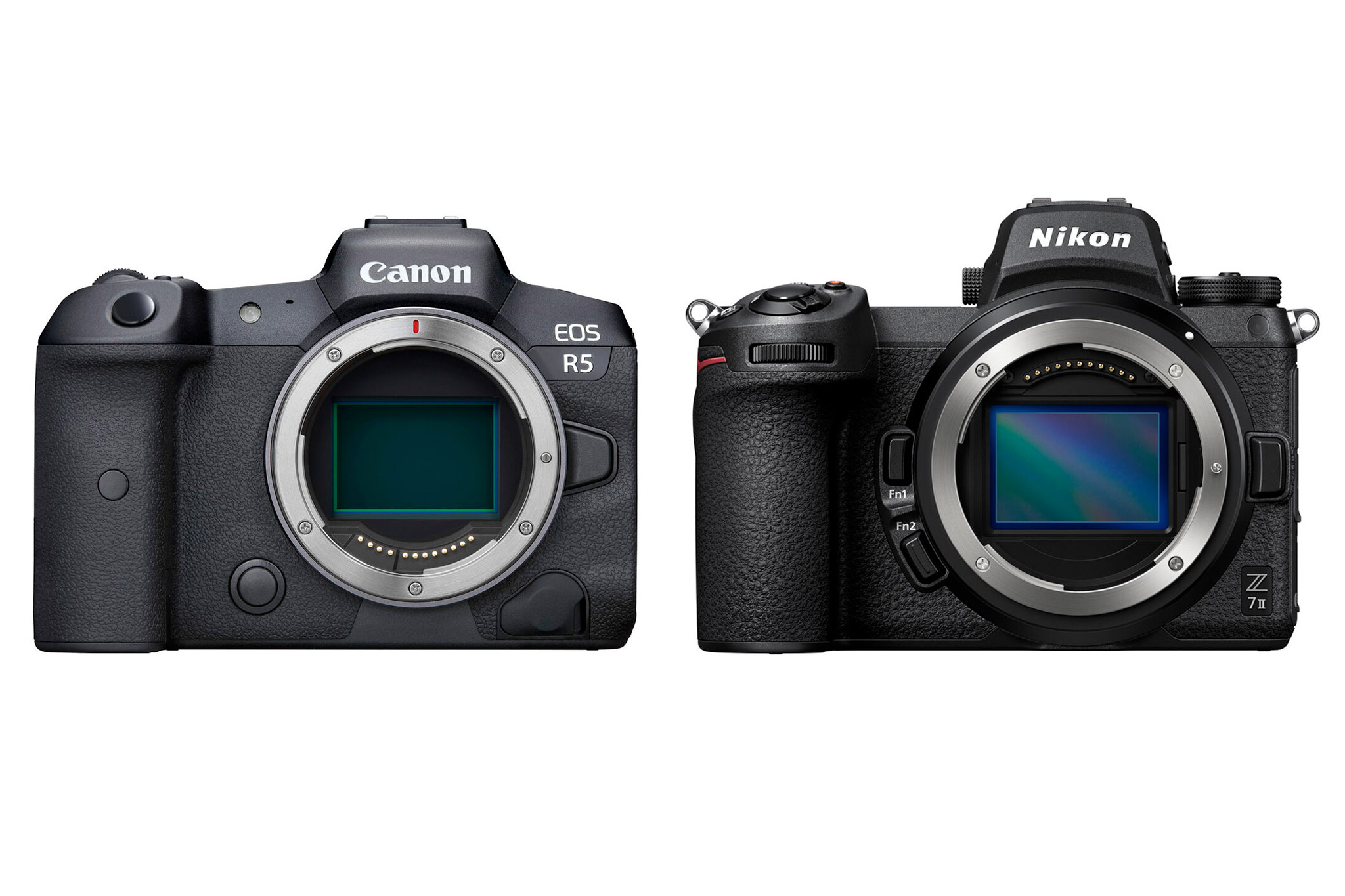 Two of the top mirrorless cameras on the market today are the Canon EOS R5 and the Nikon Z7 II. In this article, we’ll compare these two high-resolution, feature-packed cameras to help you figure out which one is right for you.

Both the Canon EOS R5 and the Nikon Z7 II are targeted at photographers who need a high resolution camera, with the EOS R5 offering 45 megapixels and the Z7 II offering 45.7. However, the biggest difference is that the Canon camera is also meant for high-speed action photography, and that comes at a higher price – $3900 versus $3000. I’ll get to the specifications in a moment, so you can see why the Canon EOS R5 is geared more toward action photography. For now, let’s look at the build quality and appearance of the two cameras.

Here’s how the front of the EOS R5 and Nikon Z7 II look:

Most of the controls for both cameras are on the back and top, so let’s take a look at those.

For starters, the rear control layouts certainly have their differences in some specific button placement, but the two cameras have a similar high-end layout overall. Both have a joystick and a dedicated AF-ON button, and most controls are on the right-hand side:

The top panels are also reasonably similar, although you can see that Canon uses a Mode button while Nikon chose a standard PSAM dial:

Although these different control layouts are important, and existing Canon or Nikon users will probably have a preference, the biggest differences between the Canon EOS R5 and Nikon Z7 II lie beneath the surface. So, let’s take a look at the specifications of these two cameras:

Although both cameras have their strengths, it should be clear from these specifications why the Canon EOS R5 costs $900 more than the Nikon. It all has to do with processing large amounts of data.

The Canon EOS R5 can shoot a remarkable 20 FPS despite its 45 megapixel sensor, while the Nikon Z7 II is capable of 10 FPS by comparison. Although 10 FPS is still very respectable (and more than enough for most applications), it’s pretty remarkable that the EOS R5 manages to shoot twice as fast. Even more important for many sports and wildlife photographers is buffer capacity – the number of photos that can be taken as a high-speed burst before the camera slows down or stops. The EOS R5 has a massive buffer of 180 images, while the Nikon Z7 II has a 77-image buffer by comparison – still good, but less than half of Canon’s. Given that both cameras have essentially the same resolution, it’s pretty remarkable how much more data Canon can push through the imaging pipeline to allow these FPS and buffer numbers.

None of that matters if you don’t need to shoot fast action in the first place, of course. Landscape and architectural photographers may be scratching their heads wondering why anyone would need 20 FPS and a 180 image buffer. But if you want to capture high-resolution wildlife or sports photography without missing a beat, the EOS R5 is very well suited to the task. The Nikon Z7 II, though certainly not bad at it, is certainly farther behind.

In terms of autofocus, both cameras do an excellent job focusing on static subjects, and their low light focusing performance is comparable. The same is true if a person’s face or animal’s eye is visible in the frame; the EOS R5 and Z7 II can track eyes with fantastic speed and accuracy. However, in terms of more generic subject tracking – things like birds in flight or airshows – the Canon EOS R5 is a clear step ahead of the Nikon Z7 II. While the Z7 II has a solid and capable autofocus system overall, it is not geared toward tracking erratic and quick subjects as well as the EOS R5 is.

Video shooters will also most likely prefer the features of the Canon EOS R5, which can shoot 8K video – far more than 4K. (Each frame in 8K DCI video is 35.4 megapixels, while each frame in standard 4K video is “only” 8.3 megapixels.) Even if you don’t need to shoot 8K, the Canon EOS R5 can also shoot 120 FPS slow motion 4K video, while the Nikon Z7 II maxes out at 60 FPS slow motion 4K. The Nikon Z7 II is no slouch in the video department, but it’s hard to compete with features like 8K or 4K 120p.

Although the Nikon Z7 II has a few nice features that the Canon lacks, there are only two big ones: base ISO 64 and price. At base ISO, the Nikon Z7 II has a better dynamic range than the Canon EOS R5 by about 2/3 of a stop, which could matter for some landscape photographers in high-contrast scenes. But the biggest benefit of the Z7 II is simply that it costs $900 less than the Canon EOS R5, at least at the time of launch. For that price, you could buy one of Nikon’s excellent Z-series primes or upgrade your tripod, either of which will improve your baseline image quality more than getting the Canon EOS R5.

If image quality is your baseline, the two cameras are practically identical. There’s the base ISO 64 benefit of the Nikon Z7 II, but once you get into the shared ISO range, the two cameras are neck and neck. So, for low light photography at high ISOs, you won’t get cleaner images either way; instead, it’s down to the maximum aperture of your lens.

The Canon EOS R5 can push at least twice as much data through the imaging pipeline per second as the Nikon Z7 II, both for stills and video. That’s the main reason the R5 costs $900 more, although the more advanced autofocus tracking system also plays a role.

Not all photographers need those features, and if you don’t, there isn’t much difference between the Canon EOS R5 and Nikon Z7 II. Sure, they trade blows with various specifications here and there, and they obviously have their company’s own handling styles, but they’re as comparable as a Nikon and Canon ever are.

My recommendation is to stick with whatever company you’re already familiar with, whether Canon or Nikon. Jumping ship to another brand is usually not a good idea unless you’re prepared to spend a lot of money, considering the fact that camera companies leapfrog each other all the time. The EOS R5 is ahead of the Nikon Z7 II, but Nikon has undoubtedly taken note and will try to make its next iteration even more competitive. And so it goes.

If you’re not tied to either company, I recommend the Nikon Z7 II for landscape photography simply because of the lower price, and also because the EOS R5’s benefits don’t really matter for most types of landscape photos. On the other hand, the EOS R5 gets my recommendation if you want to photograph wildlife or sports at high resolutions instead, or alongside landscapes. (If you don’t need these extreme resolutions, but you want the high FPS and tracking capabilities, you may find the Canon EOS R6 to be a better fit.) If price is no object, go for the EOS R5, since it can do some things the Nikon Z7 II cannot, while the opposite isn’t really true.

Personally, I’m still happy with my old Nikon Z7 and don’t mind stepping off the upgrade train for now. It’s always fun to use a new camera, but my recommendation at the end of the day is to stick with whatever you have until you find yourself really pushing its limits, so that you can learn and grow from one camera setup as long as possible. It’s better to know an old camera with your eyes closed than to buy the EOS R5 simply because it’s the latest and greatest sub-$6000 camera on the market.

That said, it is the latest and greatest sub-$6000 camera on the market 🙂

I hope you found this article useful, and if you want to see more comparisons between these two cameras with others out there, you may find these links helpful:

You can also read our full review of each of the EOS R5 and Z7 II here: