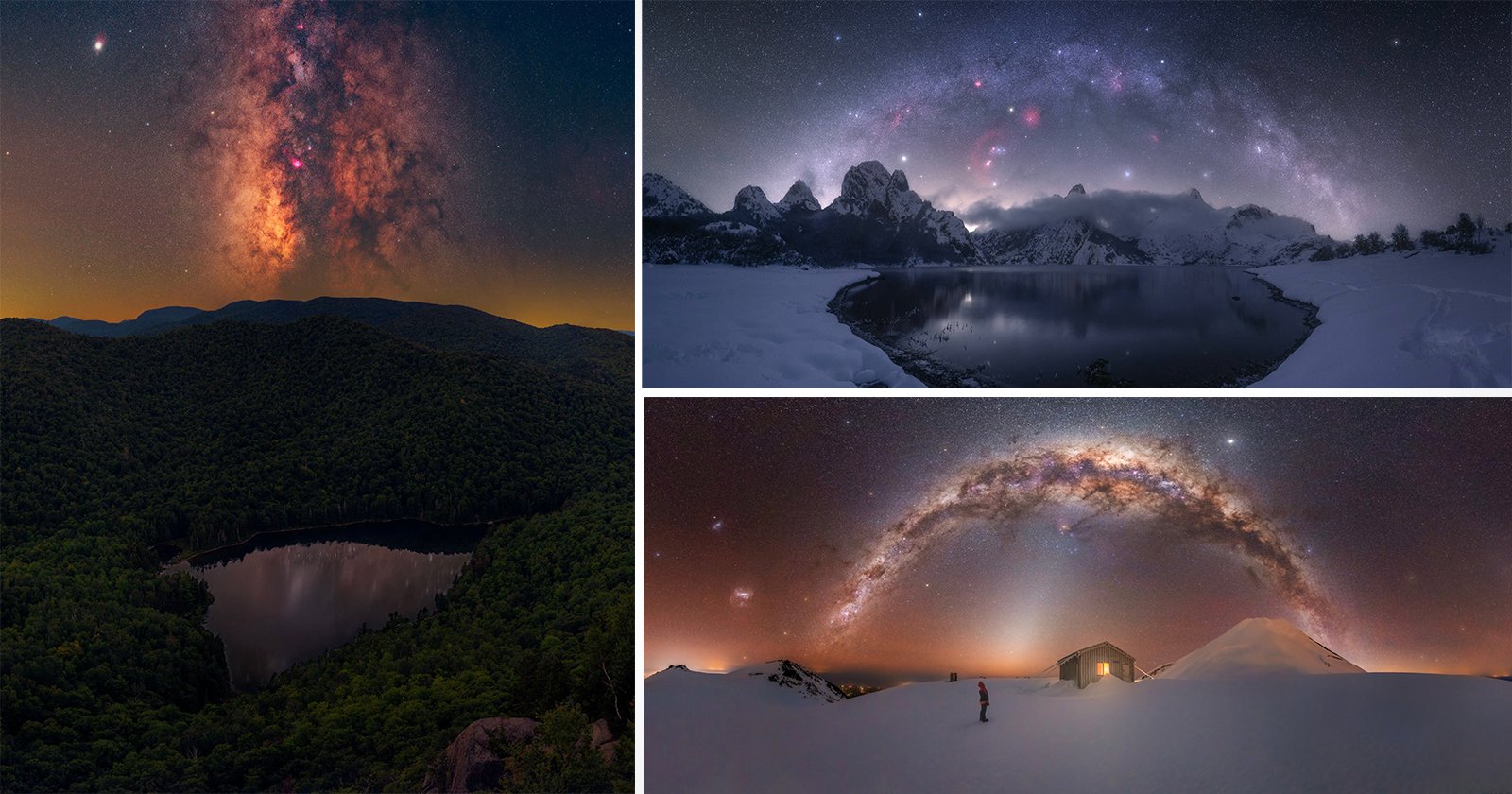 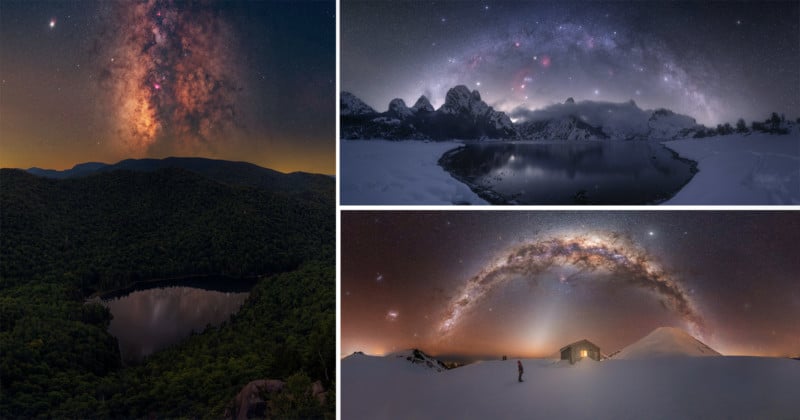 Travel and adventure photography blog Capture the Atlas has released the results of its annual Milky Way Photographer of the Year, a collection of 25 stunning photos showcase the night sky from locations all over the world.

This compilation is published in the spring of each year which is considered the peak of the Milky Way season, with a simple goal of inspiring others and sharing the beauty of our galaxy. There are no overall winners or runners-up in this challenge, instead, Capture the Atlas equally highlights 25 of the best and most inspiring images of the Milky Way from around the world.

This year’s list features images captured in 12 countries like the United States, Australia, New Zealand, Chile, Iran, Turkey, Brazil, Spain, Italy, Slovenia, Switzerland, and Greece by 25 photographers of 14 different nationalities. The main factors for selecting these images each year are the quality of the image, the story behind the shot, and the overall inspiration that the photograph can provide.

Below are 10 of the inspiring images from this year’s selections with the stories of each as told by the photographers that captured them:

“I captured this image last winter in the Riaño Mountain Reservoir in Spain. The biggest difficulty that night was mainly the cold; it was over -10 degrees. The moisture in the reservoir was freezing the lens and it was difficult to shoot for a long period of time.

“I planned the photograph using PhotoPills and, when the weather forecast was promising, I decided to try for it. The composition of the winter Milky Way over the mountains and the reservoir created magical scenery.”

“Temple Of The Sun” – Bryony Richards

“The Milky Way core rises before dawn under the southern skies of Capitol Reef National Park’s ‘Temple of the Sun.’ This area of the Colorado Plateau Desert, known for its domes, hoodoos, fins, reefs, natural bridges, and slot canyons, includes the Temples of the Sun and Moon.

“These Jurassic-aged sandstone monoliths, which formed as sandy mud on a tidal flat, tower above the otherwise flat desert floor. It seems like more than a coincidence that the Temples line up perfectly with the Milky Way, their vibrant orange colors seemingly reflecting the color of the stars above.”

“This is my favorite nightscape image to date. Mungo is a 12-hour drive away from my home in Sydney, but those Bortle 1 skies are the best I’ve ever witnessed and photographed at night. I had perfect conditions for three straight nights, with really good seeing throughout.

“The moment I came upon this scene, I knew exactly what I wanted to name the image. It was otherworldly – think Game of Thrones – and it lined up perfectly for how I wanted to capture it. Large, jagged walls framed a winding path leading to a centered spire to the west. There was only ever going to be one way to do it justice and that was as a multi-layered Milky Way panorama.

“I planned this image using PhotoPills during the day, but in post-processing, I decided to use the blue-hour blend for the foreground with a tracked sky for the cleanest possible image.”

“Photographing Iguazu Falls at night has always been one of my priority projects. In order to do so, I needed to obtain special authorization from the environmental agency that is responsible for national parks in Brazil.

“Finally, in early 2021, I got this authorization and set out to put my plan into practice. I spent 4 days inside the Iguazu National Park with exclusive access to the Falls at night for my students and me. The first challenge was to walk around the park at night knowing that several jaguars live there, which are frequently seen by employees and tourists.

“In the area closest to the main waterfalls, the big challenge was to make long exposure images with the strong water spray from the more than 1.5 million liters per second that fall through the waterfalls. Working with exposure times longer than 10 or 15 seconds became an almost impossible task and the lens was never dry.

“In this image, we have one of the main waterfalls of the Iguazu Falls complex, the “Santa Maria Jump.” Right over the fall, we can see Saturn and the zodiacal light illuminating the horizon. Further up there is the Milky Way Core. We can also identify some of the main emission nebulae present in this region of the sky.”

“If you’ve never seen the Southern Sky, it’s significantly different and truly amazing. In the Northern Hemisphere, we use Polaris as the polar star, but below the equator, there are other rules. To easily recognize the south celestial pole, the best indicator is the Southern Cross constellation, located in the image just above the Villarrica volcano.

“This cross points to the south celestial pole and it’s easy to identify, considering the brightness of the stars. Within the cross, we can see the dark area called “the Coalsack,” which is also visible to the naked eye. It’s one of the best-known dark nebulae in the sky.

“In the upper left corner, there’s another night sky gem: the red-colored Carina Nebula. This is also only visible in the Southern Hemisphere and, even though it’s visible to the naked eye, with a pair of binoculars, we can see all the beautiful details.”

“The deserts of the Southwest are abounding with places to capture the night sky. With all that the Southwest has to offer, it’s easy to overlook some of the more obscure hidden gems hovering under the radar.

“This is one such location, which is situated below a remote set of cliffs in Grand Staircase-Escalante. Due to its remoteness, this natural stone chamber provides some of the clearest, most pristine views of the Milky Way framed by the copper-colored opening of the cavern.”

“This is one of the most challenging shots I have ever captured, as it required climbing for 4 hours in 70km/h winds to reach the ice summit of Fanthams Peak – a volcano on the side of Mt Taranaki. At an elevation of 2000 m and -15ºC outside with gusty wind blasts, I had to choose settings that would get me the capture rather than what I may have considered more ideal settings.

“I am so stoked to have captured what I did under perfectly clear skies, as it was both a true test of both mountaineering and endurance carrying all my gear to this location, but one I will look back on with pride and success.”

“This incredible location has always amazed me, even before I had any interest in photography. This set of rocks, carved by the incessant churning of the sea and the powerful wind that whips the south coast of Victoria is, without a doubt, the most emblematic landscape of Australia.

“After an amazing sunset followed by an ethereal moonset, I was standing there, contemplating the spot I had always dreamt of under a magical starry sky. However, not everything was pink that night… I had brought a new piece of equipment with me, a star tracker, and as soon I started to set it up, I knew it was going to be a tricky night. After numerous failed attempts to align it towards the south celestial pole, I was ready to give up, but I decided to take a shot and “see what happens” while the galactic core was rising up. Surprisingly, it worked out nicely, and a door opened for me, to a new magical world full of stars.”

“The East Coast is less commonly known for Milky Way photography due to its condensed population and, as a result, intense light pollution. However, there are still a few dark skies remaining…

“Tucked away in upstate NY, the Adirondacks region consists of 6 million acres of land designated as “Forever Wild.” It is home to some of the last known darkest skies on the East Coast. I feel like I am home when I am hiking in the Adirondacks. This shot, then, captures the magic which I feel fills my heart when I am there. Not only does it consist of a lake that seems to take the formation of a heart itself, but it also shows just how much the East Coast has to offer: beautiful woodlands combined with still water and rolling hills. My heart is in these mountains, and I am so thankful to be able to explore them.

“With that in mind, these mountains are constantly being swarmed with light pollution. The yellow glow on the horizon is light pollution from within the region as well as way off in the distance. My goal is to attempt to use my photography to raise awareness about the issue and restore the night. Remember: if you plan to visit the region, please read up on all current regulations, and leave no trace on site.”

“I spent the pandemic in a remote valley on the southwest coast of Turkey trying to avoid the chaos of restrictions and lockdowns and be surrounded by beautiful nature instead. Sadly, the valley I was residing in has very steep walls and only a clear view west, but, as the Milky Way core rises in the southeast at this time of year, I had to hike up over the mountains to get a good view.

“The path to get to this location is part of the Lycian Way, a popular multi-day hiking trail along the incredibly beautiful coastline of Turkey. The view overlooks a beach known as “Cennet,” which, translated from Turkish, means “Paradise,” a name I completely agree with!

“Sitting on the mountainside enjoying this view of the Milky Way arching across the mountains whilst listening to the sound of the waves breaking gently below and the owls twitting through the valleys was just the kind of peace and solitude I needed.”

To see all of this year’s winners, head over to Capture the Atlas. If you’re interested in getting into Milky Way photography for yourself, check out the publication’s guide to photographing the Milky Way, and this helpful Milky Way calendar from earlier this year.

Image credits: All photos credited individually and used courtesy of Capture the Atlas.

Shooting with the Canon EOS R3 for a Full Week
SmokeGENIE is a Powerful, Handheld, Non-Toxic Smoke Machine
How to choose your ideal Godox strobe in 2021
The photographer’s guide to shooting street fashion
Superzoom Cameras For The Trail