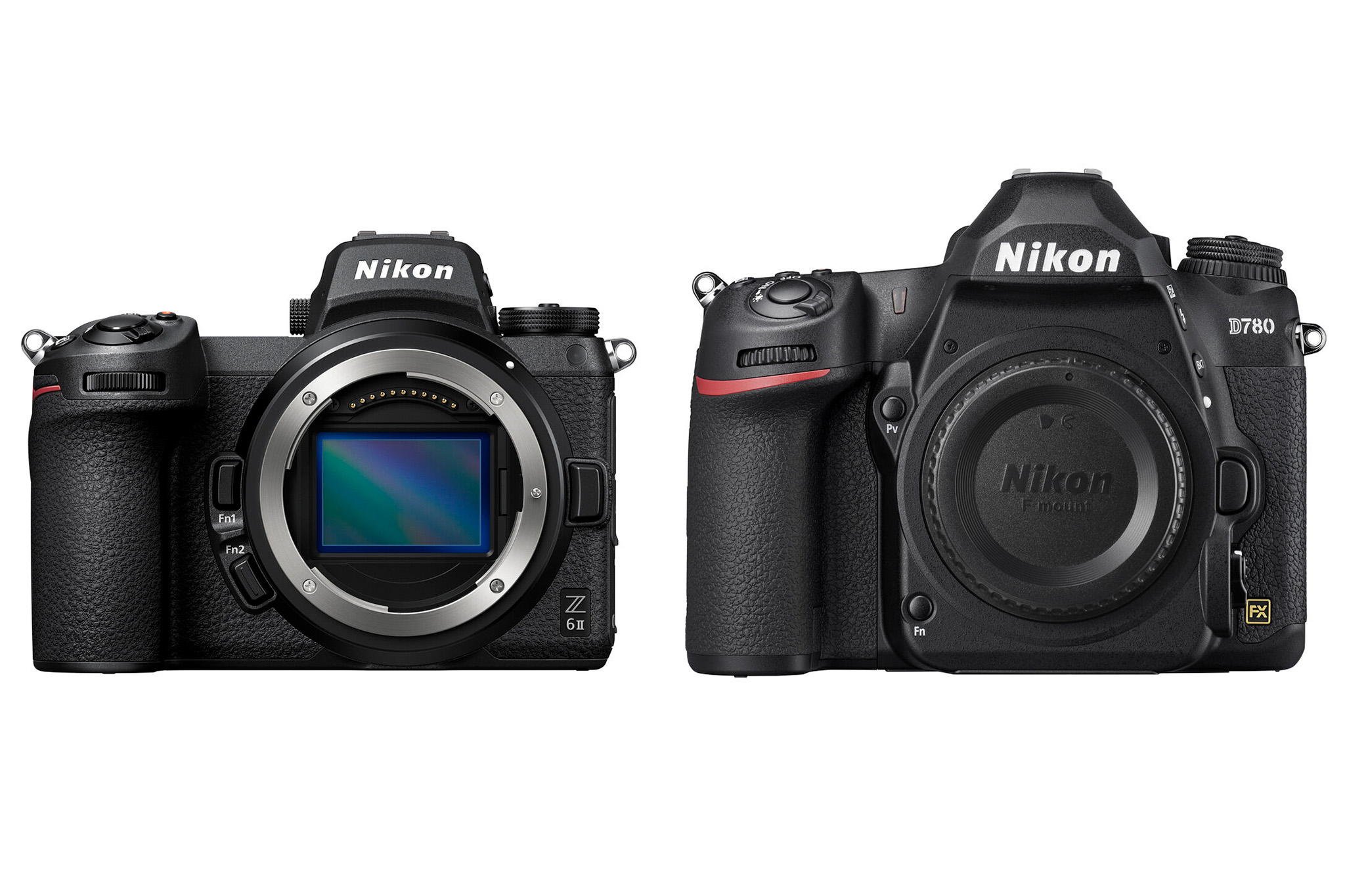 The Nikon Z6 II and Nikon D780 don’t look similar side by side. The Z6 II is a slim mirrorless camera, and the D780 – though not a huge for a DSLR – is still a DSLR. But beneath the surface, the two cameras have a lot in common.

In this article, I’m going to compare the Nikon Z6 II against the D780. We’ve tested these two cameras extensively here at Photography Life, both in the lab and in the field. So, if you’re considering either of them cameras, this article should help you figure out which one to get.

It’s also lighter at 705 grams (1.55 lbs) compared to 840 grams (1.85 lbs). These differences aren’t as extreme as some mirrorless/DSLR comparisons, like the Nikon Z7 II and the Nikon D850. But if you’re looking for a travel camera, the Z6 II starts off on the right foot.

Still, I’m getting ahead of myself. Before diving into the pros and cons of each camera, let’s first take a look at their specifications.

What strikes me the most is how similar these specifications are. Most of the differences are the usual pros and cons of mirrorless versus DSLR: weight, battery life, in-body image stabilization, viewfinder type, and so on. It’s hardly an exaggeration to say that the Nikon Z6 II is a “mirrorless D780,” and the D780 is a “DSLR Z6 II.”

While the Z6 II has a few more points in its column than the D780, that’s not always a sign of the better camera. For example, if you prioritize the D780’s long battery life or optical viewfinder, the advantage can start to shift toward the DSLR instead. Given how close most of these specifications are, the choice is definitely a dilemma.

Unfortunately, even if you ignore all the features above and just pay attention to image quality, the choice doesn’t get any easier. Both of these cameras use the same sensor and have indistinguishable image quality. They also cost the same (at least at the time I’m publishing this article), so you can’t just pick whichever is cheaper.

As I see it, there are two major advantages to the Nikon Z6 II and two for the Nikon D780. These are the differences that I would suggest basing your decision upon:

I’m not saying the other differences don’t matter, but for most photographers, those are the four things I would think about the most.

Which Camera Should You Get?

For wildlife and event photographers, I recommend the Nikon D780 because of the autofocus system and long battery life. For travel and landscape photographers, the Z6 II is the way to go thanks to the Z-Series lenses and the more portable form factor. Even for portrait photography, I lean toward the Nikon Z6 II; its eye-tracking autofocus system is amazing for photos of people, and you get the other mirrorless benefits like weight and in-body image stabilization along the way. (The D780 also has eye-tracking AF, but it’s only in live view and not through the viewfinder.)

If you’re a long-time Nikon shooter with a large lineup of native F-mount glass, I’d say to stick with DSLRs for a bit longer. The Nikon Z6 II works reasonably well with the FTZ adapter for adapting F-mount glass, but not as well as a DSLR like the D780. (Just to name one example, the FTZ adapter can’t be attached or removed when your camera is on a typical tripod head.) You may eventually decide to switch to mirrorless, but if you have a great F-mount lineup already, there’s no need to rush.

On the other hand, first-time Nikon photographers who aren’t sure should go with the Z6 II. Nikon – like most other camera companies – is clearly putting more effort into mirrorless than DSLRs these days. I have mixed feelings about that myself, but it’s hard to deny that’s the direction they’re going. I therefore recommend starting your Nikon journey with the camera system that Nikon is prioritizing rather than phasing out, all else equal.

Naturally, the Z6 II and D780 are both fantastic cameras, and you can’t go wrong either way. I know that I say something like that every time I write one of these comparison articles, but it’s true. Practically every modern DSLR and mirrorless camera is amazing, and they’re usually priced where they should be, too. That’s doubly true in the case of the Nikon Z6 II and Nikon D780, which are as similar as a mirrorless and DSLR can be. You’ll be able to take equally amazing photos with either camera, so pick whichever one sets your heart aflutter and don’t look back.