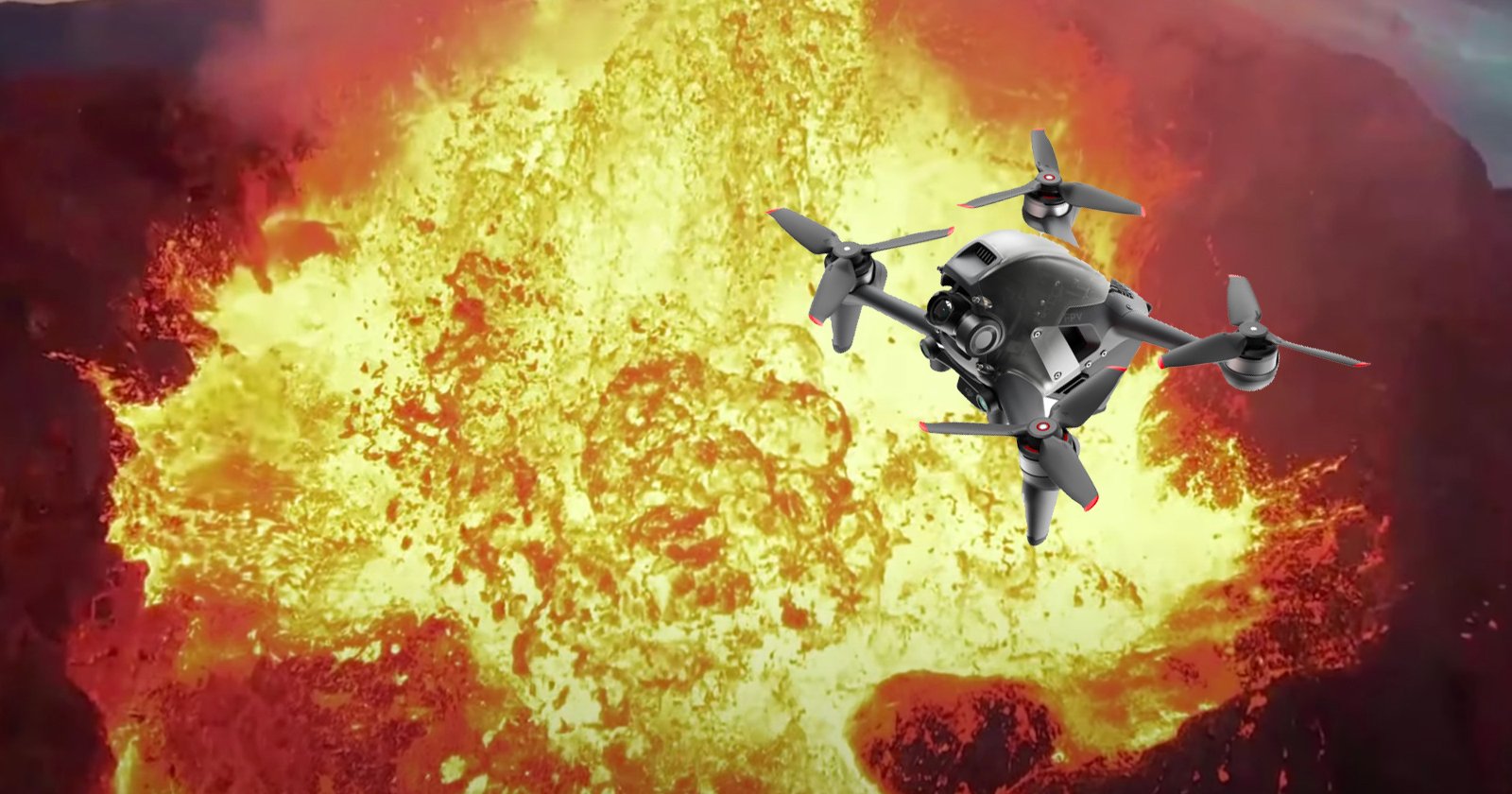 Photographer and filmmaker Joey Helms ventured to Iceland in order to capture footage of the volcanic eruption there. During a pass over the mouth of the volcano, his DJI FPV was swallowed by lava and lost forever.

As noted by Helms, first-person view drones — or FPV for short — are very much prone to crashes. Part of DJI’s pitch for its aptly-named FPV drone was that it was not only durable but would be supported with easily replaceable parts to address any crashes that would assuredly happen to even the most seasoned pilot as evidenced during PetaPixel’s own review of the DJI FPV drone. When a drone can fly at up to 87 miles per hour while also taking tight turns and performing aerial stunts, crashes are pretty much unavoidable.

“FPV drones are notorious for crashing, it is part of the hobby,” Helms says. “So in an effort to get a unique vantage point and perspective into the crater, we flew this remarkably capable drone as close to the lava river and caldera as possible. One of them turned out to be its very last flight. At least the goggles record a great 1080p image allowing us to actually capture the last seconds the drone saw.”

Helms says that thanks to the goggles’ separate recording functionality, he was able to share this unique footage of his drone’s final seconds. When asked if the intent was to lose the drone or if it was just an unfortunate lava spurt that sealed its fate, Helms was coy.

“I will leave that judgment to each individual viewer,” he says. “It has already led to interesting debates and even conspiracy theories. I call it ‘CGI-gate’ as some claim it is a computer animation.”

Helms does say that he did indeed lose his drone to the mouth of the volcano and also admits that he’s relatively new to first-person vies drone flights.

“I have gotten into FPV specifically with the DJI FPV and spent hours and hours in the simulator. I thought I would never be able to fly this beast fully manually (acro). But after hours of training and test flights, I am pretty happy with my abilities now,” he tells PetaPixel.

To prove it, Helms provided the following video that shows multiple other angles and shots that were clearly captured with the DJI FPV.

“I am actually not an entirely terrible drone pilot,” he laughs.

This is not the first drone to suffer damage from flying too close to the molten lava and is the second time a DJI drone filmed its own demise. Some drones only suffered damage and were not entirely lost. Earlier this year, a drone nearly melted while hovering over the mouth of the volcano while another DJI FPV was struck out of the sky by a chunk of flying debris.

Vaonis Launches the 1050mm, 61MP Hyperia Telescope Camera
7 ideas to take your Autumn landscape photos to the next level
Simple Way To Apply a Cinematic Color Grade in Photoshop!
Texture vs Clarity vs Dehaze | In a Lightroom minute
Apple Unhappy as the EU Proposes Mandatory USB-C on All Devices