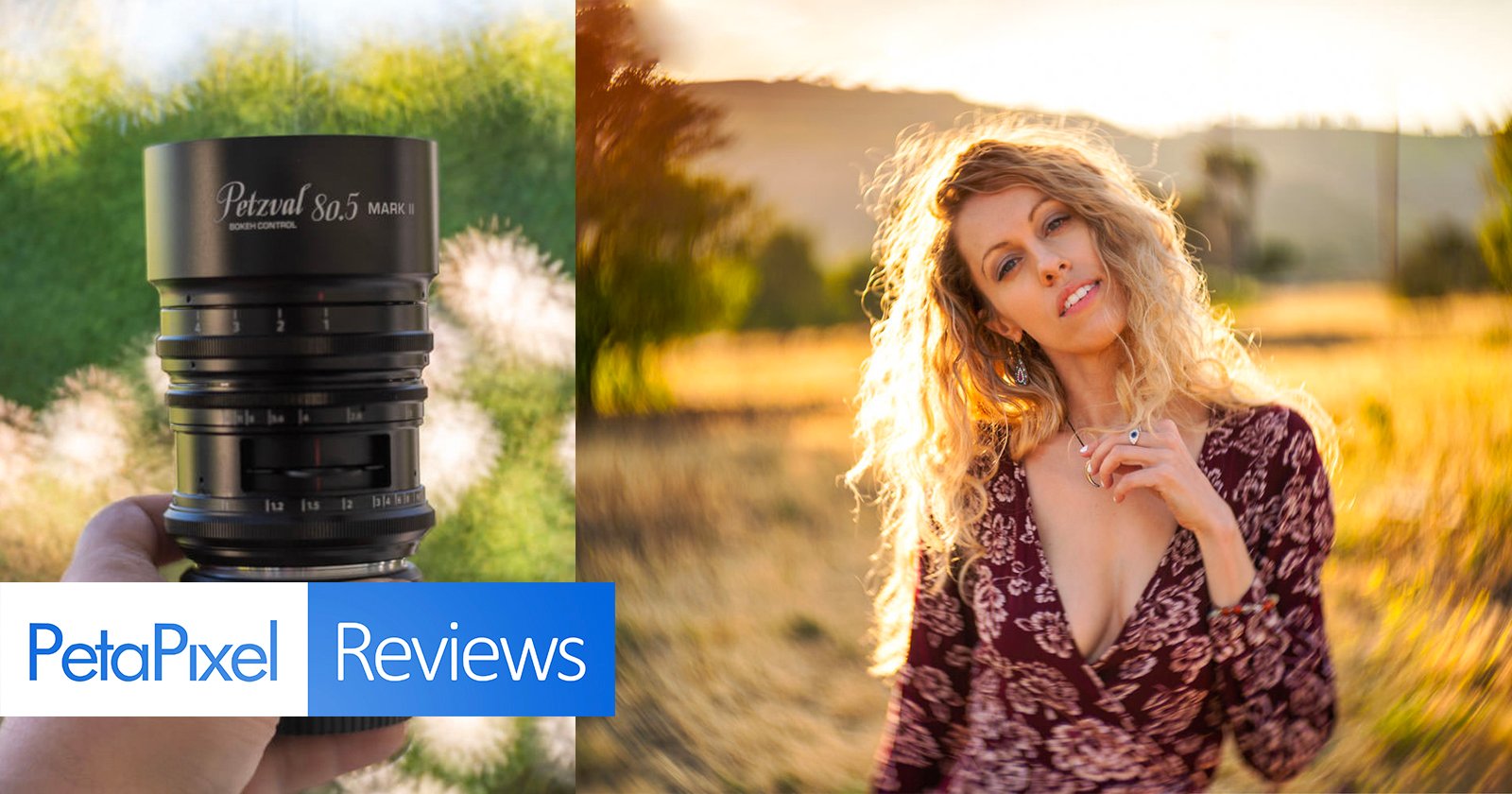 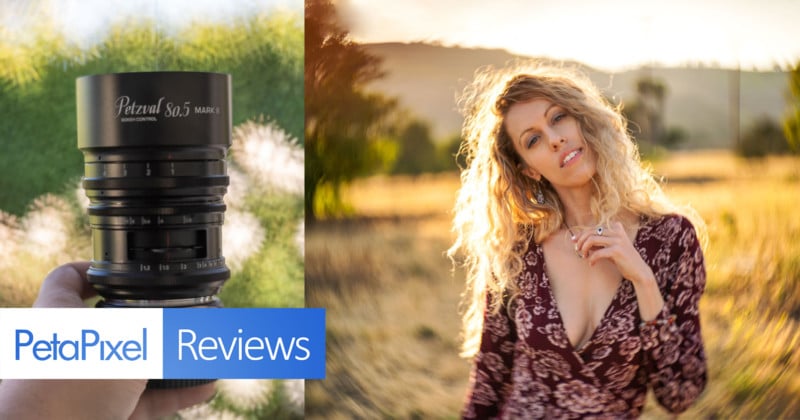 Just over a year ago, Lomography launched the 180th Anniversary Edition of the Petzval 80.5mm f/1.9 MKII Bokeh Control Art Lens which promised a bevy of improvements over its 85mm predecessor. It looked as though it would put a historic lens back in the hands in creatives at an affordable $549 price. So does it?

The 80.5mm f/1.9 MKII Art Lens with Bokeh Control was in development at Lomography for about seven years and is finally available for Nikon F and Canon EF mounts. While the “basic version” is available in three different colors, the bokeh control model that I reviewed here is only available in black aluminum.

Besides the color limitation, the real difference between the basic and this bokeh control version is the ability to control the amount of swirly bokeh effect in the images using the Bokeh Control Ring which goes from 1 (barely noticeable) to 7 (maximum bokeh). I do feel like making the scale go to eleven was a missed opportunity but, we can let that slide for now. 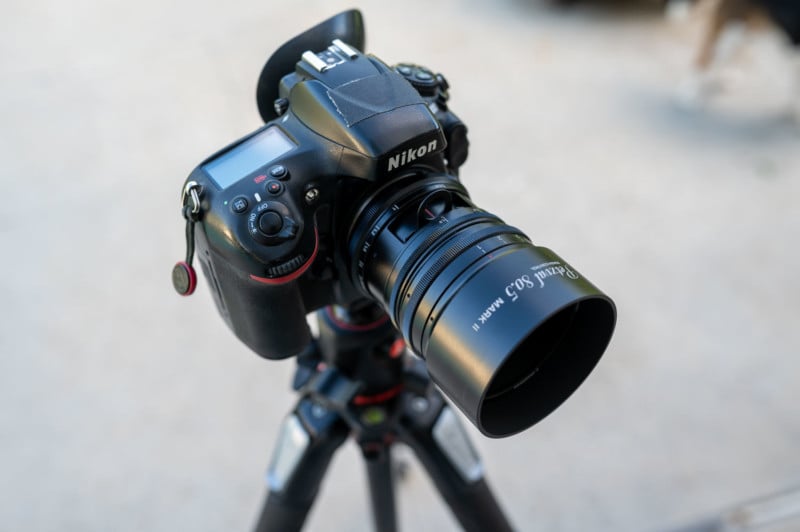 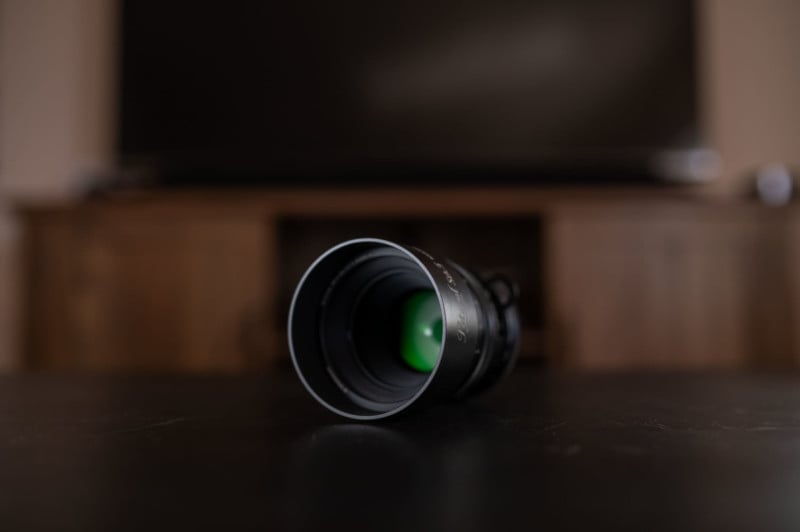 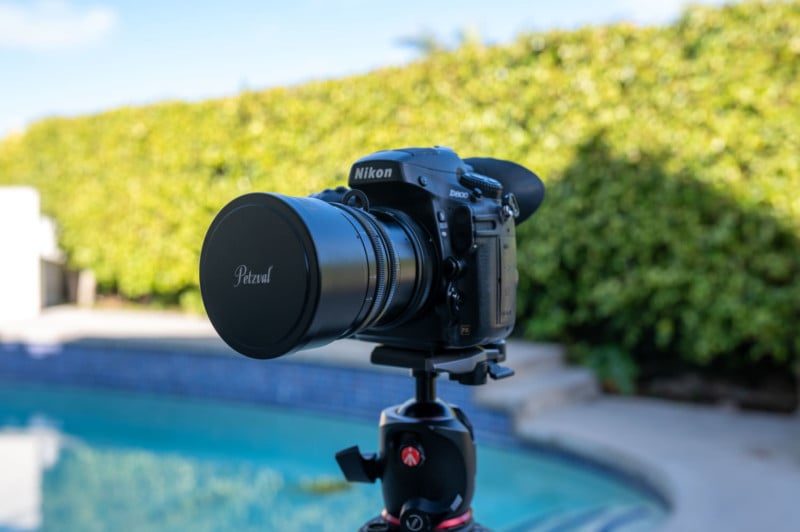 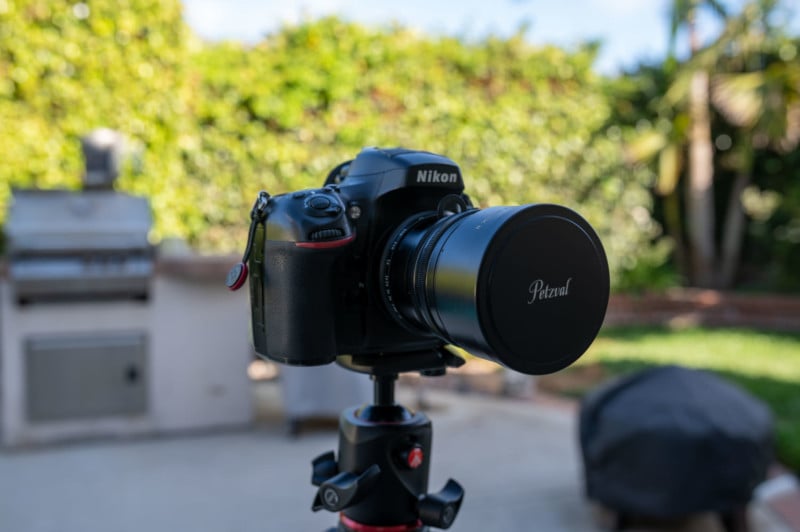 The original Petzval lenses from 1840 were previously only adaptable to large format cameras until Lomography started rebuilding them for digital systems in 2013. In doing so, the company sought to bring back the old “romantic” aesthetic from early portraits. Even though this particular lens was meant for the Nikon F mount, adapting it with the FTZ mount made it quick and easy to use on the Nikon Z mirrorless system without any issues.

Since the lens only weighs 440 grams, it is easy to balance on a gimbal which could make it quite a fun lens for videographers to use as well. For the purposes of this review, however, we’ll focus on the lens from the perspective of a still shooter. 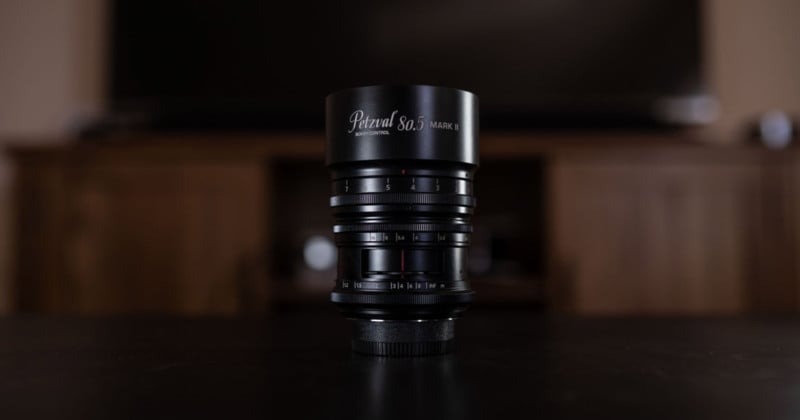 The 80.5mm Petzval lens doesn’t look all that different from any other manual lens aside from the built-in lens hood and the metal lens cap. It does have a couple of notable differences though: the bokeh control ring located at the end of the lens and the “slide plates” you can insert to change the shape of the bokeh, should you decide to go that extra step. 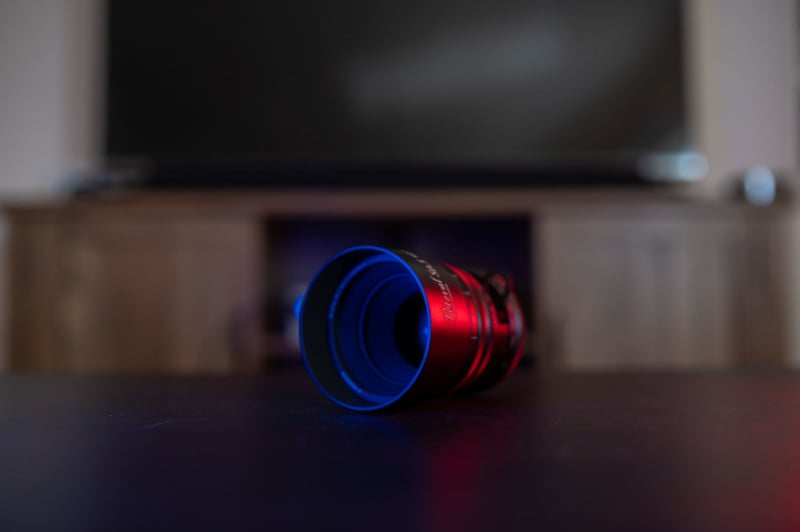 The focus, aperture, and bokeh rings each have a good amount of tension in them that I noticed when making adjustments, so you shouldn’t have to worry about any drifting due to gravity or positioning. However, since all three of these rings are the “clickless” style (meaning there is no noticeable click when you make changes), you should double-check your settings if you are about to take an important shot to make sure no ring has slipped.

I found that when I shot freehand it was easy to accidentally bump one of the three rings slightly while moving around. Outside of that cautionary moment, the lens handled well and overall felt great to shoot with. Aesthetically, the lens is rugged, too. Even the paint on the barrel of the lens and the lettering felt almost impossible to scuff up. It is clear that the team at Lomography took their time with the quality presentation and look of this lens.

Something that does concern me about the longevity of this optic though is the lack of weather sealing or protection. While the lens seems to be designed quite well, the fact that there is no mention of weather sealing on the official website and that lens has a drop-in bokeh pattern insert leads me to believe you should be extra cautious using this lens outside in the “elements” just to be sure no water gets inside of it.

It is also worth noting that the bokeh control version of this lens is unable to have an ND, polarizer, or any other threaded filter type mounted to it. In my testing, I didn’t have any need for it, but I can absolutely envision situations where an ND filter would come in handy. Maybe in the future, this could be something that could eventually be added into the drop-in section for the bokeh control.

The lens has an aperture range of f/1.9 to f/16 and each of those stops looks as expected from a quality standpoint. That said, with a lens like this it’s kind of hard to imagine why you would want to shoot it at anything more than wide open, as it detracts from the whole purpose of having it the more you close that aperture down.

When taking photos at f/4 or higher and with bokeh control at its minimum, it honestly looks like any other 80mm lens. When you are at f/3.5 and shallower, that’s when the true nature of the lens starts to shine. Still, I can see the advantage of a lens that has the ability to offer wildly unique visuals while also is able to transform into something more “normal.” It does add to the usability of the optic.

When you shoot wide open, you will be met with a soft focus and distorted vintage feel, which is likely the whole reason you would pick up something like this lens in the first place. With that in mind, be prepared to take a lot of extra shots to be sure you’ve nailed your focus as it can be easy to miss. That brings me to my next note about a learning curve — The Bokeh Control.

I have never used a lens like this before and, at first, it really threw my composition game for a loop. As I learned how to use the lens, I will admit that there were a lot of deleted shots in the review process. Like I mentioned above, the bokeh control lets you shift through seven levels of bokeh, with level one being pretty much the same as you’d see on a standard f/1.9 type lens and level seven pushing out the maximum bokeh effect. Since I wanted to treat this like a vintage-style lens, I shot at f/1.9 and cranked the bokeh dial all the way up to seven.

What I discovered is with a lens like this, you have to throw your conventional training for composition completely out the window.

To get things “in focus” at those settings, you effectively need to ensure your subject is dead center in the frame. Even if your camera tells you it is in focus near the edges with focus-peaking, once you take the shot, the borders will be filled with swirl and bokeh. When I treated the Petzval 80.5mm like any other portrait lens, I messed up a bunch of the early images until I managed to compensate for this. 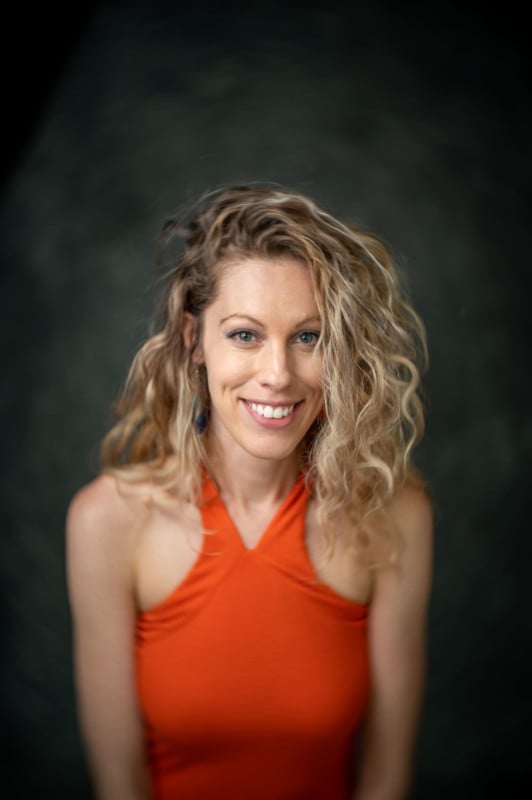 Once you shift your compositional thinking, taking photos with this lens can get quite fun with the 80.5mm’s soft focus and incredibly swirly bokeh patterns. 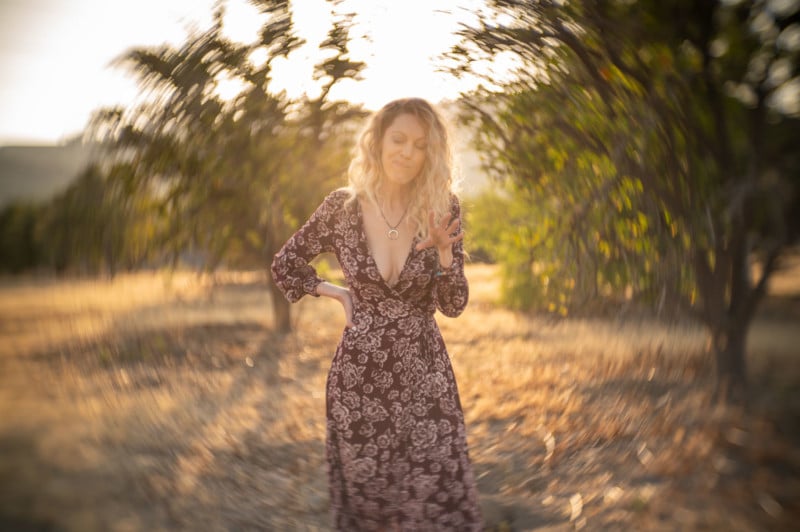 If you do happen to use this lens at f/4 or higher, it behaves and returns results like any other prime lens of that focal length on the market except for the very outer edges of the frame which will still show a small amount of tell-tale bokeh swirls and vignetting the Petzval lenses are made to produce. I did take a fair amount of shots at that f/4 to f/16 range and they were all very similar to the sample image below.

As long as you nail your focus, the image is sharp. Colors come out of the camera a little bit on the cooler side than normal, but that is easily compensated for in post if you want to warm things back up.

As you can see from the above examples, the difference from “normal” to “true Petzval” is pretty extreme, and I have to say… I kind of love it on the extreme end. The thing to keep in mind with this lens is if you use it the way it is meant to be used, only your “center mass” will be in focus. When you do so, your shots will be soft, dreamy, and full of incredible bokeh. 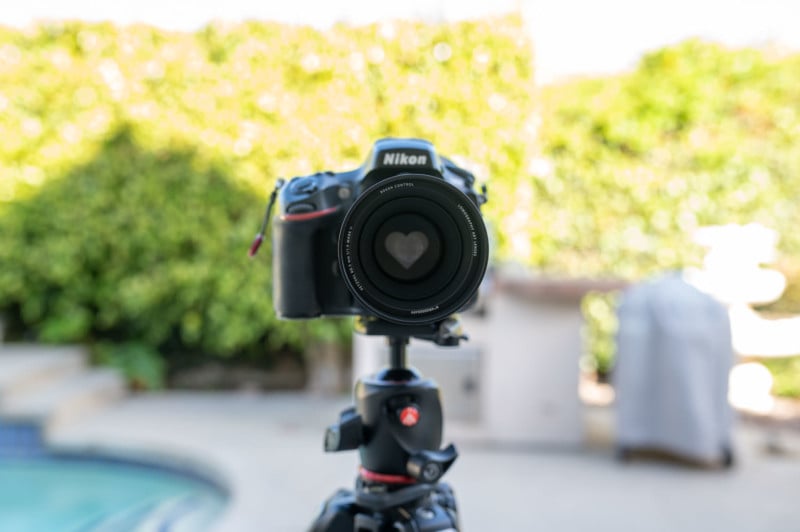 Additionally, if you want to get a little more creative with your bokeh patterns, the lens allows you to insert bokeh slides with some pre-cut shapes in them, shifting the patterns from the soft oval/circle to something entirely new. In the package I reviewed, the lens came with three inserts that allow you to add a star, diamond, or heart pattern to your shots as seen below. 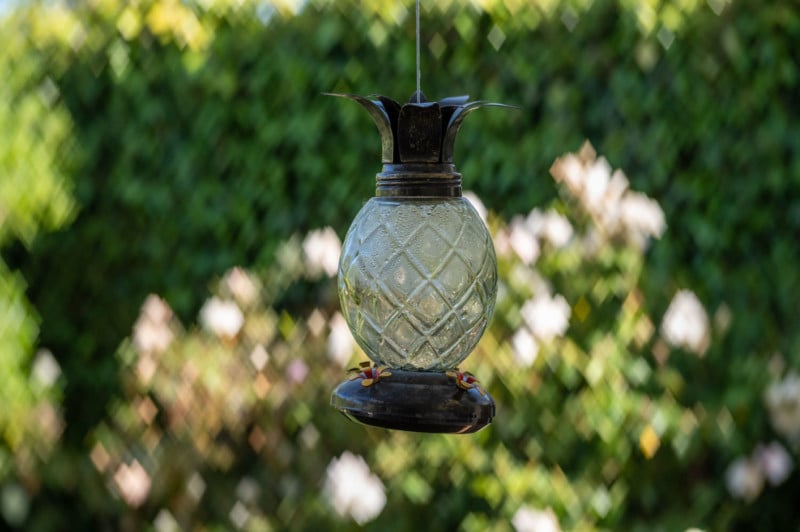 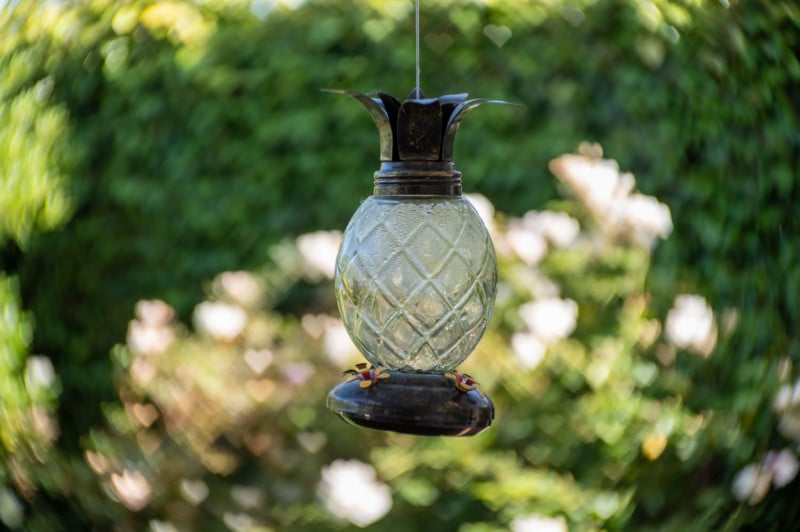 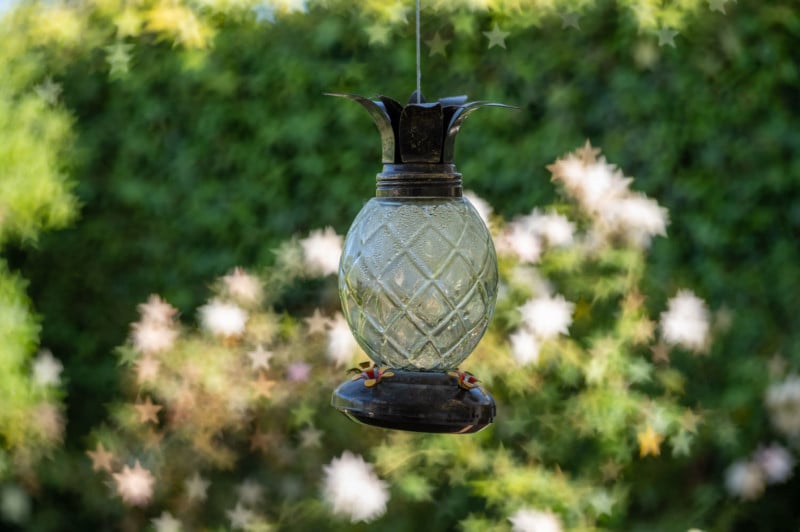 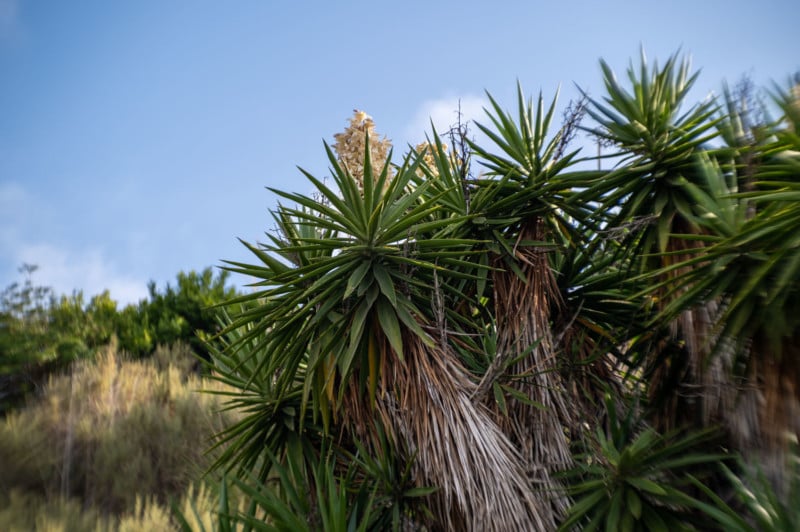 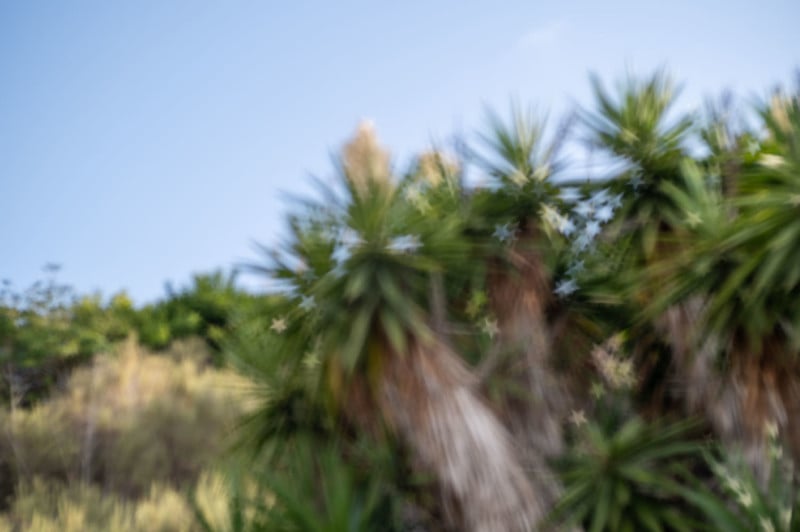 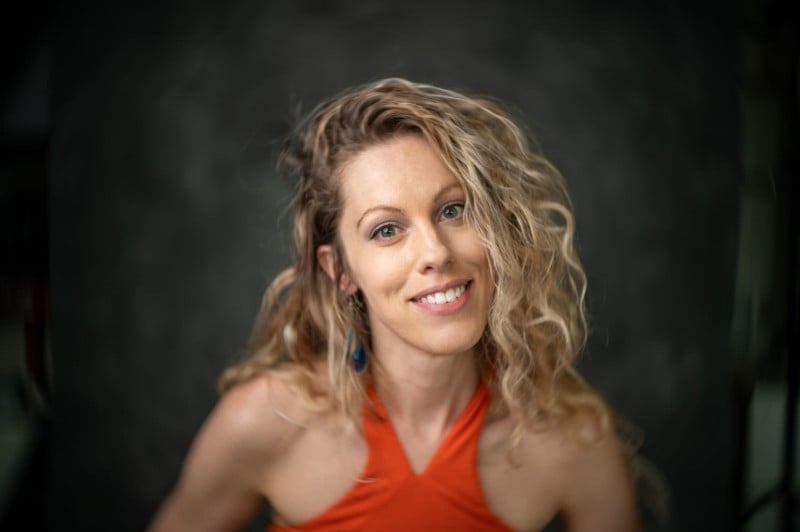 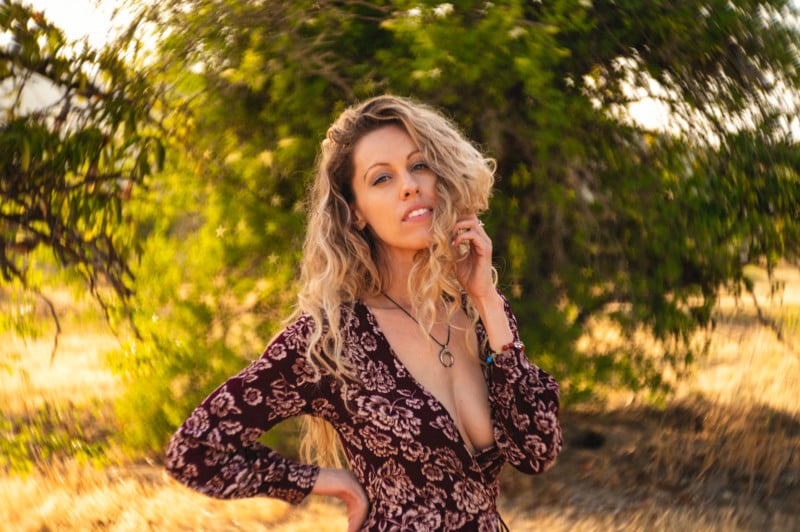 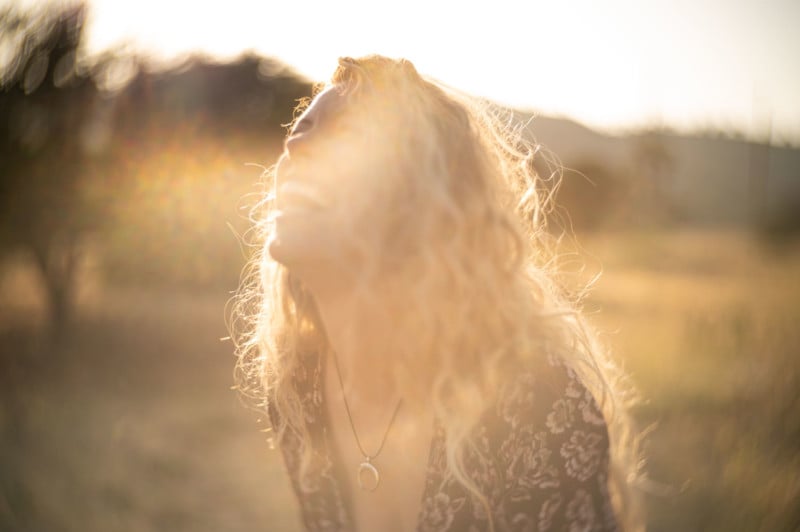 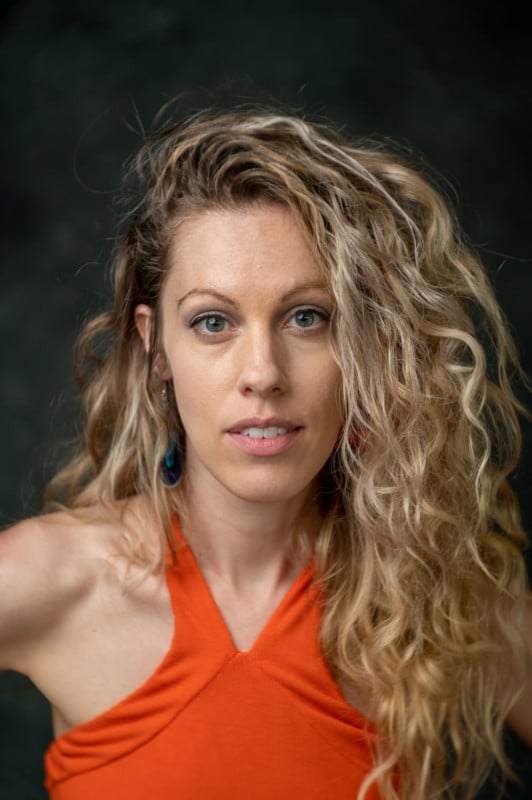 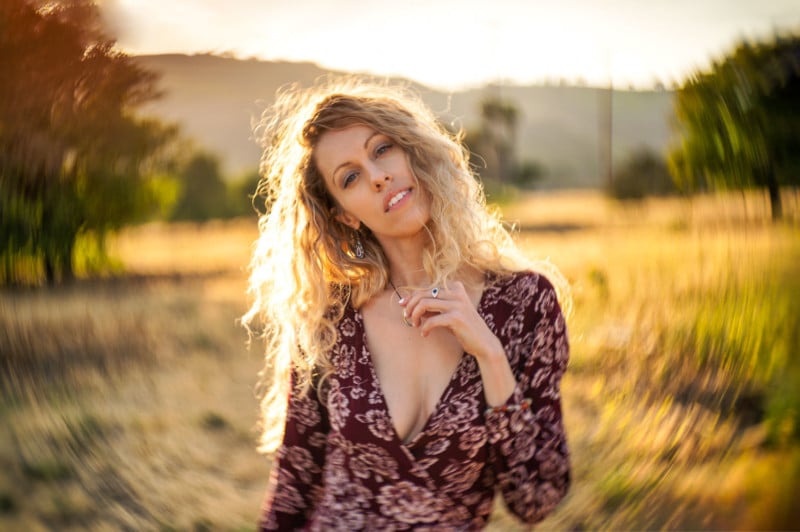 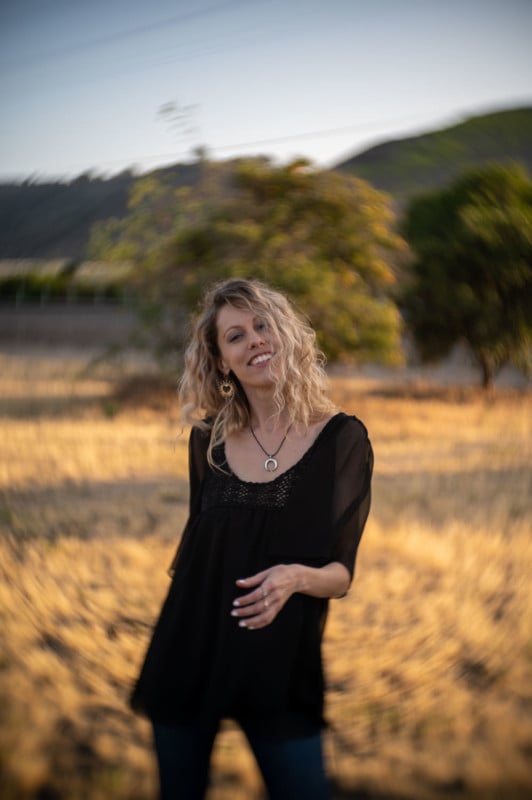 After nearly a year of not really shooting due to the pandemic, not only did working with this lens force me to adjust my subject framing mindset, it actually got me incredibly inspired to get out and shoot more as a whole. I found myself capturing more images of things I would have never even looked at previously as subject matter, all because of how the bokeh patterns can do such wild and interesting things.

The Petzval 80.5mm f/1.9 MKII SLR Bokeh Control Art lens is available from the Lomography shop for $549, placing it somewhere around the middle of other “normal” 85mm lens prices that range from $200 to $800. 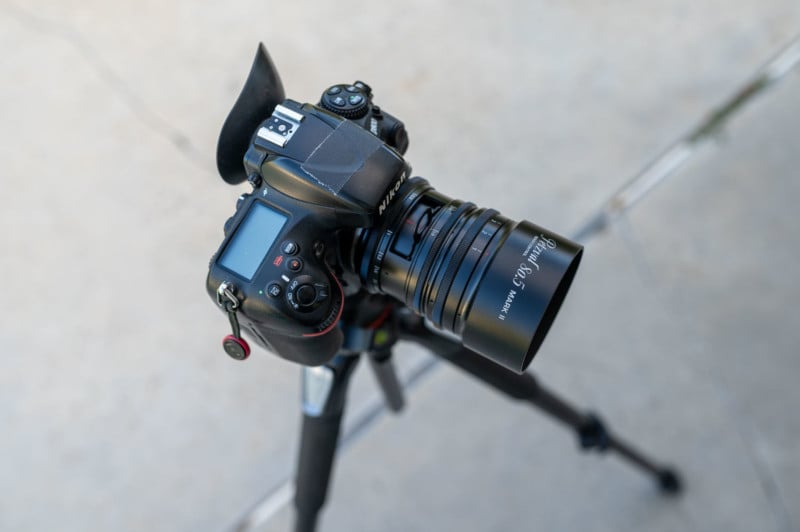 The Petzval lenses are a very niche style with the only real rival for something else as unique and interesting as the Lomography lenses would be the Lensbaby lineup, and while Lensbaby has some incredibly fun and interesting products, I don’t believe they have anything that truly competes or compares to the Petzval bokeh patterns, nor this lens’s flexibility or sharpness.

Yes. The Petzval 80.5mm f/1.9 is suitable for both professional as well as creative reasons, and — perhaps most importantly — it’s just a blast to shoot.

This crazy light painted silhouette was shot in just a single long exposure
How to Do Street Photography with a Smartphone
Texture vs Clarity vs Dehaze | In a Lightroom minute
Comparing the Max Power of Godox Strobes, Speedlites, and LEDs
Simple Way To Apply a Cinematic Color Grade in Photoshop!