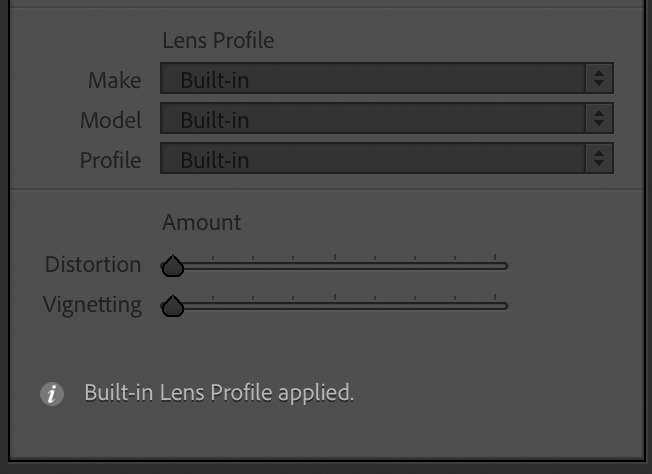 I’ve consistently been annoyed by the non-removable lens profiles in Lightroom when using Nikon Z cameras. But with some of the newer Z cameras and certain lenses, the issue (mostly) no longer applies. Here’s what I know at the moment.

The short version of the story is that with the Nikon Z6 II and Nikon Z7 II specifically, the distortion profiles can now be turned on and off for at least the following lenses:

Whereas with at least the following lenses, it still applies, no matter what camera you’re using:

I no longer have most of the other Nikon Z lenses and can’t confirm which category everything falls under (crowdsourced tests would be appreciated!) but the general idea is this. With the f/2.8 zooms as well as most or possibly all Nikon Z prime lenses, you can now turn off the distortion profiles in Lightroom – but only if you’re using the Z6 II or Z7 II. With other Nikon Z cameras, the distortion profiles are still automatically applied, no matter what lens you use.

So, that’s how the distortion profiles work now. But something of further interest – not totally new information but something that I don’t see mentioned that often – is that Lightroom is taking a strange approach to the vignetting correction with Nikon Z lenses.

Rather than the built-in lens profile automatically applying a certain amount of vignetting correction, Lightroom actually reads how much in-camera vignetting correction you selected. Puzzlingly, it takes your in-camera selection as the un-erring truth and applies it to your photos, without allowing you to change this value within the Lens Corrections tab.

Of course, the Effects tab further down in Lightroom has its own vignetting tool, but it tends to work better for adding vignetting rather than precisely removing it. So, my recommendation for Nikon Z shooters is to keep the vignetting correction in-camera turned to High, even if you’re shooting .NEF files. That signals Lightroom to apply full vignetting corrections as part of the built-in lens profile. If the effect ends up looking too strong (a definite possibility), you can add back your desired level of vignetting in the Effects panel.

The vignetting weirdness is true regardless of the Nikon Z camera you’re using, as best as I can tell. Some documentation from Adobe or Nikon on how this works would be nice.

I understand why Lightroom would have some built-in corrections that are automatically applied to certain Nikon lenses, especially a lens like the 14-30mm f/4 that has almost fisheye levels of distortion. But the whole decision about non-removable profiles isn’t something I can get behind. Why not just apply these corrections automatically (including vignetting – not tied to the level selected in camera) and then allow us to turn them off if we want? At this point, I don’t know if it’s Adobe or Nikon who is at fault, but the situation has gotten very strange.

We’ll be updating our Nikon Z lens reviews over the coming days to reflect the different behavior with the Nikon Z6 II and Z7 II. Meanwhile, if you happen to have a Z6 II / Z7 II and any of the lenses I haven’t been able to test, I’d appreciate some info in the comments section so I can add to the lists at the start of the article!