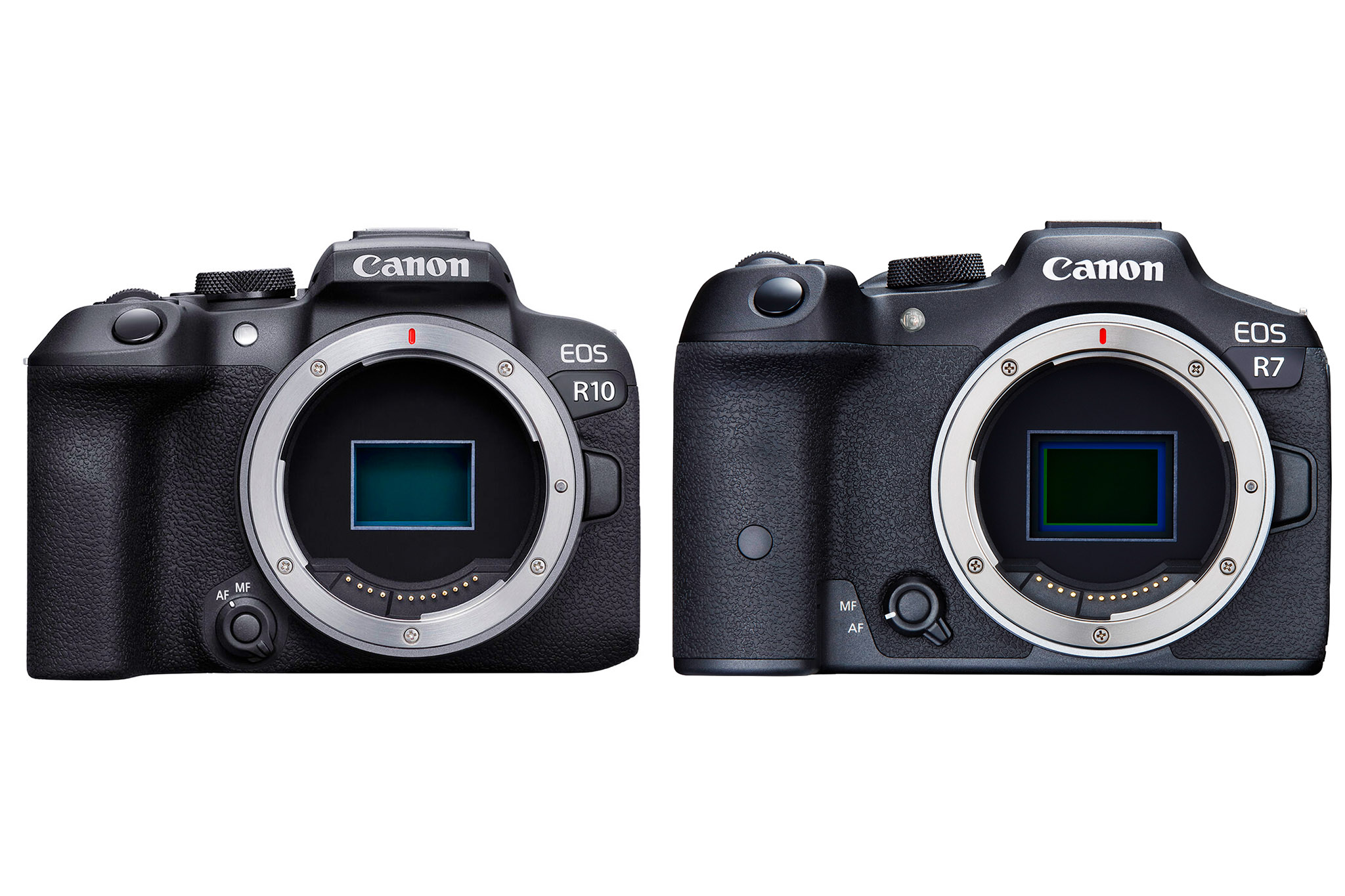 Canon’s newly-announced EOS R10 and EOS R7 are both aps-c cameras and part of the mirrorless R System. Although they share some similarities in features, they’re aimed at separate audiences and have plenty of important differences. This article compares the two cameras, including their construction and detailed specifications.

The EOS R10 is a midrange camera that’s more consumer-oriented, whereas the EOS R7 is a more advanced camera with a heftier build quality. Neither camera is particularly large, but the EOS R10 is the more portable of the two. The following images are to scale.

Alongside the differences in size, the EOS R7 also has a slightly more advanced control layout. Note the additional dial on the back and the dedicated ISO button on the top of the EOS R7. These features will be appreciated by advanced photographers who want quick manual controls. That said, the EOS R10’s layout is still reasonably advanced, including a dedicated AF-On button and joystick that are usually found only on higher-end cameras.

Below is a detailed comparison of the features offered by the Canon EOS R10 and Canon EOS R7:

The EOS R7 clearly has more wins of the two cameras, other than price. The most important benefits of the R7 are the higher-res sensor, dual card slots, bigger buffer, and in-body image stabilization. A headline difference between the two cameras is 23 FPS shooting on the EOS R10 compared to 30 FPS shooting on the EOS R7, although personally, I think 23 FPS is already enough for 99.9% of applications. Remember that 24 FPS is already considered video.

Other differences here and there may be relevant to the types of photography that you do. The EOS R7 has better battery life, while the EOS R10 is smaller and more portable, as the construction comparison showed. The weather sealing and video features on the EOS R7 are also a bit more advanced than on the EOS R10.

Of course, the EOS R10 is lower in price by $520. That’s a lot of money to save, or to spend on other gear like a better lens or sturdier tripod. I’ll put it this way: a 24 megapixel camera with a good lens and a stable platform will give you sharper images than a 33 megapixel camera without them, every time.

Which one of these cameras would I recommend? The choice is actually pretty easy. If you’re planning to use this camera for advanced or even pro-level sports and wildlife photography, I would pick the EOS R7. The higher resolution lets you put more pixels on a distant subject, while the bigger buffer lets you take longer bursts of images before the camera slows down. Other features like dual card slots and better weather sealing are also nice to have.

Meanwhile, if you don’t plan to photograph those subjects very often – or even if you do, but you’re on a budget and want to put more money toward lenses – go with the EOS R10. It’s still extremely capable for sports and wildlife, thanks to the high frame rate and essentially the same autofocus system as the EOS R7. The R10’s 24 megapixel resolution also isn’t too much lower than 33 MP anyway, so landscape and other photographers don’t need to worry.

I hope that helps you choose between the Canon EOS R10 and EOS R7. Both cameras should be very capable in the right hands, and neither one is a bad choice even though they’re geared toward different photographers. Let me know below if you have any questions about how the two cameras measure up.