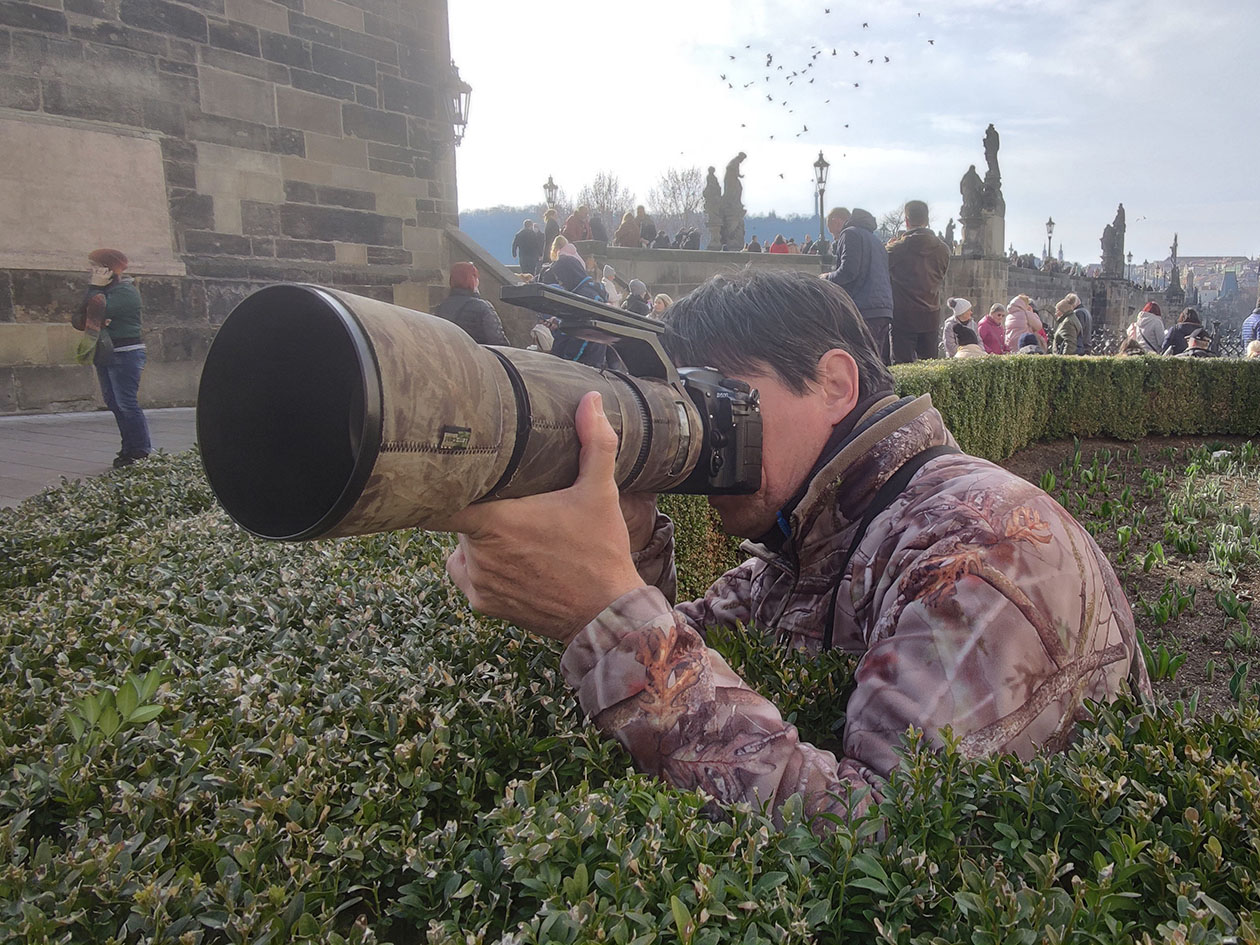 There’s one big link between rats and pigeons. Although the species are separated by millions of years genetically, they are drawn together through their shared affinity for humans. Most humans, by comparison, have very little affinity for either species! But as a biologist and photographer, I’m always curious about how their lives are intertwined with ours – and, of course, if it’s possible to take good pictures of these ubiquitous animals. So, join me as I tell a story of urban wildlife photography, with pigeons and rats as the subjects.

Neither rats nor pigeons co-evolved with humans, but over time, they have discovered that we humans are not such bad companions – or sources of food and shelter. The result is that the Domestic Rat (Ratus norvegicus) and the Feral Pigeon (Columba livia “domestica”) have become some of the most successful species on the planet.

I went to the city center of Prague one morning to photograph the city’s birds with my friend Tomas Grim, a scientist and birder who belongs to the elite group of the 3% most cited scientists in the world. As part of gathering images for his forthcoming book, we planned to photograph birds against a manmade backdrop – to find the connection between the human and bird worlds.

It wasn’t just pigeons that we had in mind – just any connection between birds and humans. For example, it could be a blackbird nested in the arms of a Czech national hero (a statue of him, at least). Or a heron fishing together with people sharing the same boat.

We warmed up a bit by photographing a dummy owl that we noticed on a kindergarten building. These fake owls are meant to discourage woodpeckers from digging their cavities into the soft polystyrene of the facade. (A mostly futile effort, by the way. Birds aren’t so stupid that they fall for this cheap trick.)

Next, we headed to Vyšehrad, a place with castle ruins and rat burrows. A short distance from the ruins, someone had dumped a whole pile of bread. It was an offer that was simply irresistible to the local wildlife. Some of it disappeared into the stomachs of pigeons, magpies and nutria, but most of it went underground, into the rat burrows.

All I had to do to get photos at rat’s-eye level was climb over one gate, lie down near the burrows, and wait until they accepted my presence. It didn’t take long for the rats to bring more slices of bread to their burrows. As they carried the bulky food in their mouths, they jumped almost like kangaroos – an absolute wildlife experience in practically the center of Prague.

Then we went to another Prague landmark, the Charles Bridge. At this point, pigeons perched on the surrounding statues caught our attention. The statues seemed to communicate directly with the pigeons. From the expression of their bronze eyes, I got the feeling that they were not quite thrilled by the presence of the feathered creatures.

Here, too, the interplay of people and wildlife was unmistakable. The pigeons stayed static, immune to the people walking by, until children would run around and scare them into flight. When they flew, the surrounding environment told another story, another layer, like in the image below with the Ukrainian flag and the words “Hands off Ukraine, Putin.” It’s a photo that could not have been taken without a meeting of worlds: pigeon and people, people and war.

We really immersed ourselves in the photoshoot, and it took us a while to realize that we had become a bit of an attraction ourselves. People were taking pictures of our efforts and having fun at our expense. And why shouldn’t they? We were two camouflaged weirdos with big cameras rolling around on the ground – tiptoeing around, and crouching behind a hedge (or in one).

One foreign tourist even brought an instant camera and took a Polaroid of us in action. And now the image below is very meta.

Well, what can I say? That’s the way it should be. Photography should bring joy, not only to us, but also to the people around us.

The OG App Turns Instagram Back into the App Photographers Once Loved
Lens vs Camera: What Should You Upgrade First?
Sony’s New Crop-Sensor FX30 is an Easy Entry into its Cinema Line
Opening Multiple Photographs into a Single Photoshop File
Sony officially announces the new FX30 APS-C cinema camera – basically an FX3 with a Super35 sensor