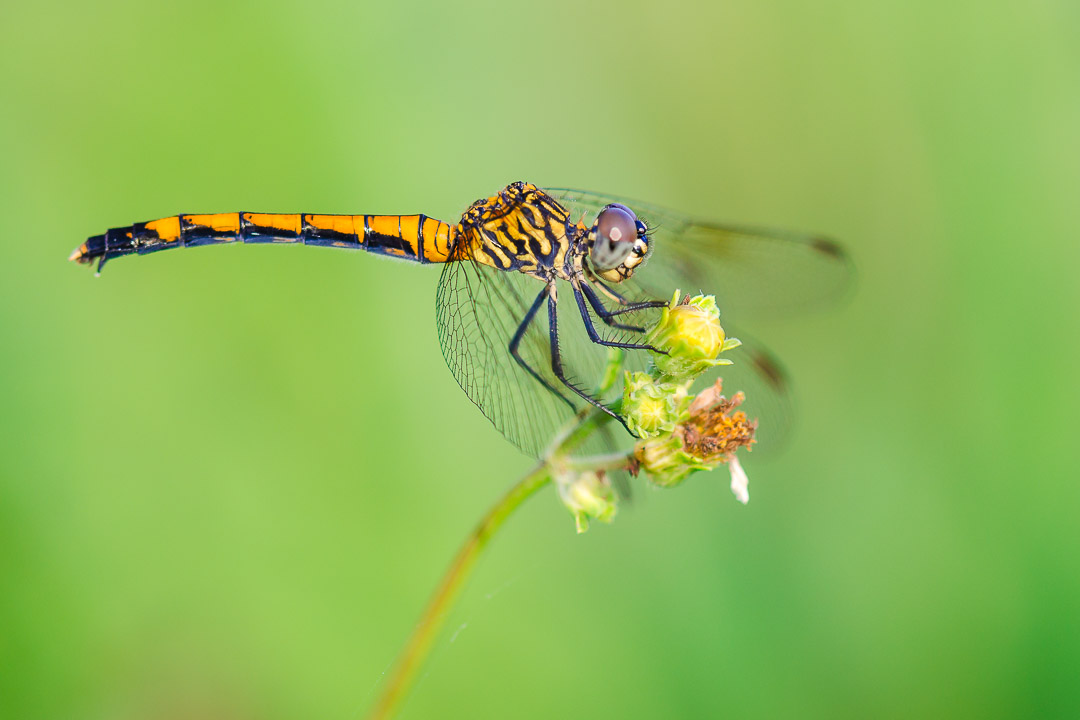 When I started out in photography, I found myself frustrated with the kit lenses for my Nikon D5100 DSLR. I kept getting blurry pictures with both lenses, especially the 55-300mm DX telephoto. At the time, I desperately felt that I needed to upgrade the lens or else be doomed to take blurry photos forever.

Of course, today I realize it wasn’t the lens that led to the blurry photos, but my lousy skills as a photographer. I didn’t entirely understand the problem of motion blur with telephotos. And so, without knowing what I was doing, I sold the 55-300mm DX, switching to Nikon’s 105mm f/2.8G macro lens instead.

For what it’s worth, I love that macro lens. On unreasonably hot and humid mornings, adorned with mosquito bites, I’ve taken many of my favorite photos with the Nikon 105mm f/2.8G. It’s probably the most-used piece of equipment in my camera kit and certainly the one I’ve kept the longest. But at first, it didn’t live up to my pre-purchase expectations.

Why not? Because somehow, I had convinced myself that the 105mm macro would be sharp enough to fully replace the 55-300mm DX. Yes, I believed that when I needed a 300mm perspective, I could just crop the 105mm and get sharper photos anyway! My expectations were sky-high, because I had read so much praise about the sharpness of the 105mm f/2.8G. Of course, even though it’s a sharp lens, it can’t perform miracles.

That brings me to the central dilemma of this article. Photographers constantly hear about how important lenses are, and how unimportant cameras are by comparison. The usual advice is “date the camera, marry the lens.” (I might extend that to: “date the camera, marry the lens, sign a blood pact with the tripod.”) But how often will you really see a major improvement with a better lens? Can’t it be smarter to upgrade an aging camera instead?

If you’re trying to figure out what some of those improvements are, here’s a list of the big ones:

Lenses get all the good press when it comes to taking sharper, more detailed photos, but cameras absolutely play a role here, too. For instance, here’s a comparison between the 24-megapixel Nikon Z6 and the 45-megapixel Nikon Z7 with extreme crops (click to see full size on desktop): 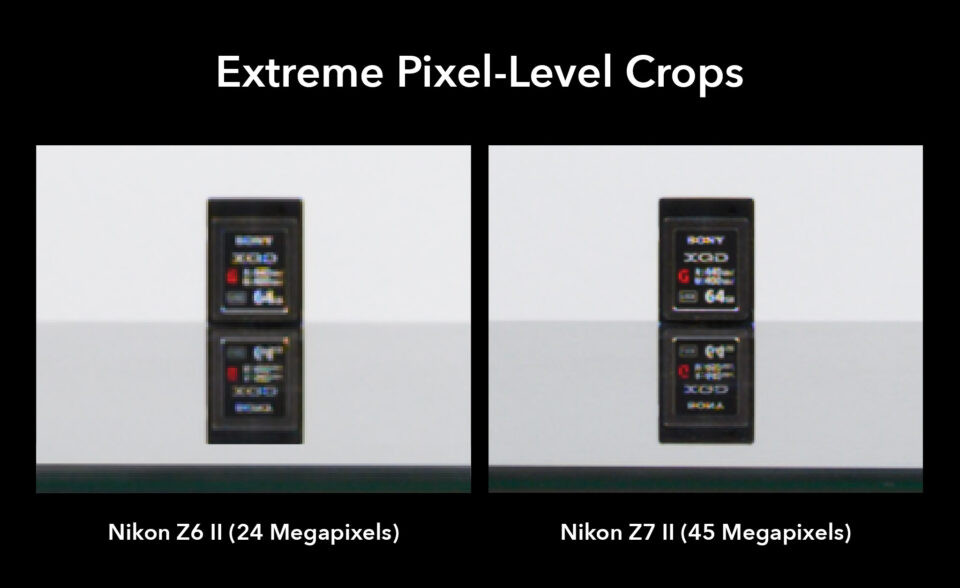 Those photos were both taken with the 24-70mm f/4 kit lens, although granted I extracted the crops from the center of the image at f/5.6 where the lens is the sharpest. Clearly, if your lens is sharp enough, a higher-res camera can make a substantial difference to the photo’s detail.

As for lenses, it strongly depends on the aperture values you intend to use. Most lenses are “sharp enough” at landscape photography apertures like f/8 through f/16 (full-frame equivalent), whereas they lose detail wide open. Not to mention that for other genres of photography, like sports or wildlife, corner sharpness matters little compared to center sharpness, since the corners are generally out-of-focus or unimportant.

The most demanding subject for lens sharpness is probably astrophotography, since you’re trying to render small points of light as sharp as possible across the entire frame – including in the corners – at wide-open apertures like f/2.8. Below are two extreme crops from f/2.8 in the corner, one from a sub-par astro lens and one from a high-end alternative:

Ultimately, if your main goal is sharper photos, the top thing to improve is probably your technique. But barring that, it’s mainly a question of upgrading whatever part of your camera kit is weakest at the moment.

If you have solid lenses, get a higher-res camera. Don’t waste your attention lusting over a Zeiss Otus or Nikon Z 58mm f/0.95. On the other hand, if you already have a high-res camera – especially if it’s over 24 megapixels – that’s plenty. You’ll capture more detail with better lenses, instead of spending thousands on a camera that has a few more megapixels.

Finally, if you already have good lenses and a high-res camera, what are you waiting for? Sign that blood pact and upgrade your tripod!

It’s not a secret that some cameras are better in low light than others. Theoretically, a full-frame camera improves upon an APS-C camera by about 1.3 stops of light. (In practice, the difference is about 1-2 stops depending on the specific cameras you’re comparing.)

Granted, the improvements aren’t always this dramatic in practice. Most kit lenses have vibration reduction whereas most 50mm primes don’t (although that only helps for nonmoving subjects). Or, perhaps you don’t want to shoot at f/1.4 anyway, if you need more depth of field for your shot. The real-world improvement depends on the circumstances at hand.

Even so, lenses tend to be the best way to improve low-light performance. If you shoot in very low light, like astrophotography, you’ll probably want to upgrade both eventually. But I’d usually start with the lens.

Upgrading your camera won’t always take a weight off your shoulders, but it certainly can if that’s what you care about. The obvious way to save weight is to switch from a DSLR to a mirrorless camera, but even in the DSLR world, some camera lines get slimmer with each generation.

Something similar is true of lenses. Lots of high-end lenses weigh more than their cheap counterparts, whether because of a wider maximum aperture or simply more optical corrections. But in some lens lines – telephotos especially – you can save a ton of weight by upgrading the glass. An obvious example is Nikon’s 300mm f/4 PF lens, which weighs about half as much as the previous version! (755 grams versus 1440 grams to be exact.) Along similar lines, most mirrorless lenses weigh less than their DSLR counterparts.

So, if saving weight is your top priority, which should you upgrade first? For better or worse, the way to get maximum weight savings in today’s world is to use a mirrorless camera with native mirrorless lenses. That starts with the camera – so, I’d upgrade the camera first, if you’re not already using mirrorless.

The exception is if you’re a wildlife photographer with a big, old telephoto lens. In that case, the few hundred grams you’ll save with mirrorless are nothing compared to how much you’ll save with a newer, lighter version of your lens, even if it keeps you in the DSLR world for longer.

Usually, when photographers talk about trying to focus faster, it’s usually in a discussion about cameras. And the differences can be dramatic from camera to camera – not just in pure focusing speed but also in tracking subjects across the frame. Between my personal Nikon Z7 and the flagship Nikon Z9, I’d pick the Z9 any day for wildlife photography, regardless of the lens (just give me something with 300mm+ and autofocus).

But lenses still play a crucial role in autofocus performance, especially in autofocus speed. A classic example is the difference between the Nikon 200-500mm f/5.6 and the Nikon 500mm f/5.6 PF. Both lenses have the same maximum aperture and 500mm focal length, but the zoom lens has a much longer focusing throw. It’s still a great lens, but it’s slower to focus compared to the prime, no matter what camera you put them on.

Lenses also impact your focus performance because of their maximum aperture. A 70-300mm zoom that maxes out at f/5.6 on the long end will only capture one fourth as much light as a 300mm f/2.8. In dim conditions, that makes a huge difference in focusing performance.

I’d still go with a camera upgrade most of the time if bad focus performance is the bane of your existence. (Or, again, a skill upgrade.) But don’t ignore the lens side of things. If you’re already using a well-regarded sports/wildlife camera, you might get more focusing improvements with a better lens rather than iterating up to the next generation of the camera.

With a new camera, you’ll often find it easier to capture certain subjects – again, like the previous example of autofocus. Features like face-tracking autofocus for portrait photography, illuminated buttons for astrophotography, large image buffers for wildlife photography, and so on, can make almost any genre of photography easier.

But lenses have the real advantage here. If you’ve only ever used a kit zoom, a 300mm or 500mm prime will let you take wildlife photos that would have been impossible before. A macro lens (or extension tube) can open up an entire world of subjects. Same with an ultra-wide, a tilt-shift lens, a wide-aperture prime, and so on.

Whereas a camera upgrade can make your subjects easier to photograph, a lens upgrade can give you entirely new subjects to photograph in the first place. To me, that was the best thing about swapping my old 55-300mm DX lens for the 105mm f/2.8 macro when I was starting photography. It wasn’t the sharpness boost or the better low-light performance – it was the ability to take macro photos, period.

Maybe you’re already happy with the range of subjects you photograph. Or maybe in your specific situation, upgrading the camera is what will expand your horizon of subjects (like switching from a smartphone to a DSLR or mirrorless camera in the first place).

Still, for most photographers, this reason – probably more than any of the rest – is why I often suggest upgrading your lens first. Simply put, it can impact the creative side of photography more than the camera, allowing you to photograph all sorts of new subjects for the first time.

Then again, I still think most photographers should upgrade their skills before focusing on gear! Most cameras and lenses today are already very capable, and maybe you don’t need any new gear at all right now. It’s a never-ending process to learn composition and light, and especially how to put them into practice to capture better photos. But mastering those concepts will take your photography further than any piece of equipment.

Either way, if you’ve been itching to upgrade your camera or your lens, hopefully this article helped clarify the answer.

Photography News: Laowa 2x Macro Lens Announced, MacBook Pro Sale
Use Canon Lenses on Nikon Cameras with Meike’s EF to Z-Mount AF Adapter
The Two People in Every Photo, According to Ansel Adams
Capture One for iPad now supports both wired and wireless tethered shooting
This innovative new light design is both waterproof and inflatable