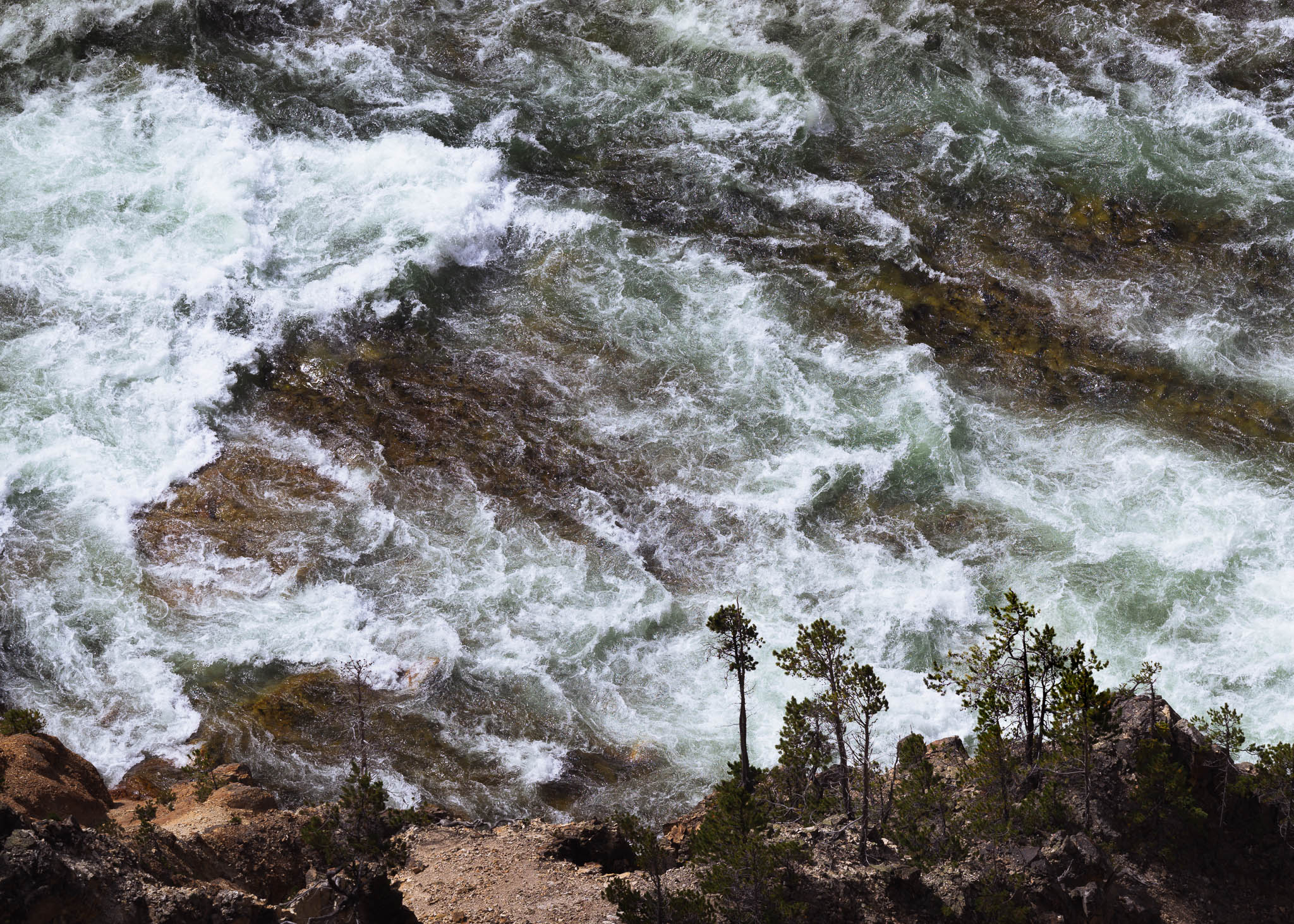 A couple of months ago, I took an abstract/intimate landscape photo that I was happy with, and some people have asked me how it was made. It’s a somewhat tricky image to parse, so today I thought I could go behind the scenes and show how I took it.

I call the image The Rapids of the Yellowstone River. That should give you a pretty good hint about the content of the photo if you’re trying to figure out the scale of the scene and exactly what’s going on here.

How did I arrive at this photo? Where was I standing in order to get this perspective? Let me harken back to my article about the refining process and go through some of the images that led up to this one.

This is one of the first photos that I took from a particular overlook in Yellowstone National Park. If you’ve ever been to Yellowstone, there’s a good chance you visited Yellowstone Falls – a picturesque waterfall in the heart of the park. Taking photos of Yellowstone Falls is hardly an unusual thing to do, and I don’t think my photo here stands out at all considering the boilerplate composition and midday sunlight.

Realizing that photos of the waterfall itself wouldn’t be enough to satisfy me, I started looking for some details to photograph instead. This entire area of the park – known as the Grand Canyon of the Yellowstone – has beautiful colors in the rocks and trees. But I don’t think the photo above is particularly interesting. The blown-out area of rapids at the top left is distracting, and the whole bottom-right of the composition is an uninteresting mess. Not to mention the lack of a clear subject.

As I searched for better compositions, what caught my eye were the colors of the riverbed. They were some of the most beautiful earthy tones that I’ve ever seen in a riverbed (and this was without a polarizer, too). I think this photo is a distinct improvement over the other two so far. It still doesn’t have the clearest subject, although the dark pine tree leaning over the water is close. There aren’t as many distractions in the composition, either. But there were still better compositions to be found.

An Aside – Some Context

If you’re wondering how this landscape looks in an unedited smartphone photo, it’s something like this:

I hope that gives you a good sense of context for where I was standing when I took these shots – specifically, on the edge of a canyon! (Although safely behind a fence.) What makes the final photo somewhat unusual for one of my portfolio images is that I took it on a sunny day from a popular overlook in the middle of a National Park. It goes to show that you can never count out a location even if you’re after something unique.

After searching around for better subjects, I noticed a set of trees that are actually visible in the iPhone photo above. Here’s a bit of a crop to show the trees I’m talking about:

Even from the wide-angle iPhone photo, you can probably tell that these spindly trees stand out well against the rapids of the Yellowstone River. I was really thrilled when I noticed them and immediately started honing in on new compositions. The first step was to reposition myself off to the right, where the rock in the foreground was no longer blocking some of the trees, and there was a better view of the rapids.

Although I really liked where things were going, this photo lacked the swirls of the rapids that attracted me to the scene in the first place. But the colors, subject, and general composition were all improvements over my other attempts so far. I also realized that the constantly-changing rapids were blending into the trees on the right in this particular image. I had hoped for a bit more subject separation.

After zooming out, I ended up taking about two dozen photos of this scene with slightly different compositions. My main goal was to get a photo where the rapids were relatively bright behind all the trees. Ultimately, I was happiest with this photo out of the bunch. Feel free to click it to see a larger size: 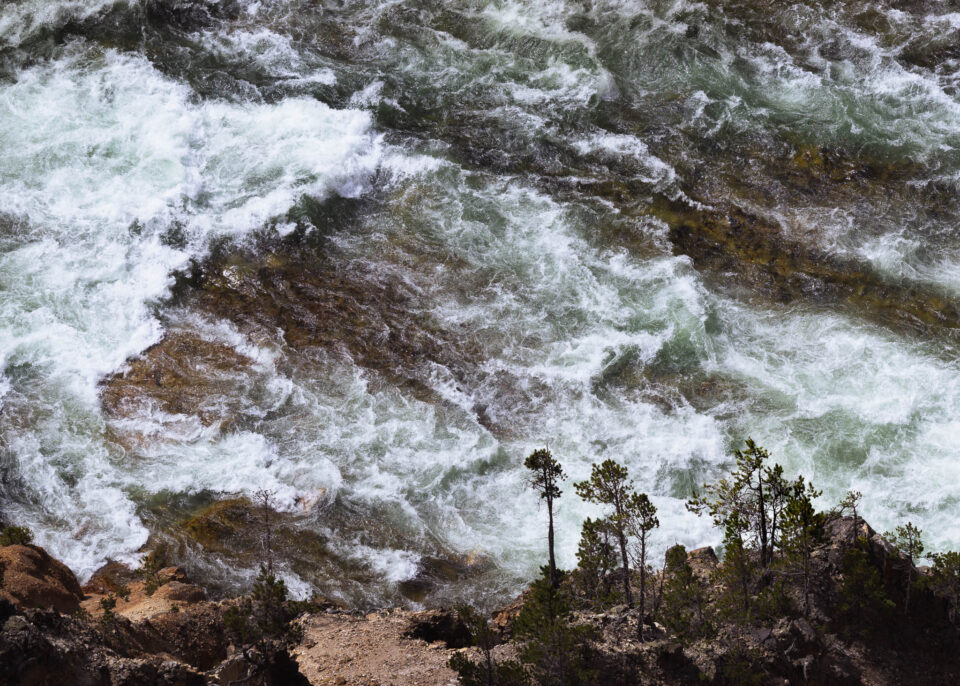 To me, it harkens back to some classical landscape paintings because of the tones and chiaroscuro in the photo, largely thanks to the colors in the riverbed. And, I should add, thanks to the light – harsh, midday sunlight from about 11 AM. It’s normally not the light for landscape photography, but here, it adds great shadows to the rapids and the riverbank.

My post-processing on this photo was minimal. I did a bit of dodging to the rapids around the right-most tree, and I did a bit of burning to the sunlit rocks in the foreground that were distracting the eye. I also cropped to this composition from a wider scene to match my favorite composition (it’s still over 24 megapixels, don’t worry, pixel peepers :).

Cropping obviously sacrifices some resolution, and I try to avoid it as much as possible. But even though I took some photos here that wouldn’t have needed cropping, I chose this one instead for a simple reason: subject separation. Out of every photo I took from this spot, the trees had the best separation against the rapids in this one. To me, the silhouetted trees are what ground this entire photo, so it was an easy decision. Composition always comes first!

I hope you found this behind-the-scenes detour to be interesting. This beautiful scene along the Yellowstone River reminded me not to fear midday sun as a landscape photographer, and to keep an eye out for unusual, abstract scenes everywhere I go, especially at popular spots. Let me know in the comments if you have any thoughts or similar stories about photos of yours!