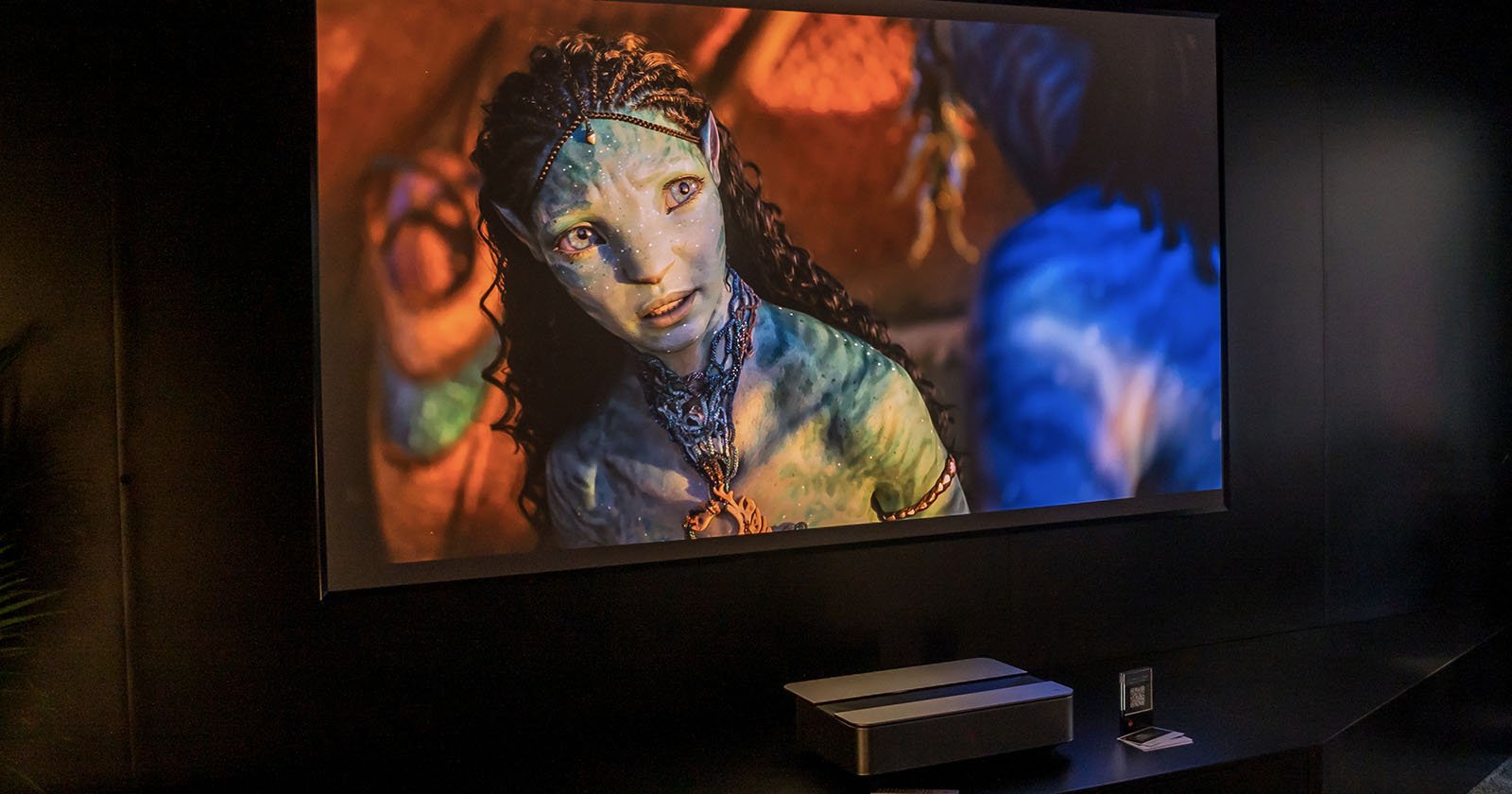 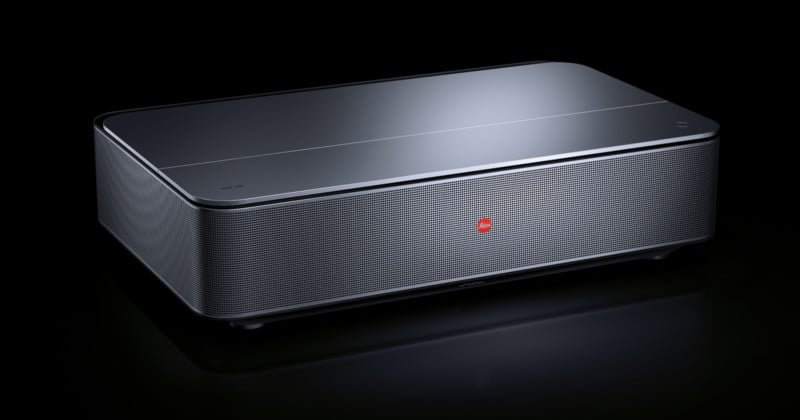 Leica making a TV seems very out of place, and yet, it showcased its new Cine 1 Laser TV at CES this week, opening a new product category the brand says it’s committing to going forward.

While it might still come as a surprise to many, Leica telegraphed its plans to get into home entertainment last year when it announced it was partnering with Hisense to make laser TVs.

Why a TV when it has nothing to do with Leica’s core competencies? The Cine 1 Laser TV is an ultra-short throw projector that incorporates a TV tuner (NTSC/ATSC/Clear QAM) and was built to be huge. There are two options: 100-inch or 120-inch. Go big or go home, as they say. It’s a native 2K that upscales to 4K with a “state of the art” 0.47-inch digital light processor (DLP).

In an interview with PetaPixel, Stephan Albrecht, Leica’s managing director, says the device is the first it has produced thanks to that collaboration with Hisense, which offered the camera brand access to its TV technology while Leica brought in its imaging and optical know-how in the form of a special Summicron lens. Leica has also been involved in projection tech under its Pradovit brand before. 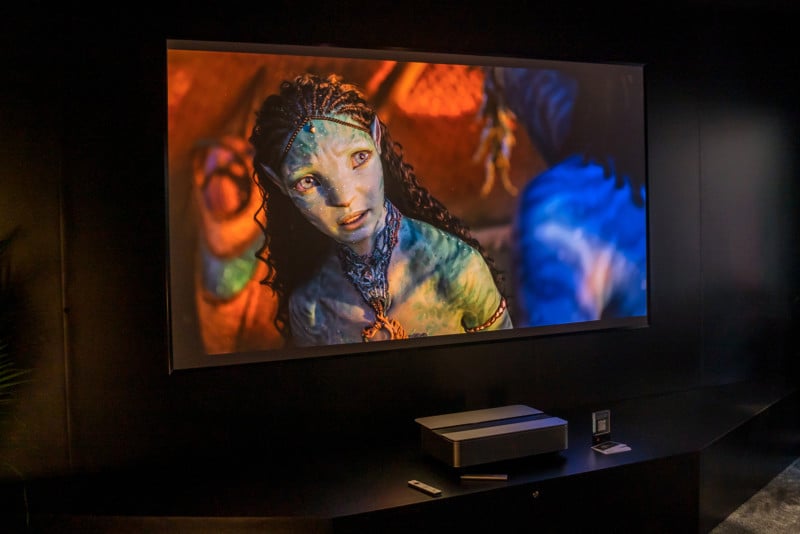 The Cine 1 incorporates three lasers, one each for green, blue, and red, to broaden the color space compared to a standard TV. The signals then align as closely as they can to the colors coming from the lasers to make the picture look like the director intended. Leica’s own image processing in the Leica Image Optimization (LIO) puts algorithms to work to help make content look even better. Looking at the TV myself, I could tell there was a richness to the colors that didn’t appear saturated or processed. Vibrant with a hint of subtlety. It’s not clear if the Laser TV supports HDR formats or not. 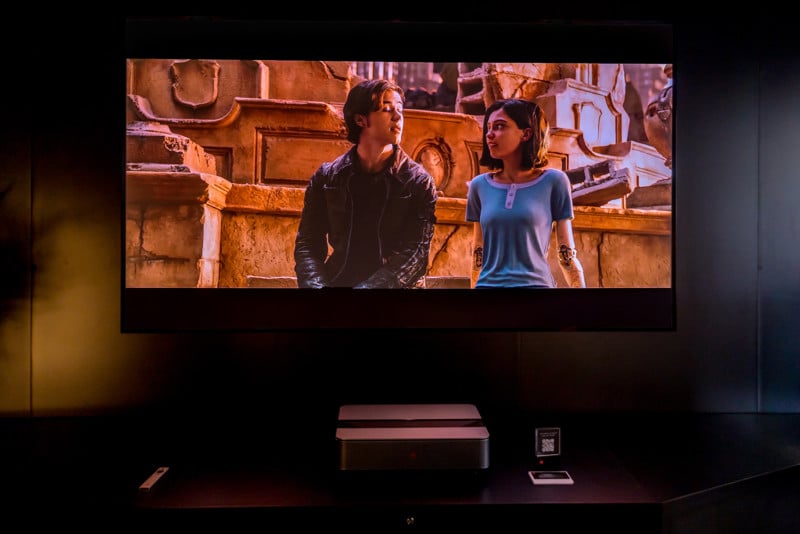 Leica didn’t implement any specific profile or “look” to the screen, like it has so often done with its cameras in smartphones, but instead, it tuned the visuals to what it thinks “provides the best experience for the customer.” That customer could always go into the settings and make adjustments or calibrate the TV however they like.

That’s only half the battle — the other half is finding a place to put it. With two huge screen sizes, options will be limited, even more so because the Cine 1 is very particular about where you place it. It’s got size and heft to it, and needs to sit below the screen at a set distance to stay in focus. From what I saw, Cine 1 was less than a foot away from the 120-inch screen. 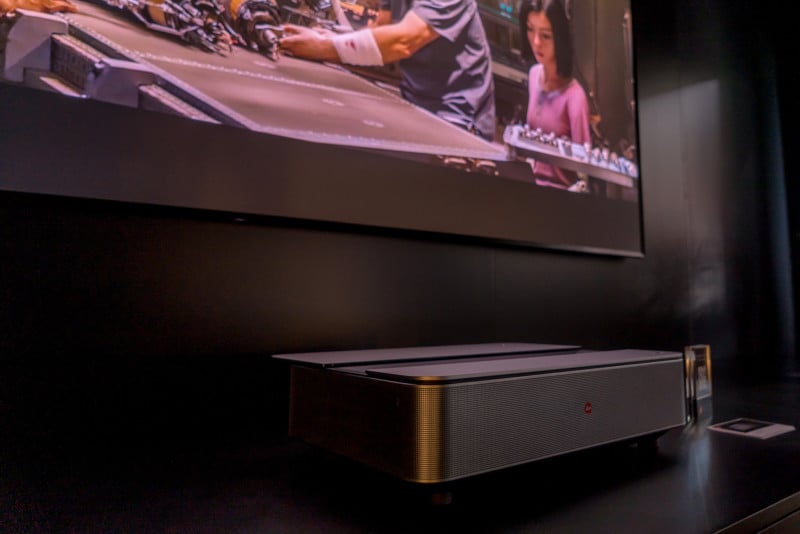 That all matters because there is no way to focus or refocus the lenses. You’ll know you’ve hit the spot when everything onscreen is nice and sharp by moving the projector. Albrecht noted that the included manual helps users figure out proper alignment to avoid it becoming a tedious back-and-forth process. Both units are practically identical, despite the different display sizes, with only the optics inside changing. They share the same features as well. 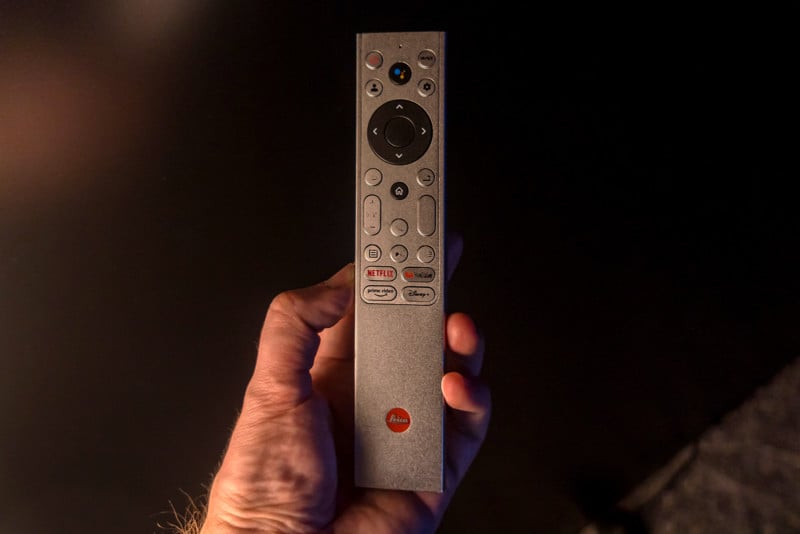 Albrecht also advises against projecting onto a plain white wall because a screen will better display the colors and detail. That’s true of all projectors anyway, but he suggested the effect on color, contrast, gradation, and black levels would make a wall too limiting.

As for connectivity, the Cine 1 will have “everything you would expect from a high-end TV.” That includes built-in 50W Dolby Atmos speakers and it will run on Google TV, giving it full smart TV functionality. Ports include three HDMI (one 2.1 eARC, one 2.1, and one 2.0), two USB-A ports, Ethernet, an RF tuner, optical audio (Toslink), and a 3.5mm headphone jack. It doesn’t have any WiFi or Bluetooth connectivity though, which is a notable exclusion, so users will have to connect via Ethernet to take the Cine 1 online.

Image credits: Header photo via Leica, all others by Ted Kritsonis for PetaPixel.